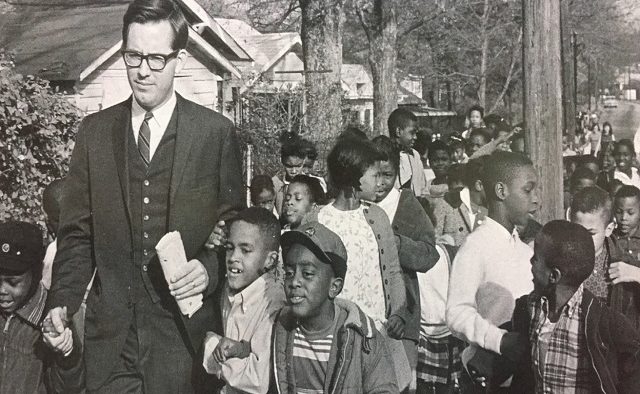 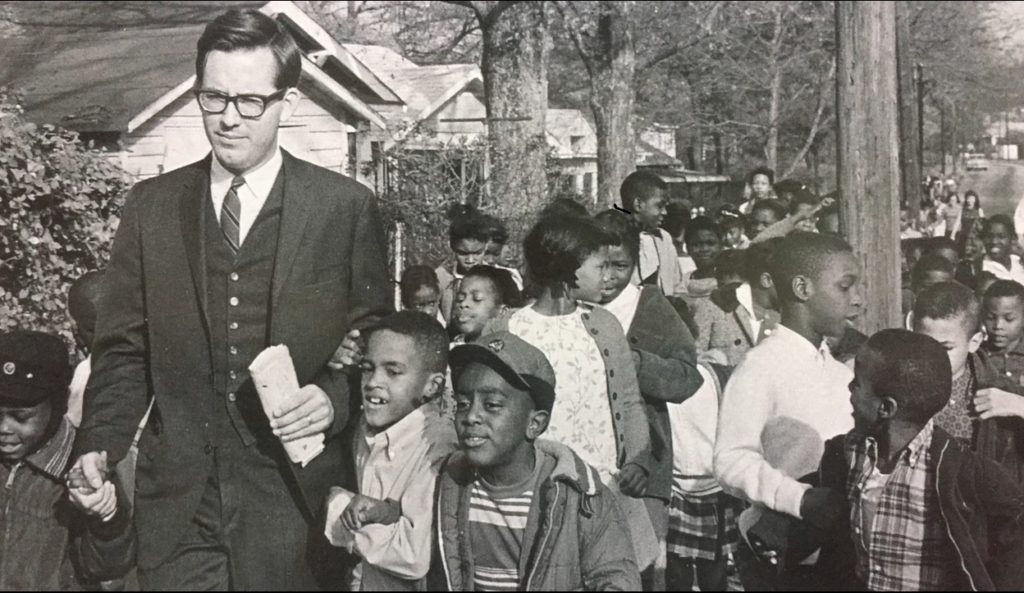 A photo used in “The Turning Point.” The photo is from the church’s archives showing the church in the 1960s.

When members of a Decatur church began making a film about racial integration in 1960s, they thought they would be telling a story about their history. But as racial tensions heightened in the country over the last year, they realized it was just a pertinent today as it was 50 years ago.

“It’s not just about history. It contains a message for today,” said Oakhurst Baptist member Walker Knight. “The decisions made during the changes would be important for a wide audience in the following years, especially important today, almost 50 years later, dramatically illustrated at Charlottesville, on football fields, and with the resurgence of the white supremacy movement.”

“The Turning Point” is a 23-minute film telling the story of how a thousand members left Oakhurst Baptist Church after the church integrated in the 1960s. The video is based on Knight’s book “The Struggle for Integrity,” published in 1969 by Word Inc. It is part of a series of videos the church is making to tell its history and share their message of the importance of integrity.

Wayne Grinstead is a member of Oakhurst and part of Third Avenue Films, which created the video. The filmmakers went through church archives and pictures to create the film, as well as conducted more than 200 hours of interview with present and former church members, Grinstead said.

“The whole idea of the film is that the struggle for integrity is not over,” Grinstead said. “It is a continuing struggle. We hope this will call to mind what happened 50 years ago and why it happened and cause people to reexamine their ideas and think about why we have some of the prejudices we do and whether they are really valid. How do you make sense of all that and try to have some integrity? What do we do when the next struggle for integrity comes up?”

“The Turning Point” documents a time of change not just for Oakhurst Baptist Church, but for the entire city of Atlanta. During the early 1960s, court-ordered school integration began in Atlanta. Various building projects such as a new stadium and civic center displaced thousands of African American families. Meanwhile, broader access to government loans allowed them to buy homes and move into previously white neighborhoods.

Many of them moved east, including the area around Oakhurst Baptist Church. At the time, the church had about 1,500 members and was just beginning a major building and expansion phase.

As the neighborhood around the church changed rapidly, the church did a study about what they should do. Some members thought they should sell their property and move to a new location. But others urged the church to embrace their new neighbors and to offer programs to welcome them.

The recently hired pastor at the time, Rev. John Nichol, supported integration. He refused to put the issue up for a vote, saying welcoming everyone in the community was not a choice for any church.

“The rejection of the black community would be tantamount to the rejection of Jesus Christ,” Nichol says in the film. “It was not bravery; it was our integrity that was at stake.”

The church began more than a dozen different programs, many of them focusing on offering activies to children in the neighborhood. The leaders organized vacation Bible school, reading clubs, swimming classes and skating parties. White people in the neighborhood invited their black neighbors to attend church with them.

Annie Harper was one of the African Americans who joined the church at the time and is still a member today. She shares her story in the film, saying she first heard about Oakhurst from a sign about vacation Bible school. She didn’t even know the congregation was predominately white.

“It didn’t faze me,” Harper says during her interview. “I’ve been there ever since.”

Many white members of the church left, and even ones that stayed struggled with the changes. After a newspaper article highlighted the changes, using the word “integrate” in the headlines, the church got even more pushback. But the people who stayed said they knew they were doing the right thing. Eventually, the congregation stabilized with around 500 members.

Grinstead said people were glad to talk about their experience during that time and share their memories for the film.

“The church took a stand and did the right thing,” he said. “People were touch by it; they were glad it happened and glad to have been a part of it. They have wonderful memories of the whole experience.”

Today, Oakhurst Baptist is once again going through changes in its neighborhood, as the area gentrifies. Members of the church such as Grinstead and Mark Reeves say it has been challenging to remain diverse, but they still remain welcoming and open to everyone. They support movements such as Black Lives Matter and welcome refugees in the area.

“That openness is still there,” Reeves said.

“A lot of us who went through the sixties thought we were beyond this,” Grinstead said, referring to events in the past year. “Well, apparently we are not. We hope in some small way, our story will contribute to the conversation that is going on in the country.”

The video is available for all to view free on the church’s web site, www.oakhurstbaptist.org and on Vimeo: https://vimeo.com/240240937.