Decatur Police are asking for  the public’s help identifying a man who allegedly robbed a Verizon store on Dec. 22.

Officers responded to the call at 8:38 p.m. Decatur Police said that on Friday evening, Dec. 22, a man posing as a customer walked into the store.

“Employees reported a man entered the store and asked if they had phones,” Lt. Jennifer Ross said. “The employees then heard the sound of a round of ammunition being chambered into a handgun and the suspect ordered the employees to the rear of the store and stated, ‘You know what this is.’ The suspect took an undetermined amount of cell phones and left through the front door and entered a red vehicle, possibly driven by a second suspect. The suspect was described as a black male, 20-30 years old, approximately 5’9”, slender build wearing a burgundy hooded sweatshirt, skull cap, wool gloves, boots and baggy pants and armed with a handgun. No employees were harmed.”

Here are the photos Ross released on Dec. 28: 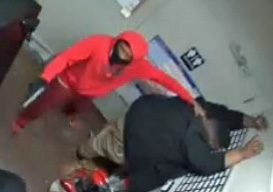 “If anyone recognizes this suspect or has any information about this case, please contact Inv. Hensel at [email protected] or 678/553-6687 or Crime Stoppers Greater Atlanta at  404/577-TIPS(8477) and remain anonymous,” Ross said.

It’s not clear if the incident is connected to one that happened earlier in the month. Armed robbers attempted to enter the store on Dec. 5.

“A Verizon employee reported he was taking out the trash when he was approached from behind by two unknown men who attempted to force their way into the store,” Lt. Jennifer Ross said of the Dec. 5 incident. “The employee was able to pull the door closed and lock the door.”

Police released photos of the suspect in that case as well. To see them, click here.

An armed robber also recently targeted the Parker’s on Ponce restaurant. Police said they do not think the Dec. 24 incident at the restaurant is connected to the Verizon store robberies, but haven’t ruled anything out. To learn more about that incident, click here.