Agnes Scott names director of U.S. Trade and Development Agency as its next president

Agnes Scott names director of U.S. Trade and Development Agency as its next president 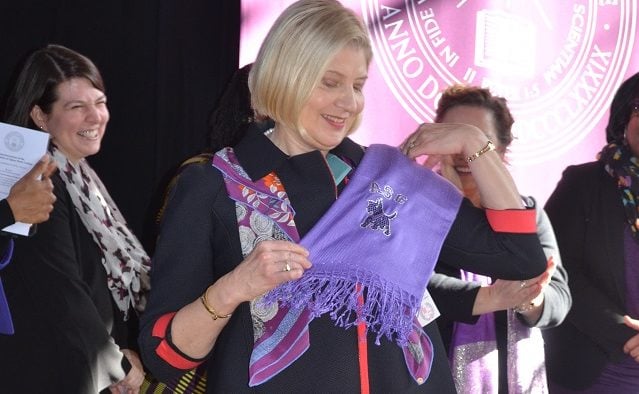 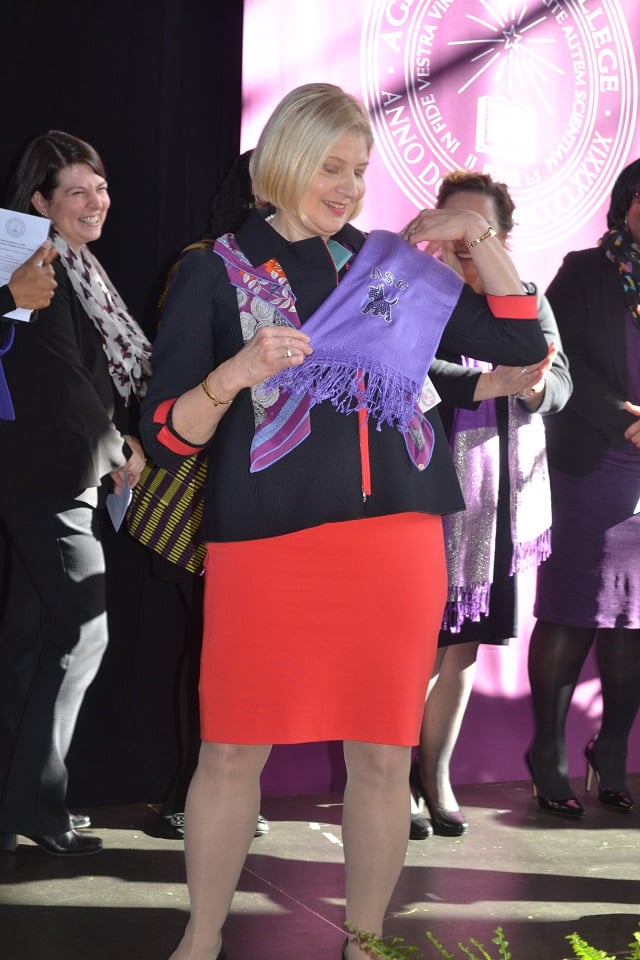 The Agnes Scott College Board of Trustees announced their selection of Leocadia (Lee) I. Zak as the college’s new president during media conference today. Zak will be the college’s ninth president when she officially assumes the role on July 1, 2018.

Zak succeeds Elizabeth Kiss who has served as President of Agnes Scott College since 2006.

“I love the traditions at Agnes Scott College,” Zak said. “Honor code, black hats but I really love the ringing of the bell.”

The bell is rung on campus to announce special accomplishments like grad school acceptance and first job acceptance.

“I want to ring that bell everyday,” Zak continued.

Zak was chosen after an eight-month search process.

“Lee Zak was chosen over an exceptional pool of candidates,” Board of Trustees Chair Elizabeth Holder said. “She stood out as an exceptional and accomplished leader.”

Zak is a Phi Beta Kappa graduate of Mount Holyoke College. She holds a J.D. degree from Northeastern University School of Law. She was appointed by President Barack Obama and confirmed by the U.S. Senate in 2010 to serve as the director of U.S. Trade and Development Agency, an independent federal agency that advances economic development in middle-income countries.

Before working with the government, Zak spent 18 years with the law firm of Mintz, Levin, Cohn, Ferris, Glovsky and Popeo PC where she handled international and domestic project finance. She became a partner with the law firm in 1990 and recently has taught International Project Finance as an adjunct faculty member at Georgetown University Law Center and Boston University School of Law.

Her husband, Kenneth Hansen, is a partner with the international law firm of Norton Rose Fulbright in Washington D.C. He will continue practicing law as they move to the Atlanta area this summer.

Zac said she is excited about the Atlanta community, especially its arts and sports scenes. She is impressed with the area and its strength in business.

“I can reach successful women, share the Agnes Scott story and women in Atlanta can share their story with our students,” she explained.

Zak is poised to focus on leadership and global learning for women at Agnes Scott College through their SUMMIT program. “I look forward to honoring Agnes Scott College’s distinguished history and traditions and working together to build on its outstanding achievements.”

The Agnes Scott College Board of Trustees has announced the selection of Leocadia “Lee”  I. Zak as the college’s ninth president in its 129-year history. Zak will assume the role officially on July 1, 2018. She is succeeding current Agnes Scott President Elizabeth Kiss, who is stepping down at the end of June.

Zak’s appointment concludes an eight-month presidential search for a bold and inspiring leader with a commitment to institutional excellence who will build upon the success of SUMMIT, Agnes Scott’s distinctive signature experience focused on global learning and leadership development. With her broad experience in the international arena, proven leadership and management abilities, and history of being an influential change agent, Zak is well suited to advancing the college’s mission of educating students to become global leaders.

“The Presidential Search Committee vetted a number of highly impressive candidates, and the selection process was rigorous. Lee Zak stood out as an exceptional and accomplished leader, and the Board of Trustees unanimously concluded that she is the right choice at this stage in Agnes Scott’s transformational journey. We feel she is well positioned to continue the momentum of SUMMIT and to contribute greatly to our growth as a premier liberal arts institution,” said Elizabeth Daniel Holder ’82, chair of the college’s Board of Trustees. “She will be stepping into the role armed with a solid foundation already built by President Kiss, and there is an immense opportunity for her to make her own mark. We are confident that she will.”

“I am extremely excited and honored to be joining Agnes Scott College. Now more than ever there is a need for women’s colleges, and SUMMIT uniquely takes the experience to a new level with its focus on leadership and global learning. President Kiss, the faculty, staff and the Board of Trustees should be commended for their vision. I look forward to honoring Agnes Scott College’s distinguished history and traditions and working together to build on its outstanding achievements,” said Zak.

Zak is a Phi Beta Kappa graduate of Mount Holyoke College, which recognized her as a Woman of Influence in 2012. She also holds a J.D. degree from Northeastern University School of Law.

Zak comes to Agnes Scott with extensive background in international economic development and international project finance. Appointed by President Barack Obama and confirmed by the U.S. Senate in March 2010, Zak served for seven years as the director of the U.S. Trade and Development Agency, an independent federal agency that advances economic development and U.S. commercial interests in developing and middle-income countries. She first joined the agency in 2000, and, prior to her appointment as director, she served as general counsel, deputy director and acting director.

Her achievements at the U.S. Trade and Development Agency include leading the Aviation Cooperation Programs in China, India and Brazil; the Energy Cooperation Programs in China and India; and the development of the worldwide Global Procurement Initiative and the India Smart Cities Initiative. She has testified before Congress on behalf of the agency’s programs, accompanied the president on foreign trips and met with heads of state and other senior government officials and business leaders around the world.

While in government service, she also was involved in the establishment of what has become the Women in Public Service Project, a global program working to improve the representation of women in policy and public leadership positions housed at the Woodrow Wilson International Center for Scholars.

Before joining the public sector, Zak spent 18 years at the Boston and Washington, D.C., offices of the law firm Mintz, Levin, Cohn, Ferris, Glovsky, and Popeo PC, which she joined as an associate in 1982. At the firm, she practiced in the areas of international and domestic project finance, becoming a partner in 1990.

More recently, Zak has taught International Project Finance as an adjunct faculty member at the Georgetown University Law Center and the Boston University School of Law, including team-teaching with her husband, Kenneth Hansen, a partner in the Washington, D.C., office of the international law firm of Norton Rose Fulbright.