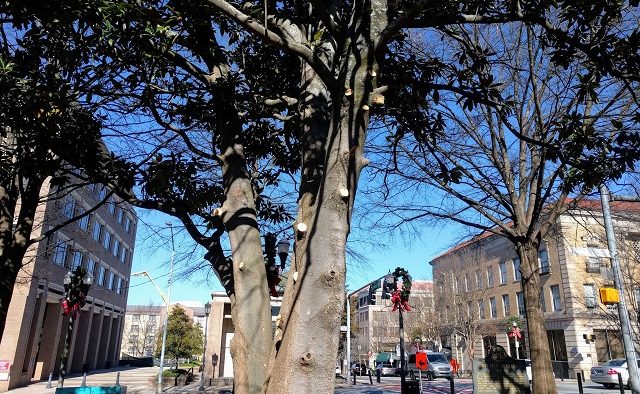 A damaged three at the DeKalb County Courthouse. Photo by Dan Whisenhunt
Share

The contractor who recently hacked limbs off magnolia and holly trees surrounding the historic courthouse on the Decatur Square has promised to correct his mistakes.

Records obtained by Decaturish identify the contractor as 3 Macks Lawn Service. The county says the contractor is also responsible for a number of other projects. To see the full list, click here.

A county spokesperson said 3 Macks is being paid $30,000 a month. According to records provided by the county, the company first received the contract in 2015 and it has been extended twice.

The owner, Dwayne Fisher, admitted that his employees had botched the job.

“On some of the pruning, some of my guys made a couple of mistakes that we’re going to go ahead and correct,” he said, adding, “The mistakes are easily going to be corrected and taken care of.”

Fisher said he was not on site when the work occurred.

The company did not consult with the city prior to performing the work. Fisher said he’s addressed that, too.

Fisher said the county had initially asked the company to “improve the site, give it a more open look and make some corrections.”

The company did this by sawing limbs off of nearly every tree at the old courthouse, some all the way to the trunk. The limb of one tree lining Ponce de Leon Avenue looked like it had snapped off at some point during the work.

The work angered local arborist Susan Avent who has been raising a ruckus about it. The work occurred on Christmas Eve weekend. She called it a “hack job.”

Fisher said it won’t look that way for long.

“You’ll see all the corrections made within the next two weeks on the site and you’ll see a better looking courthouse,” he said.