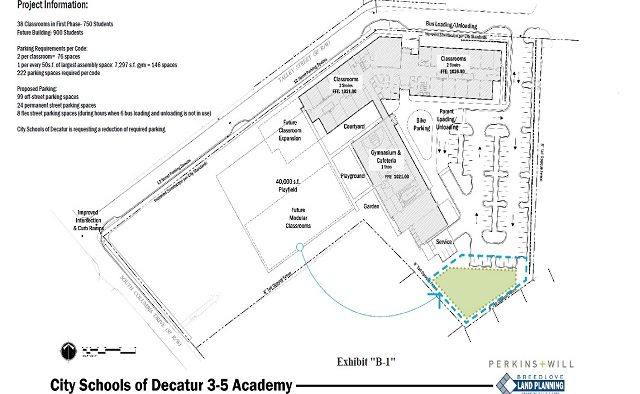 Decatur’s City Commission on Tuesday signed off on zoning and a change in land use for property City Schools of Decatur owns on Talley Street.

In the process, parents advocating for increased play space at the site got some concessions from the school district.

CSD will soon begin work on a new 3-5 school at Talley Street which is expected to be finished by the start of the 2019 school year. The new school will cost $22.5 million and seat 750 students in the first phase. It will have a bike parking space and a garden space. It will include 40,000 square feet of play field space, something that had been a point of contention because a prior site plan showed it would be a location for modular classrooms if they’re ever needed. CSD altered those plans and put the site of future modular classrooms by the parking lot.

“They got a lot of things they wanted,” CSD Chief Operating Officer Noel Maloof said of the parents who have been nudging school officials about plans for the site. He noted that the play field space has increased 47 percent from the original proposal. He said required parking spaces were also reduced from 233 spaces to 99 off street parking spaces. The site also has street parking. He said the original plan included parking for 30 buses. That was removed from the final version. 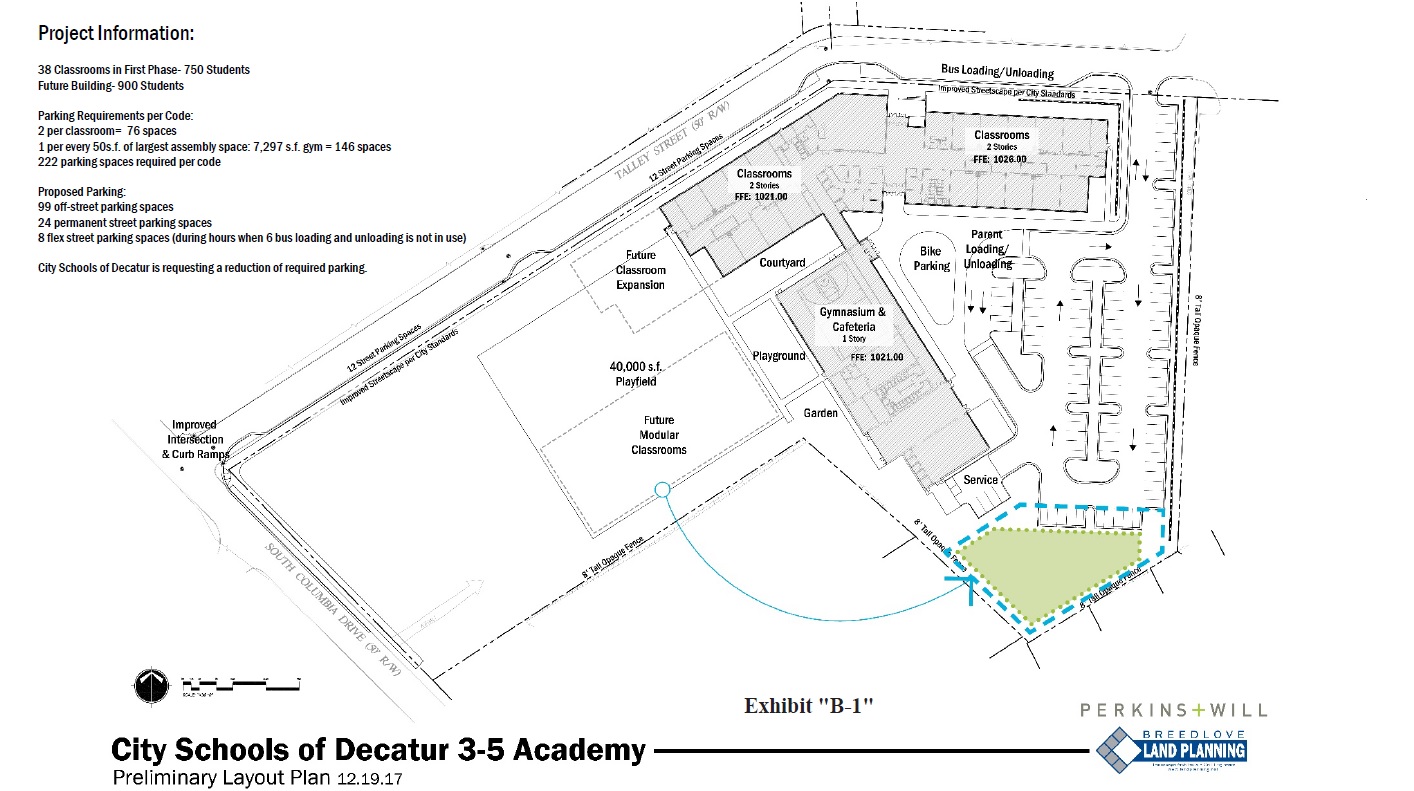 Maloof said the site for the modulars will not conflict with a proposed “tree save area” shown on CSD’s tree protection and replacement plan: 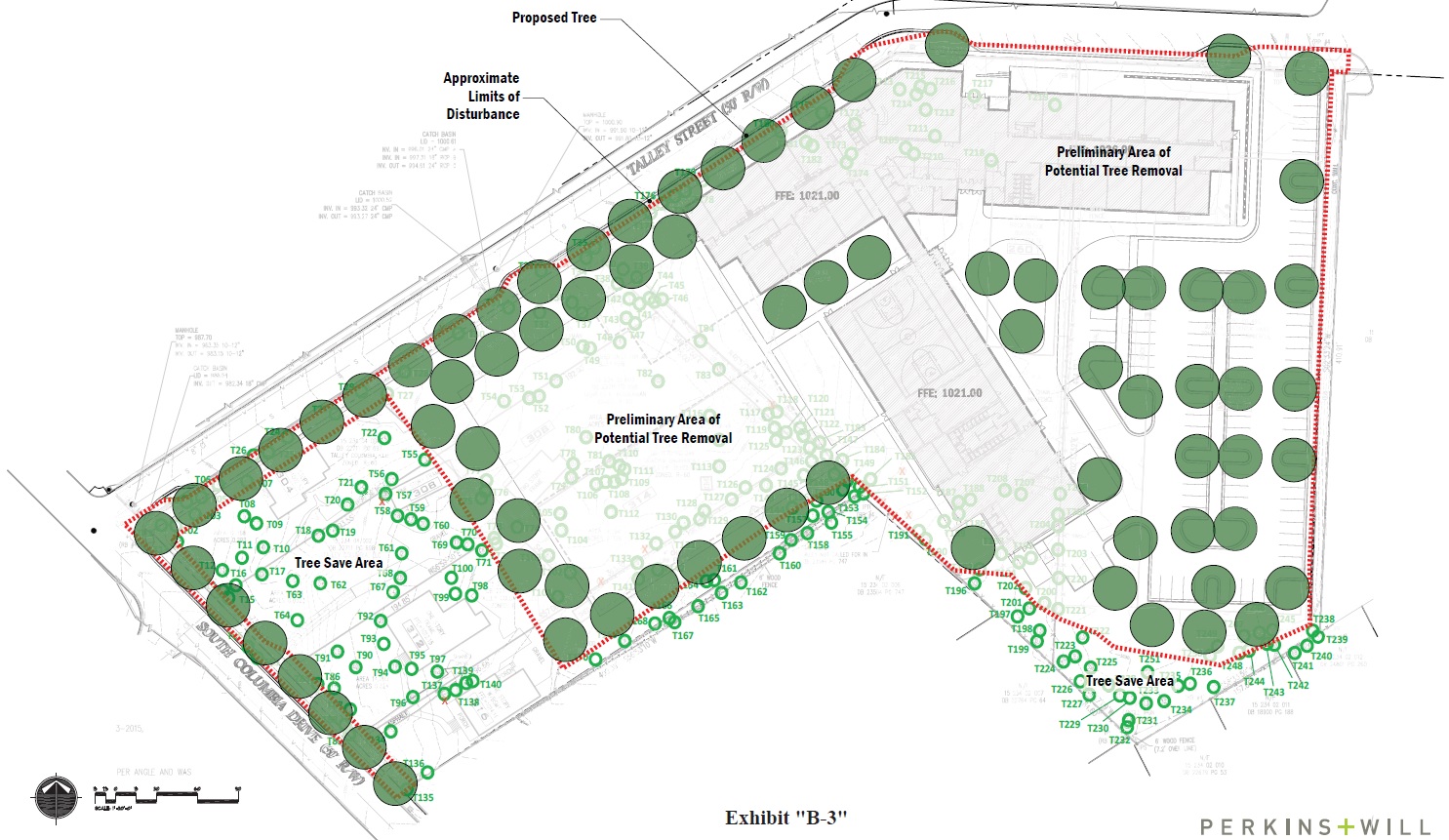 “The modulars, if needed, will not affect the tree buffer in that area,” he said.

Kate Gardes, one of the parents who signed a letter published on Decaturish advocating for more play space, was happy with some of the changes. She was glad the location for future modular spaces was moved, but she thinks the site has too many parking spaces, saying 75 would be enough to accommodate all faculty and staff.

“I’m disappointed CSD is still committed to overbuilding the parking lot at this time, especially in light of the 32 additional spaces directly in front of the school,” she said. Twenty four of those spaces will be on street parking and eight spaces will be “flex spaces,” to be used when buses aren’t loading and unloading, according to the site plan.

Superintendent David Dude, who spoke at Tuesday’s City Commission meeting, said school officials are hopeful that the new school can meet the school system’s needs without having to add portable classrooms.

“We are very much hoping we don’t have to put modular classrooms at that school,” Dude told the commission.

Editor’s note: Decaturish reported some of this story by watching a live stream of the Jan. 16 City Commission meeting.