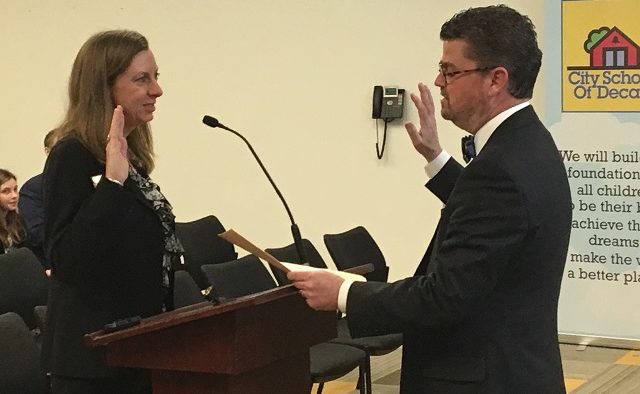 Heather Tell is sworn in as a Decatur School Board member during the board's Jan. 23 meeting. Photo by Gabriel Owens
Share 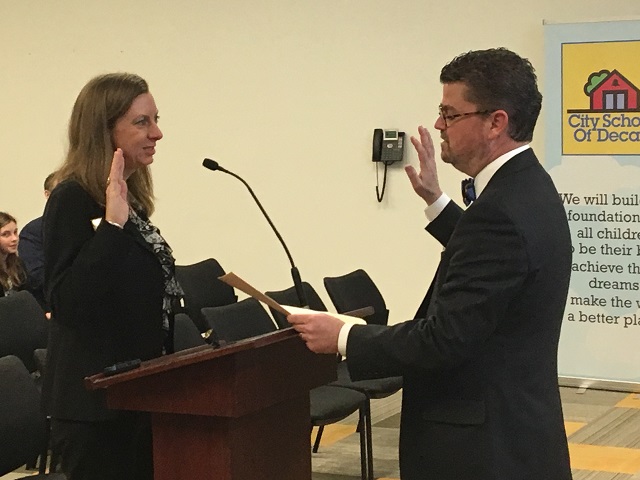 Heather Tell is sworn in as a Decatur School Board member during the board’s Jan. 23 meeting. Photo by Gabriel Owens

The School Board held its first regular meeting of the year on Jan. 23, formally swearing in a new board member and electing a new board chair.

Board members also approved a plan for making up school days missed due to last week’s winter weather.

Heather Tell was sworn in. She replaces Bernadette Seals, who decided not to run for reelection last year. The board elected Lewis Jones as its new board chair, replacing board member Annie Caiola and Tasha White as the board’s vice chair, who replaces board member Garrett Goebel.

After a heated round of debate and discussion, the School Board voted 5-to-1 in favor of having one added school day, March 12, to help make up for the six that CSD has (so far) missed due this academic year to weather conditions.

March 12 was previously set aside for a school administrative day. Another option considered included two additional days, February 22 and 23, which would have cut into the school system’s planned winter break. A third option was to not make up any of the days, as the days missed for Hurricane Irma in September are because it was a state emergency.

“I am confident from my conversations with the school administrators and teachers that the [curriculum] will not be effected by the missing days,” CSD Superintendent David Dude said. He also noted families and teachers have already made vacation plans for those winter break in February.

The entire board was not in agreement. Caiola voted and argued against the March 12 only option, saying that certain school vacation days are built in to be used for such times, and that six days is a lot of school to miss.

“Our end purpose is to ensure the best education,” she said.

Tell agreed with Caiola, but ended up voting with the majority in one of her first acts as a CSD Board member.

Other highlights of the meeting include:

– In the spotlight section, Decatur High was recognized for achieving the rare Single Statewide Accountability System Award of “Gold/Gold,” achieved for some of the highest academic gains and performance percentages in the state. Decatur High was ranked the fifth best SSAS performing school in Georgia, according to the school administration. Buford High ranked No. 1.

– The board continued its ongoing discussion about racial inequality in the school system and talked about ways to address it. Board members noted the lack of diversity among teachers at Decatur High. Only 13 percent teachers at the high school are black.

The CSD Board’s next meeting is February 13.