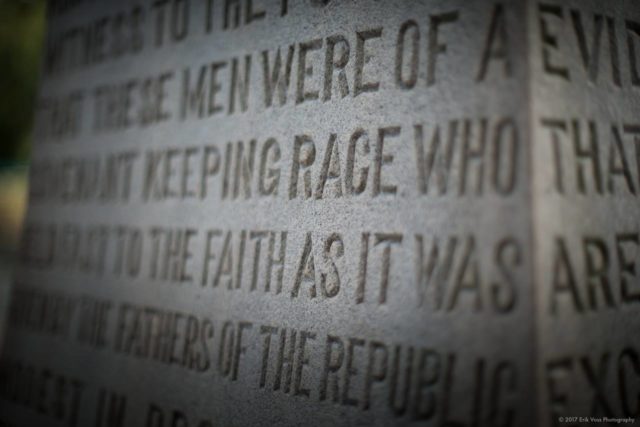 The DeKalb County Commission on Tuesday approved a resolution to remove Decatur’s Confederate monument and relocate it elsewhere.

Activists have been working for months to get elected officials to take action on it. Johnson acknowledged that it has been a long process.

Commissioner Nancy Jester was the only “no” vote.

People advocating for the monument’s removal cheered when the resolution was approved.

State law currently prohibits the removal of these monuments, but the county’s attorney believes it can be moved as long as it isn’t obscured. According to the resolution, the county will accept proposals for relocation of the monument. The resolution also asks the state Legislature to repeal this law.

Activists demanded the monument’s removal after a white supremacist rally in Charlottesville, Va. held in August resulted in the deaths of three people. Opponents of the monument held a rally and a discussion in the city’s downtown to support removing it. The monument has also been defaced several times since the debate began.

The monument is located by the old DeKalb County courthouse and was constructed in 1908. It is widely seen as a symbol of the Jim Crow era South.

“Today you have an opportunity to vote for a plan that relocates the monument in a measured, intentional way,” she said. “We fully support this resolution as a part towards rectifying a great wrong perpetrated upon black residents of DeKalb County over 100 years ago. This is a chance to tell a fuller and factual history not only of the Civil War but of our Jim Crow past in Georgia.”

Hannah Hill also spoke in favor of the removal, saying that members of her family owned slave and advocated for Jim Crow and she was ashamed.

“The monument that stands does not represent something that I am proud of,” she said. “I understand that it is hurtful.”

“We ask that you move forward with the removal,” Davis said. “We believe it is the right thing to do and we believe the time is now.”

Chris Billingsley, a retired Decatur High teacher, was the only person to speak against the removal during public comments.

“I believe it is morally wrong to remove a monument that is dedicated to DeKalb veterans,” he said. “I believe it is a violation of state law to store the monument in a warehouse even if only for a brief time. For those of you Christians with hatred in your hearts for Confederate veterans, I ask you to forgive them. Our faith demands this.”

Editor’s note: This story was reported by viewing a live video stream of the Jan. 23 County Commission meeting.