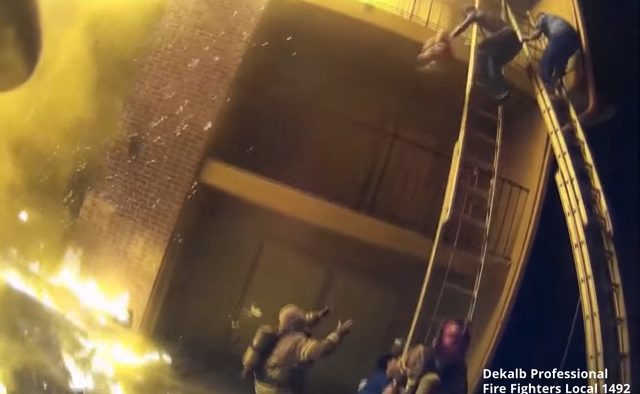 Dramatic video has surfaced showing the harrowing moments when a DeKalb County firefighter caught a baby dropped from a third floor balcony during an apartment fire.

The fire occurred on Jan. 3 at apartments located on Pine Tree Circle. According to the Fire Department, firefighters were catching babies and children as they were dropped from the higher floors of the complex.

A video shows Capt. Scott Stroup catching the child during the blaze.

Another firefighter, Capt. Jackie Peckrul, also caught a child, according to CBS Atlanta. Peckrul is a mother to triplets, CBS reported.

“I don’t really feel like a hero. I don’t think any of us do. It’s our job and we are so fortunate to work for DeKalb County who prides training and equipment and we have a brotherhood here and we work really well together,” Peckrul told CBS. “I couldn’t be anything else and it makes me a better mom and being a mom probably makes me a better firefighter.”

The fire displaced several Avondale Elementary students and the community has been collecting supplies and money to help these families.