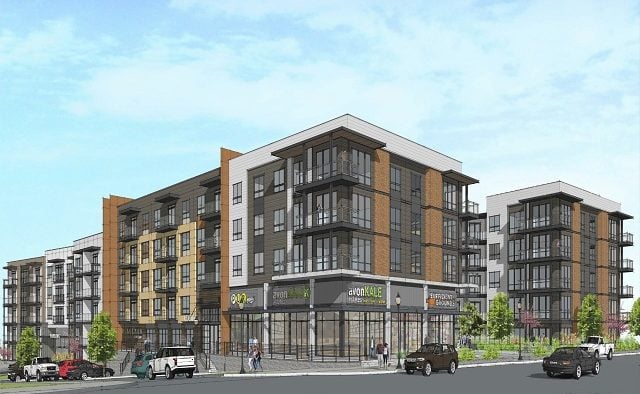 Trammell Crow Residential appeared before Avondale Estates’ Architectural Review Board on Monday and offered the first renderings of a planned 290 unit apartment project.

The project is called Alexan Gateway.

The renderings presented at the meeting are likely to be revised, Architectural Review Board Chair David Sacks said.

“It was a preliminary discussion, so there was no formal action requested or taken,” Sacks said. “I think what they’re going to do next [is] get with [the] design team and look at making some revisions based on the feedback that [they] got and they will be back potentially for another discussion item next month prior to submitting for an actual certificate of appropriateness.”

The project is bordered by College Avenue, Maple Street, Hillyer Avenue and the CSX train tracks. The developer is proposing 5,000 square feet of retail, in addition to residences.

Here’s one of the renderings shown to the board at Monday’s meeting:

To see the complete set of renderings and plans for the project, click here.

Sacks said during the meeting residents raised several concerns about the project.

They asked the developer to lower the height of the building from five stories on College Avenue.

“I think our existing city zoning ordinance and downtown master plan all envision kind of a moderate scale along the roadway corridor and larger scale taller buildings closer to the railroad,” Sacks said.

The density of the project was another concern, he said. They said the development didn’t mesh with the rest of the city.

“I think there were several people who felt like it didn’t particularly look like Avondale or seem to fit in Avondale,” Sacks said. “‘It could be anywhere,’ was one comment.”

Residents gave the developer positive feedback on the streetscape plans and a proposed courtyard space. There was also a request to improve the street network surrounding the property.

“A couple of people brought up the desire to see a kind of a more complete street network and walkability connecting downtown to the MARTA station,” he said. “So basically they just pointed that out as something for the developers to be thinking about either in the streetscape treatment along the front or making some connection between Maple and Hillyer streets.”