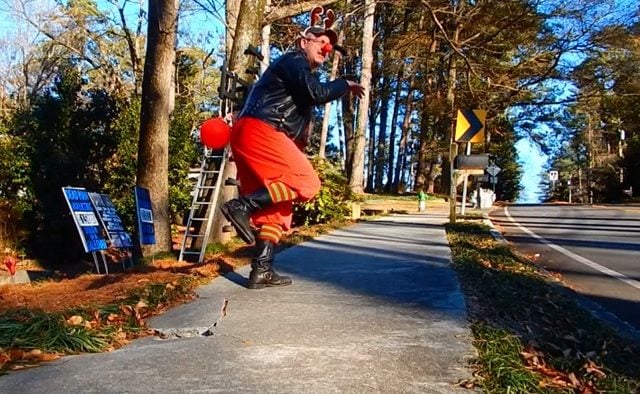 For years, Jim Ed Avery has decorated his yard on Mason Mill Road with vulgar signs and ranted and raved at cars passing by.

For years, his neighbors have been begging the county to intervene.

They made some headway when they were able convince officials to charge him under DeKalb County laws that specify the number of signs a person can have in their yard, CBS Atlanta reported January of 2017.

After a trial over the violations last year, Avery was ordered to pay $10,000 in fines and received five years probation. He spent a week in jail, CBS Atlanta reported.

But Avery did not stop, according to a YouTube channel that contains videos of his antics.

During a hearing on Feb. 12, Avery was found to have violated the terms of his probation and sentenced to 30 days in jail, according to the Mason Mill Civic Association.

“The violations occurred specifically on September 9, 2017 and November 1, 2017, when Code Enforcement officers found that the signage he had in his front yard exceeded the square footage allowed by the code,” the Civic Association reported. “When released from jail, Mr. Avery will be subject to drug testing every two weeks and visits from his parole officer.  Also, code enforcement officers will be expected to view his property on a regular basis.  Should he be found to be in violation of his probation again, a warrant for his arrest can be applied for immediately.”

He will also be responsible for hiring his own lawyer after the Public Defenders Office was released from representing him.

The consequences could be even worse if Avery continues to violate the conditions of his probation.

“Judge McCoyd stated that in his original order he had tried to establish clear parameters and consequences that were fair to both Mr. Avery and the County,” the Civic Association’s email says. “However, it was clear that Mr. Avery had not taken the court proceedings seriously and that his display of excess signage signified his lack of concern about county ordinances and his defiance in complying with those ordinances.

“The Judge was not willing at this time to consider Mr. Avery in violation of his parole due to his creating a ‘hazardous and offensive condition in our community.’ However, the Judge did seem to indicate that he might consider this argument in the future should Mr. Avery return to court.”

“Several residents stayed until the bitter end,” the Civic Association reported. “We were frustrated with the judgment, but were told by the lawyers present that a 30-day jail sentence is a very hefty sentence for what began as essentially a code violation matter, and that the penalties will increase should Mr. Avery continue to violate his parole conditions.”

Here’s a video of Avery doing his usual routine: