Two proposed new cities appear to be gaining traction with the state Legislature.

The proposed cities of Greenhaven and Vista Grove are being considered.

A proposed city of Greenhaven, a large south DeKalb City that has been in the works since 2014, has a bill filed in the House by state Rep. Billy Mitchell, D-Stone Mountain. The population of the city would be about 300,000 people. That would make it the second-largest city in Georgia behind Atlanta.

Here’s a map of the proposed city:

A map of the proposed city of Greenhaven. Photo obtained via http://www.greenhaven-ga.org/new-page/

Greenhaven advocates say that bigger is better when it comes to providing services.

“Small cities in southern DeKalb find it hard to be sustainable,” the Imagine Greenhaven website says. “They have significantly higher millage/tax rates than their northern counterparts in order to provide services.”

A feasibility study, which determines if the city can raise enough revenue to provide services, for the city estimates Greenhaven could operate with a $27 million surplus. The city would take over economic development functions, courts and parks. There are not any current plans for the city to provide police services, though the website indicates that could change at some point.

If the bill for Greenhaven passes the Legislature this year, it would be voted on in a November referendum.

The idea has opposition. A Facebook group called Neighbors Against Greenhaven has been circulating a petition in opposition to the bill to incorporate.

“Greenhaven’s current feasibly study was developed in 2015 and has not been updated despite the fact that numerous areas within the proposed boundaries have annexed into neighboring cities to avoid becoming part of Greenhaven,” the petition says. “Given the outdated and (as a result of annexations) inaccurate feasibility study, Greenhaven cannot currently prove that they are fiscally viable and thus have not met the basic requirements for moving forward in the cityhood process.”

Greenhaven has also picked up some supporters this year. The South DeKalb Improvement Association recently endorsed the idea.

In a press release President Kenneth Saunders III said, “SDIA believes that change is needed in southern DeKalb County and forming a city is a means of getting dedicated governance to our area, more focus on economic development, and an opportunity to direct resources to needed development and infrastructure in the southern portion of the county.”

Kathryn Rice, who has also been heavily involved with the Greenhaven cityhood movement, is the founder of SDIA, according to the SDIA website.

The DeKalb NAACP has not endorsed the idea of Greenhaven, but believes the issue should be put before voters. The group recently criticized the County Commission’s decision to ask for a moratorium on new cities and annexations.

A recent legal notice in the “The Champion” newspaper said that a bill on behalf of Vista Grove will be introduced. Decaturish was unable to find a copy of the legislation. 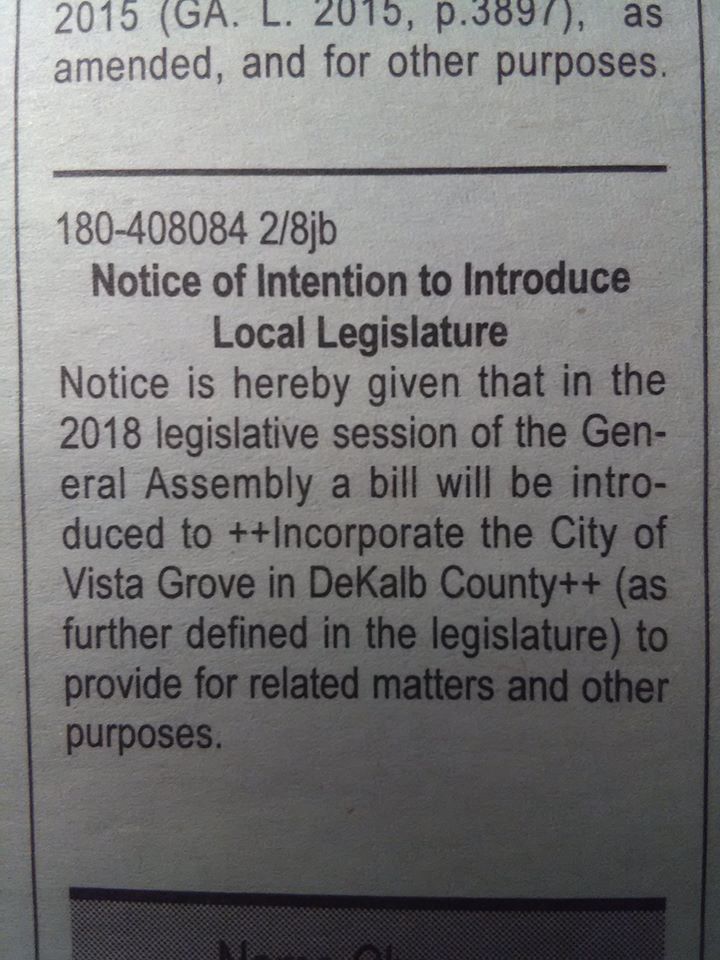 According to “The Champion” legal department, the ad was purchased by attorney John Ayoub, a member of the Vista Grove Initiative. He told Decaturish via email that the bill will be introduced by state Rep. Tom Taylor, R-Dunwoody.

The new city would include Lakeside High, Briarlake Elementary, Sagamore Elementary and Oak Grove Elementary, though these schools would still be a part of the DeKalb County School system. It would also contain Northlake Mall, a potentially lucrative source of tax revenue. 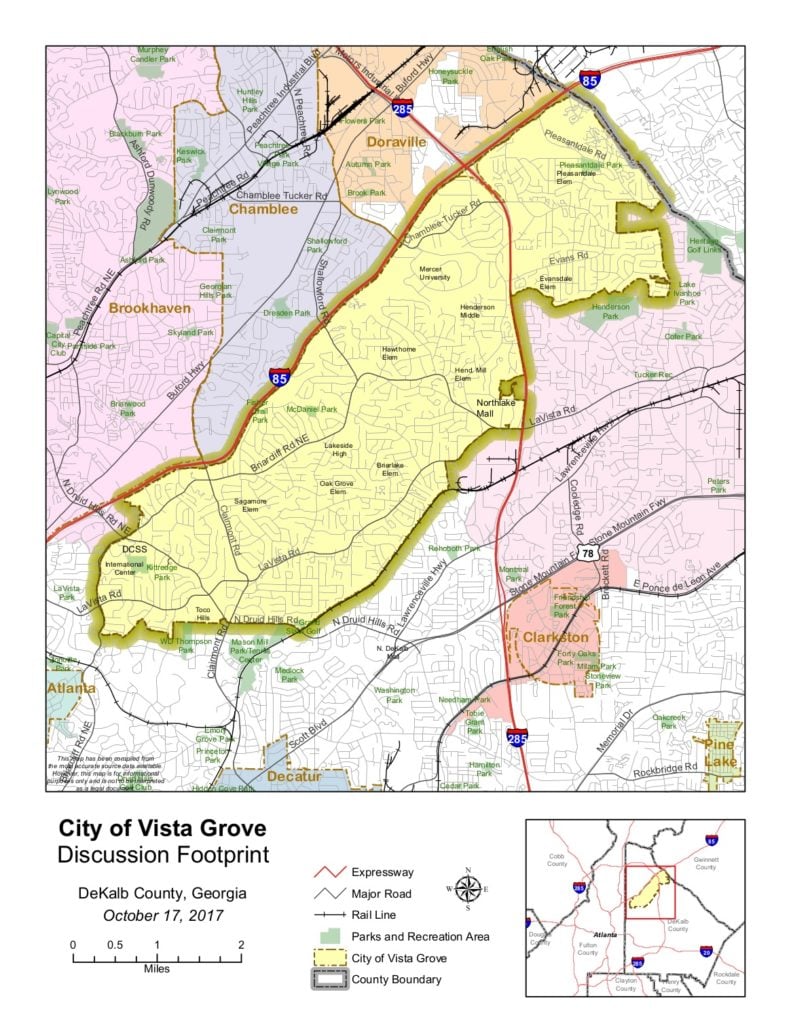 Andrew Flake, a founding member of the Vista Grove Initiative, said in a blog post on Feb. 5 that the group expects to have a completed feasibility study soon.

“Based on what we know about the strong tax base in our region, we anticipate that the analysis will confirm that a City of Vista Grove is not only feasible but economically strong and able to support a range of services,” Flake wrote. “We want our local legislators to know that, and to support and co-sponsor the bill.”

“With a bill introduced this year, the legislature’s rules pertaining to city creation provide for a default two-year process,” he wrote. “That would mean that a vote by the citizens of Vista Grove would occur in 2019.”

That group also has opposition, primarily from members of DeKalb Strong.

The group was vehemently opposed to the proposed city of LaVista Hills and Tucker, the latter of which successfully incorporated.

Marjorie Snook with DeKalb Strong said the group is generally opposed to any cityhood bill.

“We have made it clear in the past that we are not in support of any cityhood initiatives that don’t account for the whole county, this piecemeal carving up cities here and there without any concerted plan for the county,” Snook said. “None of those cityhood ideas are good ideas.”

She said the group hasn’t issued any formal statements about Vista Grove and said the idea for that city is still taking shape.

“This specific proposal, they haven’t said whether they’re taking on police [services] yet,” Snook said. “Their proposal isn’t even fully cooked yet. They don’t have a feasibility study. We think it’s kind of a rush to be pushing for a bill when you don’t have your mix of services finalized yet.”