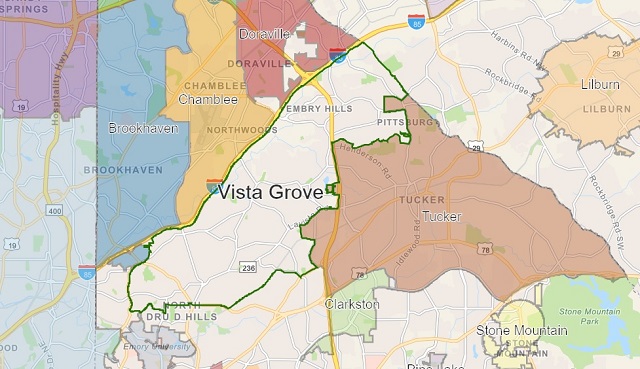 To see an interactive version of this map, click here.

A group looking to create a new city in DeKalb County cleared another hurdle this week.

The Vista Grove Initiative released a financial feasibility study conducted by the Carl Vinson Institute of Government at the University of Georgia. The study showed the proposed city would receive $10 million more in revenue than it would spend providing services, a figure that includes police services. Other services would include planning, zoning, parks and road maintenance.

The group said state Rep. Tom Taylor, R-Dunwoody, has introduced a bill on their behalf. The bill calls for a referendum on cityhood in 2019. To read it, click here.

“If we’re going to meet the challenges of tomorrow in our North DeKalb community, we need the ability to innovate, to plan locally and long-term, and to implement those plans,” Andrew Flake, one of Vista Grove Initiative’s founding members, said in a press release. “Safe intersections, beautiful and walkable streets, and a vibrant mix of businesses do not happen by accident. We believe a city would give our community the ability to create a smart, comprehensive plan and organize the citizen energy and local resources to support it.”

The proposed city, which would have a population of about 63,000 people according to the study, would include Lakeside High, Briarlake Elementary, Sagamore Elementary and Oak Grove Elementary, though these schools would still be a part of the DeKalb County School system. It would also contain Northlake Mall, a potentially lucrative source of tax revenue.

The city’s anticipated expenses are $32 million a year, which includes $8.7 million for police services. The police department would have about 80 officers.

The Vista Grove Initiative will hold another public meeting on Feb. 26 at 7 p.m. at the Leafmore-Creek Park Club, located at 1373 Altamont Dr., Decatur, Georgia

Here is the full study released by Vista Grove.