Representatives from Thomas P. Miller and Associates gave the School Board an update about its ongoing Educational Equity Assessment. A preliminary report is expected in April. Photo by Gabriel Owens
Share 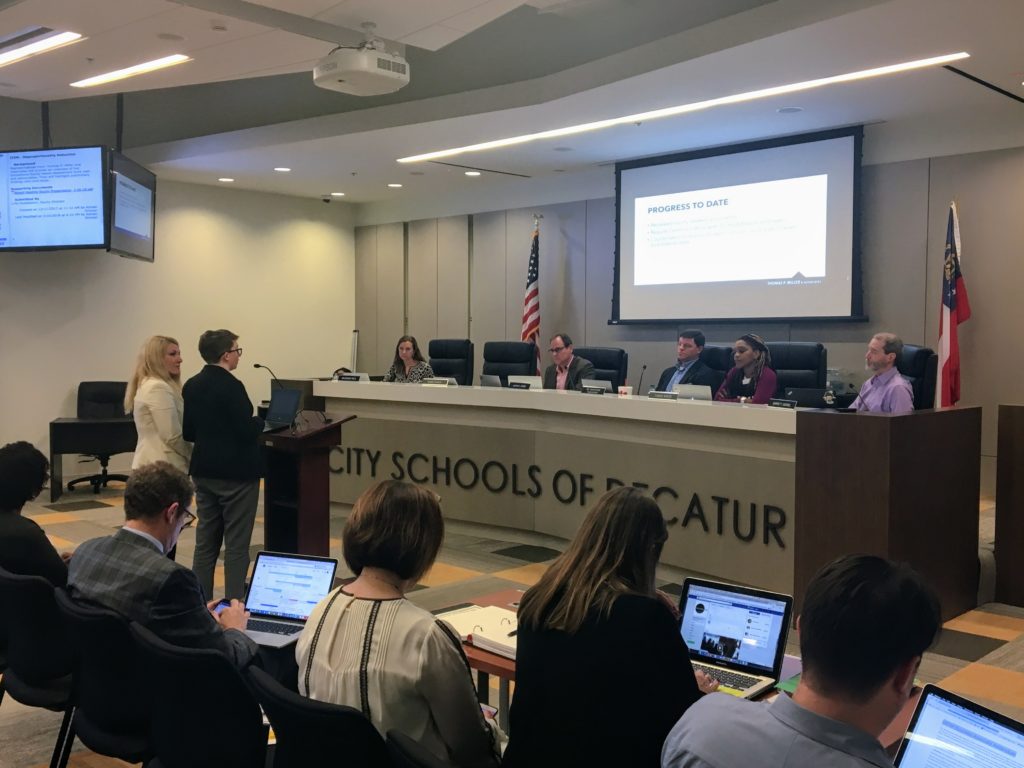 Representatives from Thomas P. Miller and Associates gave the School Board an update about its ongoing Educational Equity Assessment. A preliminary report is expected in April. Photo by Gabriel Owens

With an overloaded agenda and a missing board member, the Decatur School Board on Tuesday chose delay deciding how to make up a recently missed school day.

A water main broke on Buford Highway March 7, forcing most schools in Dekalb and east Atlanta to shut down. City Schools of Decatur was already “in the hole” for allotted missed school days due to snow earlier this year and a hurricane last year.

“Some of our options include [extra time during the week] or coming in on a Saturday,” said David Dude, CSD Superintendent.  “Another is tacking on an additional day to the end of the school year.”

Dude expressed doubts that a Saturday school day or one more day of school after Memorial Day would be productive.  He was more open to a week of added school time but had concerns about it adding stress to the schools, teachers, and parents.

Dude suggested that the district simply eat the loss. While he and the other board members said they were not in favor of lost school time, “the practicality of implementing a makeup day” was a diminishing gains gambit.

But the decision was “tabled” until April, mostly due to board member Annie Caiola being out of town during the March 20 meeting.

“Annie was the most vocal about making up missed school time last month,” Dude said.  “This decision should be made with her input.”

A related topic on the agenda was adjustments to the 2018-2019 school calendar, specifically to include two teacher work days as possible make up days, as well as two other days built into the school year. This amendment to the calendar was passed.

Other items from the meeting included:

– Equity Director Lillie Huddleston and representatives from Thomas P. Miller and Associates gave an overview of the ongoing Educational Equity Needs Assessment to address disparities in the school system. The report’s preliminary findings will be available in April with a final report expected in May.

– Some of the highlights from public comment included a complaint about the school system’s “participation” in the recent walk out protest, concerns about the high turnover rate of teachers and principals, and a plea to Renfroe Middle School’s cafeteria to recycle materials.

The next school board meeting will be in April. The board will likely call a special work session before that meeting to tackle some of the issues that weren’t addressed on March 20.