School will grind to a halt for many students in the Atlanta area at 10 a.m. tomorrow, March 14.

At that time, students are planning to walk out of their schools for 17 minutes to honor 17 people who died in a Feb. 14 school shooting in Parkland, Fla.

Students at Decatur High and Renfroe Middle are planning to participate, and they will be joined by students in DeKalb County Schools, Atlanta Public schools and beyond.

Adults who are not school staff will not be allowed on campus, a City Schools of Decatur spokesperson said.

An email from the Renfroe Principal Greg Wiseman to parents says, “On March 14th, as always, students will be expected to follow our normal instructional schedule.  In the interest of our students’ safety, Decatur Police and staff who are not in classrooms teaching will be stationed strategically during the time for the planned walkout. Classroom teachers will take attendance as usual at the beginning of class and will also monitor attendance during the period and take attendance again at the end of class. We will not have other planned activities during instructional time on March 14th.”

Decatur Superintendent David Dude has said that students who walk out will technically be in violation of the school’s code of conduct and could face suspension. He indicated that school administrators will have some flexibility on what punishment, if any, students might receive. Dude said he supports the rights of students to protest.  Atlanta Public Schools and DeKab County Schools have largely embraced the protests.

DeKalb County Schools Superintendent Stephen Green said the school district will not try to stop students from walking out of class to protest gun violence. This applies to elementary and middle school students who want to participate, as well as high school students. Teachers who walk out will not be penalized.

All 1,300 students at Druid Hills High are planning to walk out, according to an email sent by the protest organizers.

“To support student engagement around a national dialogue on National School Walkout Day, our schools will work with our students on these issues and work with student leaders to develop a structured plan that will be implemented during that 17-minute time frame,” she wrote on her blog. “Some schools are already getting prepared for the learning experience!”

Organizers have asked churches to ring their bells during the event and many churches have indicated they will participate, according to the organizers. There will be a rally at the state Capitol at noon. 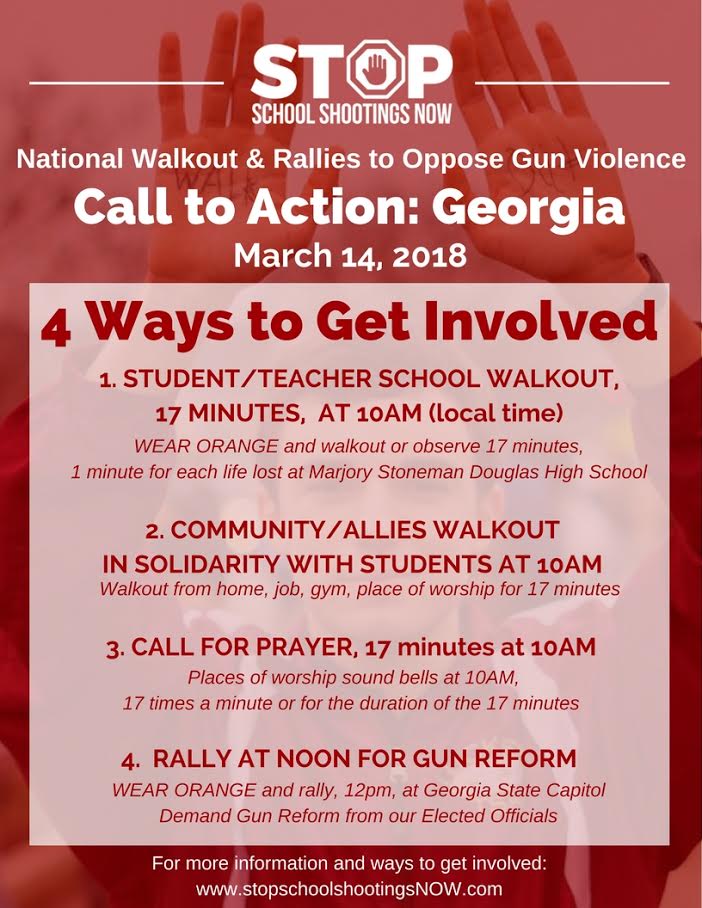 There will be a walkout/observation of 17 minutes on the square in Decatur, GA at 10am on March 14th. We expect a large turnout. Church bells will be ringing in Decatur throughout the 17 minutes.

Druid Hills High School will see their entire student body walkout (all 1300 students) with complete support from their administration. In fact, the whole school day will be committed to gun-related issues (2nd amendment, gun laws in Georgia, activism, reform and even voter registration opportunities for Seniors).

Then at 12pm there will be a rally at the Georgia State Capitol in Liberty Plaza.
We’ll go INTO the capitol to talk with legislators. Details below.

Media Advisory March 12, 2018, Atlanta, Georgia — Stop School Shootings NOW in coordination with the Women’s March Youth Empower movement is organizing a national walkout from schools and communities at 10am local time on March 14 for 17 minutes, one minute for every life lost in the Parkland, Florida high school shooting.

We have more than 2500 school walkouts scheduled across the country.  Walkouts will occur in EVERY state.  See this link at www.womensmarch.com/enough to have the latest update on SCHOOL walkouts planned across America.

Stop School Shootings NOW  is also planning COMMUNITY WALKOUTS in every state at 10am. Americans opposed to gun violence are asked to wear orange and walkout of their homes, jobs, places of worship, etc at 10am local time to stand in solidarity with students.

There will be NOON RALLIES on March 14 at state capitols, city halls and town squares to demand gun reform from our elected officials.

Here are 4 ways you can be involved on March 14th.

We’re calling for students, teachers and administrators to walk out or observe 17 minutes (1 minute  for each life lost at Marjory Stoneman Douglas High School in Parkland, Florida). March 14 is the one month anniversary of the shooting in Florida, and we ask all those who are opposed to gun violence and want reform to wear orange, walk out of their schools or observe 17 minutes discussing peace, kindness, gun safety or inclusiveness from 10am – 10:17am.

2. COMMUNITY WALKOUT IN SOLIDARITY WITH STUDENTS

We’re calling for Americans opposed to gun violence to organize community walkouts from (home, work, gym, place of worship) at 10am and stand in solidarity together.

Stop School Shootings NOW has asked churches across the country to ring their bells for 17 minutes, and we’ve had a HUGE response.

At noon, on March 14th, we’re also asking all Americans opposed to gun violence to rally at state capitols, city halls or town squares to demand gun reform from our elected officials.

One organized rally is in Atlanta, Georgia at 12 p.m. Students, parents and teachers will be rallying at noon at the Georgia State Capitol to demand policy makers take immediate action to keep kids safe in our school. The rally will be followed by face-to-face visits with elected representatives in the Capitol at which time we will demand specifically:

– A hearing for HB 10, a bill in the Public Safety and Homeland Security committee that would ban assault weapons and high capacity magazines.

Other reform Stop School Shootings NOW is calling for:

-Reinstate and strengthen the Federal Ban on Assault Weapons

– Raise the minimum age to purchase firearms to 21

– Ensure a complete universal database of those banned from buying firearms

-Require licensing and insurance for all gun owners

Who should participate? Everyone who wants kids and teachers to be safe at school should participate in this rally. What is the plan? We’ll rally at Liberty Plaza at noon. We’ll hear from students, teachers and parents who are leading our cause, and then we’ll take the VOTERS to the LEGISLATORS! We’ll file into the Capitol to bring the VOTERS/CONSTITUENTS directly to their REPS. Congress is in session, so there will be plenty of time to make sure EVERYONE who wants to meet with their representative has an opportunity to do so. Why rallies, why now? Students and teachers aren’t safe in America’s schools. Mass murder weapons are too easy for disturbed people to get and use. Too many school shootings have happened without any meaningful change to laws that would help prevent them. The murder of 17 people at Marjory Stoneman Douglas High School on February 14th was yet another unbearable loss. It is a call to action. It is the “tipping point.” Our kids are taking the lead to demand action and to honor those who have been victims of gun violence. Their energy and determination are inspiring. We are already seeing kids across the United States organizing walkouts, marches and rallies, school by school, town by town. Their numbers and their voices are finally getting the attention of the decision-makers and causing changes on a scale and at a speed that special interests assured us all were impossible. This nationally-organized day of walkouts and rallies will amplify our children’s voices and show them that we have their backs.

ATLANTA PUBLIC SCHOOLS: Schools will allow students to participate in the walkout.

CHEROKEE COUNTY: Schools will allow supervised activities for students wanting to participate.”Students who participate in the events will not face academic penalty or disciplinary action as long as they promptly return to class at the event’s conclusion.”

COBB COUNTY: Schools will not allow students to walk out. The county said it “will work with students to identify the best methods to accomplish this demonstration of empathy without interruption of normal school operation, which is a policy violation and potentially jeopardizes student and staff safety.”

DOUGLAS COUNTY: Schools will not allow students to protest by walking out while school is in session. Officials said they will offer “suggestions to students on other means of communicating their desire for change that do not involve leaving school property.”

FAYETTE COUNTY: Schools will allow students to gather on school grounds but “also ask students not to move off of campus for their own safety and security.” The school “supports their rights to peaceful assembly and appropriate free expression, but that the school/system priority is about teaching and learning. Should negative/disruptive behavior occur, such as walk-outs during the school day, the Fayette County Student Code of Conduct remains in place and will be enforced accordingly.”

FULTON COUNTY: Schools will allow students to “express themselves peacefully in safe events that will not disrupt instructional time.” Officials said “middle and high schools will adapt schedules to allow students to express their support using established protocols and guidance from school and district leadership. All activities are optional.”

GWINNETT COUNTY: Schools will not allow students to walk out. The county said the decision has no connection to the cause, but “based solely on what is best for students in terms of retaining an
orderly and safe school environment.”

HENRY COUNTY: School officials will not stop student participation but will not promote the events at the schools.

PAULDING COUNTY: Schools will not allow students to walk out. The county said, “while the school district supports the rights of students to demonstrate peacefully and respectfully, this event encourages a violation of campus security protocols that our schools cannot facilitate.”