Editor’s note: For the latest updates on this story, click here.

The break forced City Schools of Decatur and DeKalb County Schools to close for the day. Restaurants in the county have also been advised to shut down for the day.

The break occurred on Buford Highway. The county has also issued a boil water advisory.

The county just announced that the break has been isolated. A news conference is scheduled for 11 a.m.

UPDATE: DeKalb County workers have isolated the 48” water main break near Buford Highway. Work will begin on assessing damage to the water system and restoring pressure and flow throughout the system.

There’s currently no estimated time of repair. The county’s Police Department headquarters is currently without power, a county spokesperson said. The county has opened its emergency operation center in response to the break.

“State resources are also being deployed to ensure public safety,” the announcement from the county says. “Eight tankers are being brought into the county to supply water for fire protection and to fill chillers at hospitals. The state is on standby to assist as needed.”

Here is the latest update from DeKalb County:

DECATUR, Ga.— Crews are working locate and isolate the source of a large water main break on Buford Highway which is causing low water pressure in the area.

A break has occurred in a 48-inch transmission main near 5718 Buford NE Highway, Doraville.

Currently, there is no water at the DeKalb County Police Department Headquarters in Tucker.

The county’s fire department is working with other agencies to address low water pressure along Buford highway.

The watershed customer service line is busy. Customers should check with www.dekalbcountyga.gov. for updates.

While DeKalb County’s water plant is pumping at capacity, the plant is expiring low pressure.

In an abundance of caution for our citizens and to protect the public from any potential health hazards, residents in the affected area are being asked to boil water for at least one minute after water comes to a rolling boil prior to drinking, cooking or preparing baby food.

Residents are advised to conserve water.

Here is additional information about the boil water advisory.

TO: RESIDENTS of DEKALB COUNTY

A large diameter water main break is causing water pressure in parts of the water system to drop to dangerously low levels. When this occurs a potential health hazard may exist in these areas of zero pressure from backflow and/or back-siphonage of water of unknown quality into the water distribution system.

DeKalb County Department of Watershed Management, in an abundance of caution, is issuing a Boil Water Advisory for the entire system. In order to protect the public from a potential health hazard, all customers that have experienced water outages and/or low water pressures are advised to “boil” all water prior to use for drinking, cooking, or preparing baby food. The water should be boiled for at least one minute after reaching a rolling boil. Customers should continue to boil their water until they are notified that the water system has been restored to full operation, and that the microbiological quality of the water in the distribution system is safe for human consumption.

If you have any questions, you may contact 770-270-6243 or check www.dekalbcountyga.gov for updates.

A resident said DeKalb County Watershed’s emergency line was jammed up and it’s impossible to get through.

Due to the water main break:

– Senior centers will close at noon.

– The Board of Commissioners has cancelled the following meetings scheduled for today:

– DeKalb WorkSource’s Returning Citizens Expo has been cancelled for today and will be rescheduled.

Currently, commercial and residential collections are on schedule.

Public safety personnel and those required to deal with this emergency should follow their emergency staffing plans. Employees with questions should contact their supervisor.

The Health Department sent the following email to restaurant operators advising them to stop serving food if they do not have water.

Please be advised the entire county is under a boil water advisory. More information and water outage updates may be obtained by accessing the DeKalb County website https://www.dekalbcountyga.gov/

Per the Food Service Rules and Regulations 511-6-1-.03(2)(n) if an imminent health hazard exists because of an emergency such as a fire, flood, interruption of electrical or water service for two or more hours, then operations are immediately discontinued and the Health Authority (DeKalb County Board of Health) is notified.

If you do not have water or low water pressure and are unable to flush toilets, wash hands then your business should immediately cease operations.

DeKalb Medical sent an alert to patients informing them that this morning’s elective surgeries will be rescheduled:

Due to a county water main break, water pressure is low right now. Patient safety is always are number one priority and please be aware that we have measures in place to keep our current patients safe! However, elective surgeries scheduled for later today will be rescheduled. We will keep you updated.

City Schools of Decatur cancelled classes for the day at 9 a.m.

CSD had previously announced the school opening would be delayed by two hours, but warned parents to prepare for the possibility of school being cancelled.

STONE MOUNTAIN, GA. – All campuses in the DeKalb County School District (DCSD) will release early on Wednesday, March 7, 2018, due to the impact of a water main break in the county. A substantial number of DCSD families and campuses are without water service.

Early release times are as follows:

Lack of water service impacts sanitary conditions, food preparation and many aspects of business at the school and district levels. The scope of the water main impact outpaces the district’s ability to provide alternative solutions.

“The health and safety of our students is always the top priority. The impact of the water main break and repairs makes early release the most prudent route,” said Superintendent/CEO R. Stephen Green.

The city of Avondale Estates sent the following announcement to its residents.

John Spink, a photo journalist with the Atlanta Journal Constitution, posted this video of the break:

At the Shamrock Plaza Publix, there was a line at the bottled water aisle. People with medical needs were competing with people who were stuffing their shopping carts full of cases of water. The store was not imposing a limit on the number of cases customers could buy and was quickly running out of supply at 8:30 a.m. 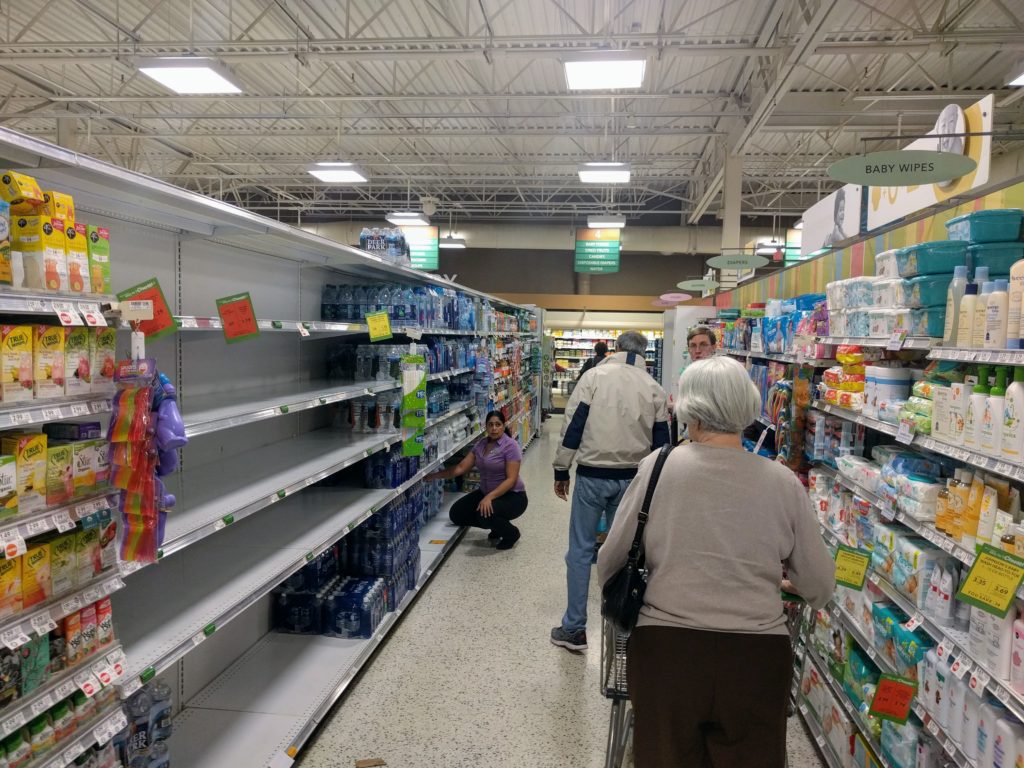 The DeKalb County Animal Shelter says it has an “urgent” need for water donations.

Due to a water main break in DeKalb County, we are in URGENT need gallons of water for the hundreds of animals in our care. You can drop water off at our shelter located at 3280 Chamblee Dunwoody Rd. Chamblee, GA 30341.

DeKalb County Commissioner Jeff Rader said it’s too early to tell whether the break was caused by faulty infrastructure or something else. The last time a water main break caused this many problems was in 2015. In that incident, a water main break at Henderson Mill and Evans roads led to days of water quality issues and a boil water advisory that hobbled local restaurants because they couldn’t clean dishes.

“I think that each one of them is a different situation,” Rader said. “We don’t know yet what the issue is here.”

Decaturish asked Rader why the DeKalb County hasn’t built some redundancy into the system so water main breaks don’t hobble the whole county?

“There are two basic ways you can approach this,” Rader said. “One is to make our system redundant, which is expensive and is inconsistent with the way the county grew over time, and the other is to interconnect with other systems and be able to isolate problems and have the rest of the system working, I think that’s  a valid question as to whether we can make some structural improvements to the system that will limit the extent of impact when a main fails.”.