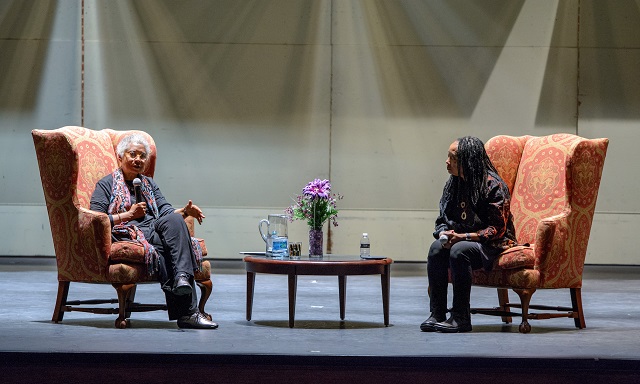 Pulitzer Prize-winning author Alice Walker with journalist and cultural critic Valerie Boyd during the Q&A portion of “An Evening With Alice Walker” held at Agnes Scott College on Sunday, April 24, as part of the college’s annual Gay Johnson McDougall Symposium on Race, Justice and Reconciliation. Photo provided by Agnes Scott

The poet, novelist and activist was the featured speaker for this year’s symposium and gave a lecture inspired by her life’s work.

Walker was introduced by Dr. Beverly Guy-Sheftall, a black feminist writer and professor at Spelman college. She also read several of her poems throughout the lecture, which was followed by a Q&A led by journalist and cultural critic Valerie Boyd, in which Walker responded to audience questions.

Walker won both the National Book Award and the Pulitzer Prize for Fiction in 1983 for The Color Purple, which was adapted as a movie in 1985 and a Broadway musical in 2005.