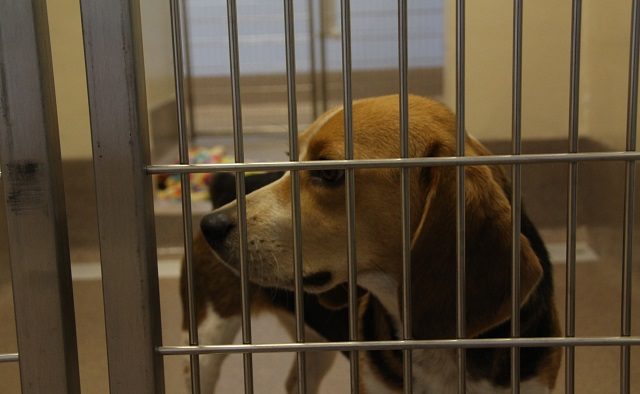 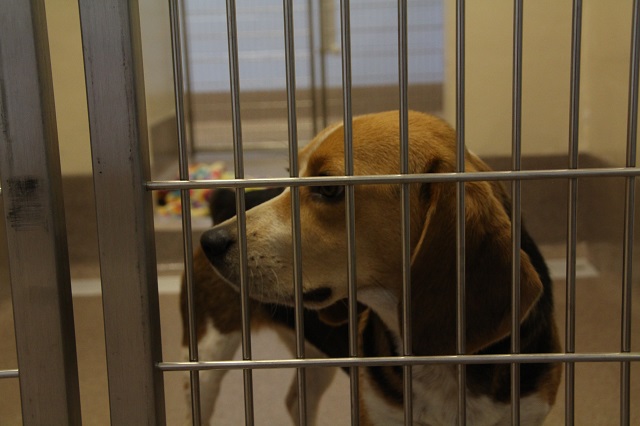 A dog at the DeKalb County animal shelter. File photo by Ellie Ritter

The county is planning to rebid its contract for animal shelter services, a contract currently held by LifeLine Animal Project.

But the draft of its request for proposal for the bid has some animal advocates worried that the county is trying to undermine LifeLine.

LifeLine is a non-profit revered among animal advocates for pursuing a “no-kill” animal shelter. In a county beset by embarrassing scandals, LifeLine’s shelter is one of few aspects of county government that receives unanimous praise from residents.

The county recently extended LifeLine’s contract to November while the new RFP is developed.

Word of the RFP draft has spread throughout the community. A local group, Advocates for DeKalb Animals, published Facebook a post about it that was shared almost 300 times. The group has encouraged supporters to show up to future county commission meetings to show their opposition to the changes in the draft RFP.

Sonali Saindane, chair of DeKalb’s Animal Services Advisory Board, has concerns about some of the language added to the draft RFP. She said the changes could make it harder for LifeLine to operate in DeKalb County.

“Five years ago, Animal Services and the Shelter Operations was managed by the county under [Director of Enforcement Bethany] Xan Rawls,” Saindane said. “The euthanasia rate was 50 or 60 percent. There was a huge public outcry for better leadership. The county decided to outsource the shelter operation function.”

In the years since LifeLine took over the shelter, the euthanasia rate dropped to 10 percent.

But there has been conflict between the Animal Enforcement and the Animal Shelter division, she said.

“Traditionally there’s been tension between the two,” she said. “Because they have opposite and conflicting missions.”

Enforcement tends to manage space by euthanizing animals, Saindane said, while LifeLine’s focus has been on managing space through adoptions.

She said it’s her understanding that LifeLine’s contract is currently managed by the county’s Procurement Department. The draft RFP contains language about a “County Project Administrator.” Saindane said she does not know who that would be but said it could be an attempt to put LifeLine back under the control of Animal Enforcement.

If that were to happen it would “pose problems,” because Animal Enforcement would be less objective, Saindane said.

Another aspect that worries Saindane is language pertaining to rescue groups. Currently the county holds all animals for three days to give their owners time to reclaim them. After that time, rescue groups can adopt them. The new language would require the shelter to make rescue groups wait three additional days, so the public would have more opportunities to adopt these animals. That means rescue groups would have to wait six days. The result will be a slower adoption rate from the shelter, she said.

“Space is very limited and very precious,” Saindane said. “The longer an animal stays in a shelter, the longer the risk is of it being euthanized.”

No shelter is required to generate a report like this, Saindane said. Doing so would be extremely cumbersome. The end result will be less rescue partnerships with LifeLine, she said.

“That sounds good in theory, but in reality it’s going to scare many rescue groups away when they can pull a dog from another shelter without as much work,” she said.

The county did not directly address these concerns. A spokesperson said the county is still seeking public comment on the draft RFP.

“The Animal Services RFP process will continue to be one of inclusion and transparency for citizens and stakeholders in the animal community as the draft scope of work is finalized,” the spokesperson said. “As part of the process, the DeKalb Animal Services Advisory Board is receiving community feedback on this draft at [email protected]”

Here is the draft of the RFP with the key sections highlighted: