As Decatur calms traffic on residential roads, East Lake Drive residents ask, ‘What about us?’

As Decatur calms traffic on residential roads, East Lake Drive residents ask, ‘What about us?’ 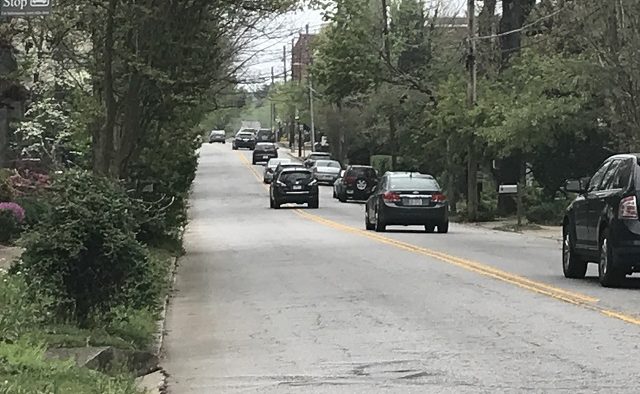 Cars routinely cross over the center line on East Lake Drive. The city says the road is being re-striped to correct this problem. Photo provided by Elizabeth Durel
Share 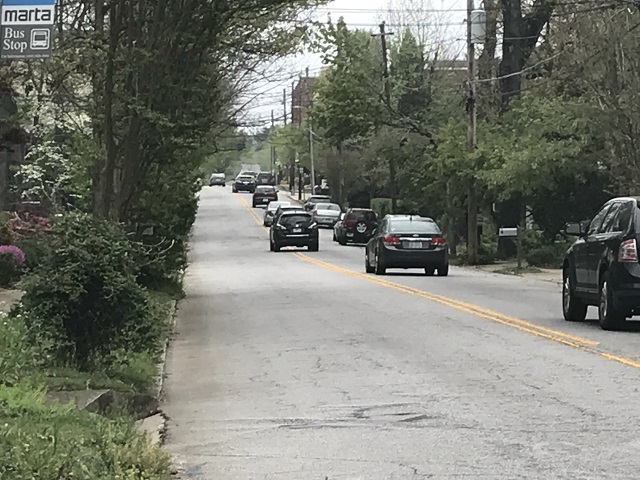 Cars routinely cross over the center line on East Lake Drive. The city says the road is being re-striped to correct this problem. Photo provided by Elizabeth Durel

This  story has been updated.

By declaring the streets Residential District Speed Zones, it will make it easier for Police Officers to issue tickets to people going more than one mile over the speed limit. On most streets, drivers must be traveling more than 10 miles over the limit to receive a ticket.

But what about the East Lake Drive? Residents on that street have been asking the city for years to do something about speeding on the street.

Anthony Durel said side swiping of parked cars is common. There was also one incident where a dog on a leash was killed by a speeding car.

“Those of us who live on East Lake are keenly aware that these are just indicators of a much more pervasive problem,” Durel said. “Drivers heading north routinely accelerate to high speeds from the stop sign at 2nd Avenue and drivers heading south do the same from the traffic signal at Park Place. Compounding the problem is a general lack of traffic control with no enforcement, no speed bumps, and insufficient cross walks to name a few.”

The road, which has a speed limit of 30 miles per hour, is considered a “collector” road by the city, meaning it links residential streets to “arterial” roads that move traffic through the city. In this case, the arterial road it connects to is West College Avenue. Because it is a connector and not a residential road, the city does not think it is eligible to be a Residential District Speed Zone, according to Assistant City Manager David Junger.

“That is our belief at this point,” Junger said.

He said the city is working with residents on their issues. He noted that the city is restriping the road, which extends from Park Place to West Pharr Road.

He said the city is “moving the center line to a more appropriate location that accounts for the on-street parking allowed on the north end of East Lake.”

Junger said he thinks the speed limit for the road is appropriate. He said the city conducted a speed volume study within the last year, but it “didn’t help their case.”

“If you’re out there and someone comes out doing 35 miles an hour and you’re two feet from the road, it’s going to feel like they were doing 50 just because of your proximity to the street,” he said.

He said the city could do more to reduce speed. He noted that on Sycamore Drive received curb extensions known as “bulb-outs” to slow down drivers. Junger said the city is currently focused on a “road diet” for West Howard Avenue.

“This year we’ve already used the budget we’ve established for this type of work,” he said.

The answer is unlikely to satisfy residents who have been pleading with the city to do something on their street.

Kelly Miller, who calls East Lake an “Autobahn” said she hoped the street would be on the list of Residential District Speed Zones approved by the City Commission.

“I’m absolutely floored that our street hasn’t been mentioned in the list for traffic calming,” she said. “We’ve been overly vocal about our traffic worries for years. This has been a growing concern as the conditions of the street have become more severe. We’ve had meetings, there have been emails, promises that we’ll get a traffic study. They even put a speed reader on our street for a few weeks until the thing stopped working. I called the city hoping they’d get the thing up and running but they just took it down. So much for that.”

Gretchen Cobb said the neighborhood got some relief last year after a storm knocked down a huge tree, resulting in the road’s closure.

“As neighbors we all really enjoyed when the street was closed off,” Cobb said. “Our kids were thrilled to ride their bikes up and down East Lake for several days. And when it opened back up to traffic, the speed took my breath away.”