This story has been updated. Please see the correction at the end of this story.

Update: The agenda items mentioned in this article were approved at the April 2 meeting. Here is our earlier story …

The Decatur City Commission at its meeting on April 2 will consider a request to make it easier to issue speeding tickets on certain streets.

Specifically, the commission is being asked to declare the streets Residential District Speed Zones.

City of Decatur Project Manager Courtney Frisch said the speed limits will not change. What will change is the ability of officers to write tickets. She said that currently, officers using speed detection devices can only write tickets if people are going more than 10 miles an hour over the posted speed limit. If the commission approves creating the Residential District Speed Zones, tickets may be issued to drivers going more than one mile per hour over the limit.

“If it gets approved, it allows the police department more opportunity for enforcement,” she said. “It’s really what it is.”

A memo attached to the City Commission agenda says. “Additionally, these streets are considered traffic generator streets. They either experience significant traffic as a result of school proximity or handle high volumes of peak hour traffic because they directly connect with streets with that support higher vehicular volumes and speed limits.”

The changes would affect the following streets (items in blue already are part of an active request from neighborhoods for traffic calming): 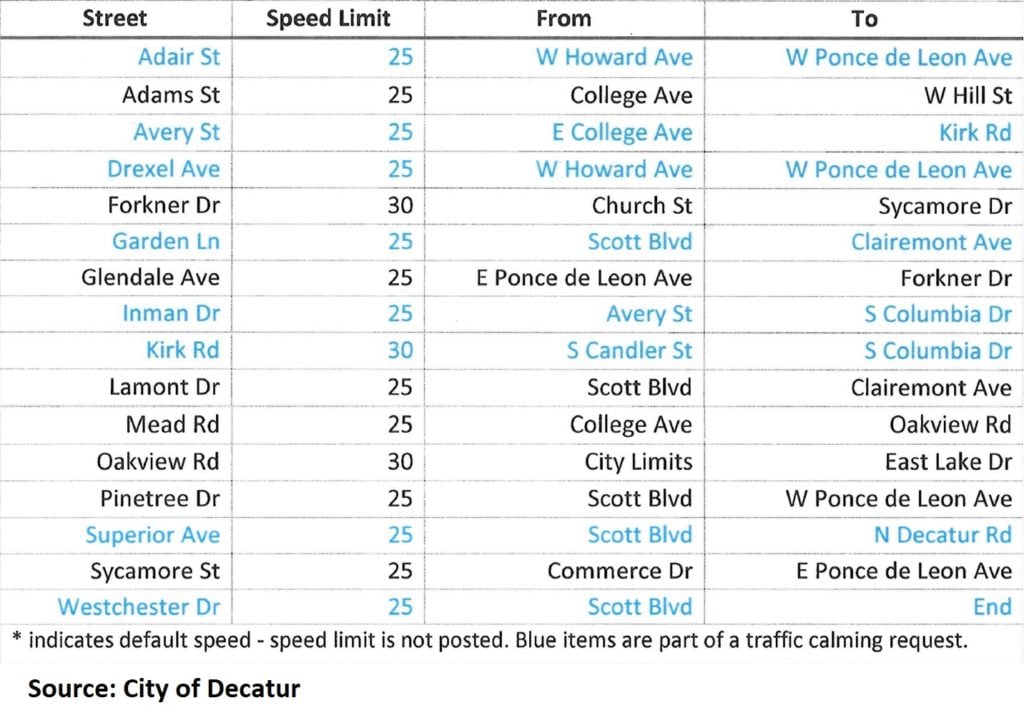 In other business on the April 2 agenda:

– Commissioners will consider awarding a $39,660 contract to Wilburn Engineering to install Rectangular Rapid Flashing Beacons on West College Avenue in front of Agnes Scott College and at the intersection of South Candler and East Dougherty streets.

“The existing solar-powered Rectangular Rapid Flashing Beacon (RRFBs) were installed in 2011 as a joint effort with Agnes Scott College to provide safe pedestrian access for Agnes Scott students and the City Schools of Decatur Safe Routes to School program,” a memo from Senior Engineer Michelle Hirose to Assistant City Manager David Junger says. “Due to the dense tree canopy in the area, the existing RRFBs have been operating intermittently over the past year and are currently non-functioning. City staff have attempted to address the operational issue by servicing the equipment and installing new batteries. The proposed beacons will be powered from a metered connection to Georgia Power at each location.”

– Commissioners will also be asked to consider approving a $169,200 agreement with Dianna Hunt and Associates for right-of-way acquisition services for the Clairemont-Commerce-Church Street pedestrian safety and bicycle trail improvements project.

The commission meeting will begin at 7:30 p.m. and will be held at City Hall, located at 509 North McDonough Street. All meetings are open to the public.

Correction: An earlier version of this story mistakenly misrepresented what this agenda item does. Instead of changing existing speed limits on these roads, it actually lowers the speed threshold for issuing speeding tickets on these streets. The article also misidentified the author of one of the memos. This story has been updated with the correct information.