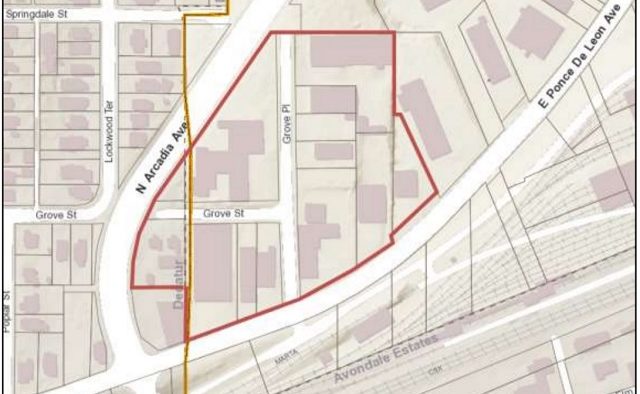 A map showing the location of the parcels being considered for annexation. Photo obtained via the city of Decatur.
Share 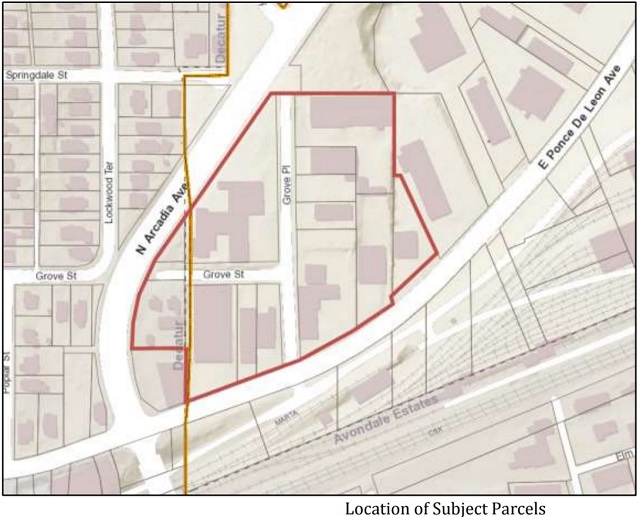 A map showing the location of the parcels being considered for annexation. Photo obtained via the city of Decatur.

A developer and several anxious property owners will have to wait another month before they find out if they’ll get to join the city of Decatur.

The Decatur City Commission’s regular meeting on April 16 was dominated by the proposed annexation, which also required a change in zoning to accommodate a proposed mixed-use development. The city’s Planning Commission had already recommended denying the rezoning request from Alliance Realty Services for the 11 parcels on east Ponce de Leon Avenue and Grove Place.

The parcels near the Avondale MARTA station were zoned industrial, but Alliance Realty Services is planning a mixed-use project there, one that could include a Publix grocery store. The project will also include an apartment complex. During the meeting on April 16, it was revealed that the developer wants to build 289 multi-family units on the site, though that number may be reduced when all is said and done.

Commissioners ultimately tabled approving a master site plan for the development and special exceptions to the zoning sought by the developer, as well as the annexation petition itself.

“The commission as a whole wanted to see some changes. [It] was an impasse where we had the opportunity to defer it to a later date and work with the developer and address some things that were of concern to some of the commissioners,” Commissioner Scott Drake said.

“I think there were a lot of unanswered questions,” Garrett said. “I think we had a split vote on the change in the land use and the zoning and I think we had some questions from the school board. We had questions about the project itself, especially the special exceptions. We felt like it would be better to give the applicant the opportunity to come back and make some changes before we completed the process.”

Commissioner Kelly Walsh said it was “definitely a complicated vote” for the city commission.

“There is more work to be done to ensure that we don’t miss an opportunity to help define what will be another eastern gateway into Decatur,” she said. “I want to get this right, particularly the open/greenspace areas of the development, and the walkability aspect of the development, such that it does complement and further reinforce the land use and zoning designations we discussed last night. If we can get that right, I think we will have done the right thing there to develop that eastern boundary of Decatur.”

The commission did approve the overall zoning for the project. Drake voted “no” on those items. Drake said that moving forward with all the zoning items and annexation petition in one night seemed like a lot for the commission to take on at one time.

“Having somebody who wants to come in an annex into Decatur, that’s great,” Drake said. “To have an annexation and change in zoning and master plan all in one sitting to me is rather much.”

“The potential for annexation is still on the table,” Smith said. “We have very stringent rules on what we’d like to see. I’d like to see a little more work done to potentially eliminate some of those special exemptions.”

The exemptions the developer wants are related to the facade orientation of the property and the building step backs. The developer wants an exemption to allow the primary facade of the grocery store to front the internal surface parking of the project and is seeking an exception from the 50-foot building setback requirements to allow a maximum height of 68 feet for the residential building.

Numerous people spoke about the proposal. The property owners and residential neighbors spoke in favor of it. Two DeKalb County commissioners and a member of the Decatur School Board publicly voiced their concerns about the project.

County Commissioners Jeff Rader and Kathie Gannon said the project would eliminate the potential for industrial uses on the site.

“The need for industrial property is real,” Gannon said.

Rader said the development would create traffic problems for the area. He noted that the county hired the Carl Vinson Institute of Government at the University of Georgia to study the effect of annexations on the county.

School Board member Heather Tell said the city should carefully study the impact the new apartments would have on schools before moving forward with the annexation proposal.

“My understanding is this will bring 289 units and CSD has estimated 51 students will be living in this development,” Tell said. “We see this could have a significant impact on us.”

Den Webb, an attorney for the developer, disputed that number and said there would only be 12 to 20 students living at the apartment complex.

Representatives from Your Pet Crematory on East Ponce also spoke out against the proposal during the meeting. The owner, Christine Hunsaker, could not be there on Tuesday but has said the project encroaches on industrial uses in the area.

But none of the residents who spoke said they would regret seeing those industrial uses go.

Hans Utz, a Decaturish columnist who also lives in the city, spoke favorably about the project.

“This property is under-utilized in its current form,” he said. “There’s no viable or desirable future use under its current zoning.”

Another speaker who lives nearby said when she walks out of her home and sees an old car on a pole in the neighboring junk yard. She said redevelopment would make the neighborhood safer for pedestrians.

“Redevelopment would encourage walkability,” she said.

Another speaker said that the property may be zoned industrial, but no one wants to build anything industrial there, not with $500,000 town homes across the street.

“The best thing that could happen to Decatur is to rezone it to do something nice in this area,” he said. “Right now, it ain’t that nice.”

The City Commission will reexamine the annexation petition at its May 21 meeting.

Editor’s note: Most of this story was reported by viewing a live video stream of the April 16 meeting.