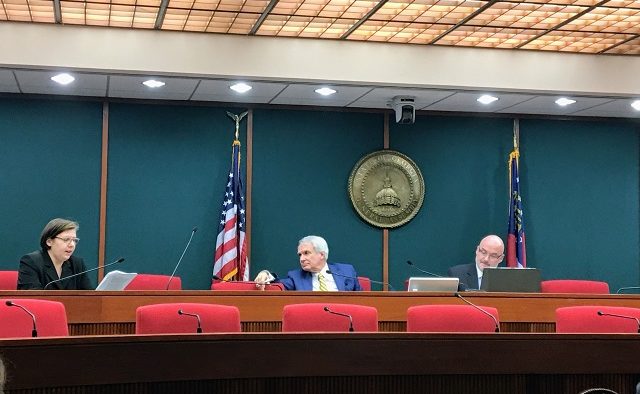 The city of Decatur has fired another salvo at the state Immigration Enforcement Review Board, the entity reviewing a complaint filed against the city by Lt. Gov. Casey Cagle.

The city has filed two lawsuits accusing the board of violating the state’s Open Meetings and Open Records laws.

Phil Kent, an IERB member who recently recused himself from Decatur’s case, told Decaturish, “We just received these complaints. We will review and have a detailed answer to the city of Decatur soon.”

The city alleges the board does not provide adequate notice to the entities it is investigating and has refused to turn over records the city has requested. The city’s lawsuits, filed in Fulton County Superior Court, ask the court to require IERB to comply with the state’s sunshine laws and to compensate the city for legal expenses incurred by filing the suit.

City Attorney Bryan Downs told Decaturish, “The veiled manner in which the IERB is conducting its proceedings is not just detrimental to the city of Decatur, but also to the public as a whole.”

“With complaints pending against local governments and school systems across the state, Georgians from the coast to the mountains should be able to follow developments in these cases,” Downs said. “But the IERB’s closed-government practices reduce, and in some instances prevent, the public and the press from monitoring the IERB’s work. It is our hope that these enforcement actions will cause the IERB to change its practices so that this state board complies with, rather than disregards, Georgia’s public policy in favor of open government.”

Cagle, who is the leading Republican candidate to replace Gov. Nathan Deal, last year filed a complaint accusing Decatur of being a “sanctuary city.” It isn’t and the city has resisted calls from residents to designated Decatur as a sanctuary city. What Cagle was referring to was the city’s decision put in writing a longstanding policy regarding cooperation with Immigration and Customs Enforcement.

Cagle has continued to make a campaign issue out of Decatur’s policy. He has implied that city of Decatur officials should be charged with crimes after the U.S. Department of Homeland Security signaled that it intends to charge officials in so-called Sanctuary Cities. Cagle has previously said state funding should be withheld from Decatur. The Lt. Governor has declined repeated requests for comment from Decaturish.

City Attorney Downs scored a victory against the IERB last month when Kent, a member of the IERB, recused himself from hearing the case.

On Oct. 29, several days before Cagle filed his complaint, Kent participated appeared on a local political talk show,  “Georgia Gang.” During the program’s “Winners and Losers” segment. Kent declared Cagle a “winner” for picking a fight with Decatur over its policy regarding immigration suspects.

When Downs complained, Kent stepped aside. Board Chair Shawn Hanley has also been asked to recuse himself from the case for statements he made to the media that were critical of Decatur’s policy. According to an article in the Atlanta Journal Constitution, Hanley criticized Decatur’s policy in an interview. Hanley has not recused himself.

Two of the board’s other members were appointed to the Immigration Enforcement Review Board by Cagle. It’s not clear whether they have recused themselves.

Here are the copies of the lawsuits filed by the city of Decatur: