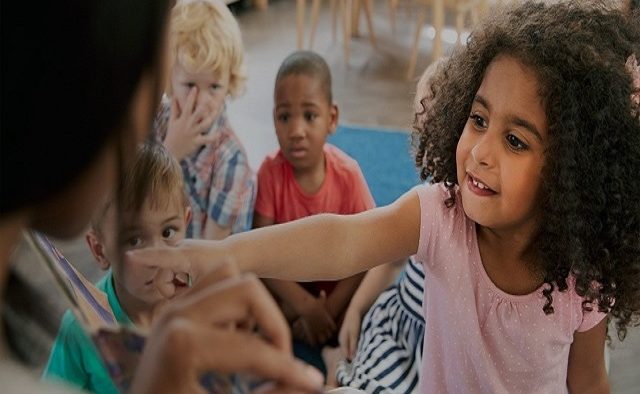 A few years ago, when longtime Decatur resident Kate Kennedy was driving through downtown Atlanta, she saw a woman sitting on the sidewalk with four small children. Little did she know – that woman would change Kennedy’s life.

“I have four children, and I could not imagine what her life must be like,” Kennedy said.  “One of them had no shoes. None of them had jackets, and I am guessing that the shopping cart by her side contained all of their belongings.”

Kennedy wondered what she herself would want or need in a situation like that. Searching for a solution, she and some friends brainstormed ideas, ultimately deciding to start a weekly program at St. Luke’s Episcopal Church.

“The program was a tremendous success except that we were shocked at the number of school-aged children who repeatedly came,” Kennedy said. “We began to wonder why they were not in school. Across the board, their parents told us that when you do not know where you will sleep at night or where your next meal might be or where to get shoes and clothes for your rapidly growing children, the process of enrolling your children in school becomes an overwhelming burden that simply falls by the wayside.”

While Kennedy and the other volunteers with Parents’ Morning Out realized the need for a full-time school for homeless children, it felt like an “impossible dream,” Kennedy said. Still, she approached Boyce Ansley, a prominent Atlanta philanthropist and personal friend and mentor of Kennedy’s with her idea for the school.

“She immediately jumped on board,” Kennedy said.

In June 2016, as Kennedy began pursuing the possibility of opening a school, Ansley passed away. After her death, Kennedy met with Ansley’s husband and daughter to present them with the idea for the school, intending to name it after her.

Kennedy wanted to make the private school tuition-free for children in the community who have experienced homelessness. To be eligible to attend the school, the family of the student must be in active case management at an area shelter or agency such as Crossroads.

Julia Levy, a member of the board of directors for the school, hopes that by encouraging the families to get support both from the school and other homeless agencies, any student – regardless of circumstance – can flourish.

“With a strong community of support, these children can thrive and succeed in school and in life,” she said.

Levy, who is also a Decatur resident, became involved with the school after founding the Global Village Project, a school for refugee girls in Decatur. This experience made Levy more aware about the difficulties refugee and homeless students face and gave her insight into the school structure these students need.

The Boyce L. Ansley School, which will open its doors on Peachtree Street in Atlanta this August, will offer students breakfast, lunch and snacks each day, as well as school supplies and uniforms. Aside from day-to-day materials, the school will also have resources to help serve the entire family, Kennedy said.

“We have already established partnerships with many of the area shelters including Salvation Army, City of Refuge and Solomon’s Temple,” she said. “As well, we have robust partnerships with Georgia State University, The Howard School and The Atlanta Speech School to provide speech and language screening and assistance, and CHRIS 180, who will provide us with an onsite trauma counselor.”

Additionally, the school hopes to develop partnerships with agencies to help with immunizations and health screenings and educational testing for learning disabilities.

In its first year, the school will only have one pre-kindergarten class of 12-15 students, with a goal of adding one grade per year to become a pre-K through 8th grade school. The most urgent goal, though, is to ensure all students can read on grade-level by the time they complete 3rd grade, Kennedy said.

“Studies show, without a doubt, that if a child is not reading on grade level by the end of third grade, their ability to succeed is significantly impacted because after 3rd grade, teachers begin to teach through reading and no longer teach how to read,” Kennedy said. “This has been a tremendous problem in the homeless community since so many homeless children are not catching on to reading before it is too late.”

“Right now, students experiencing homelessness in Georgia are far behind their peers in school. I want our school to demonstrate that the circumstances these kids have found themselves in do not predetermine their futures,” she said.

She hopes that the school’s impact will go beyond the day-to-day work in the classroom.

“My biggest hope for the school is that we can make a permanent, positive difference in the lives of the children and their families that we serve,” Levy said.

Currently, the school’s staff is made up of a Board of Directors, an Educational Advisory Committee, a lead teacher, an assistant teacher, a full-time social worker and a part-time after-school coordinator. Kennedy serves as the executive director.

The school’s funds come solely from individual contributions and foundations. In February, Levy and Reynolds DeLisle, another founding member, hosted a Valentine’s Day tea to talk to women in Decatur about the school.

“We were amazed when these terrific Decatur women pitched in almost $9,000, which with our challenge matching gifts gave us $26,000 to fully fund breakfast, lunch and snacks for our students for an entire year,” Levy said.

Since then, two other private fundraisers have been held, and the board is currently planning two more events, Levy said. So far, the school has more than 200 individual donors, raising more than $200,000.

“Our vision is that the Boyce L. Ansley School will offer homeless children in our community the opportunity to receive the same top-notch education that our children were able to receive,” Kennedy said. “We will strive to be an academically excellent school which offers the special services and attention that homeless children require and deserve so that they can one day write a story that is beyond the circumstance and become self-sufficient and confident members of our community.”