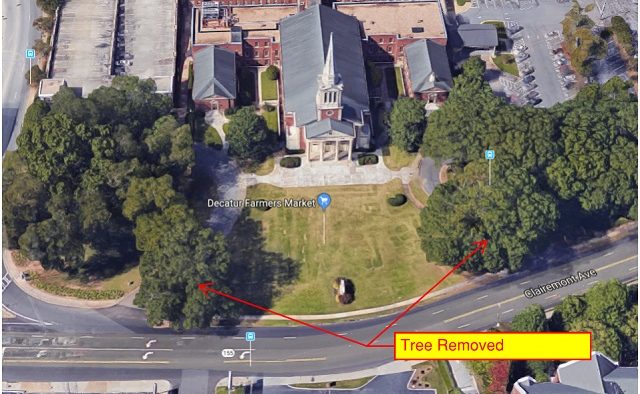 A map showing the locations of two trees that were recently removed by First Baptist Church Decatur. Photo provided to Decaturish
Share 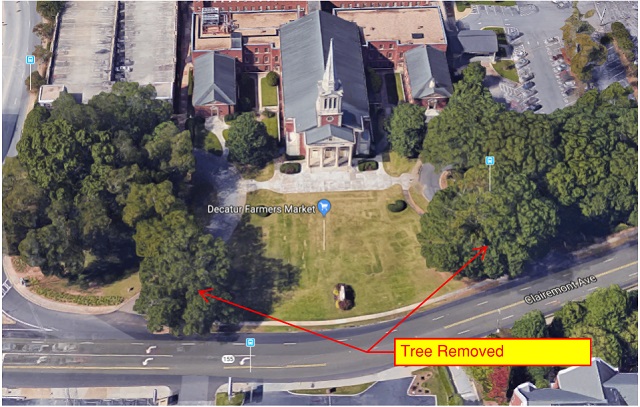 A map showing the locations of two trees that were recently removed by First Baptist Church Decatur. Photo provided to Decaturish

Numerous readers have emailed Decaturish asking about the recent removal of two large oak trees from the front of First Baptist Church Decatur.

The church says the trees were diseased and a safety hazard, a position supported by City Arborist Kay Evanovich. The church did obtain the proper permit to remove the trees, she said.

“The two Water Oaks were in a severe state of decline and diseased,” she said. “They had already lost major scaffold branches and had severe die back in the crowns.New trees will be planted.”

Readers also wanted to know why the trees couldn’t be saved. They asked if the church could have resolved the issue by trimming the problematic branches.

“The damage on the one tree could not be repaired,” Evanovich said. “Tree pruning could have eliminated the dead branches but the trees were dying and would have continued to lose branches until they finally failed completely or ceased to leaf out. The tree owner elected to remove the dying trees to remove the potential hazard.”

In a statement, the church said that last summer a tree limb fell and totaled two cars. The church said it contacted the city’s arborist and obtained the opinion of a second arborist before removing the trees.

Here’s the church’s full statement on the decision to remove the trees:

Earlier in 2018, the church was contacted about the health of the two large oak trees in front of the church. The information went through the proper individuals and committees for approval. The decision was to further pursue the subject because of the safety concerns and risks associated with the large, old trees. The church reached out to the City of Decatur arborist for an opinion on the trees. The response was that the trees were in decline and should be removed. A second arborist confirmed the need to have the trees removed.

The church reached out to its preferred tree service company and received a quote. The funds for the large project were allocated and the work was scheduled. Once the permit was obtained, the removal began.

The church is sad to see the beautiful cornerstone trees go. All of this is in the shadow of an event last summer when on a pleasant calm afternoon, a seemingly healthy tree limb fell and totaled two cars.

The church will continue to balance safety and provide a natural welcoming space in Decatur. We genuinely appreciate the community’s interest.

The church also provided these images of the trees in question: 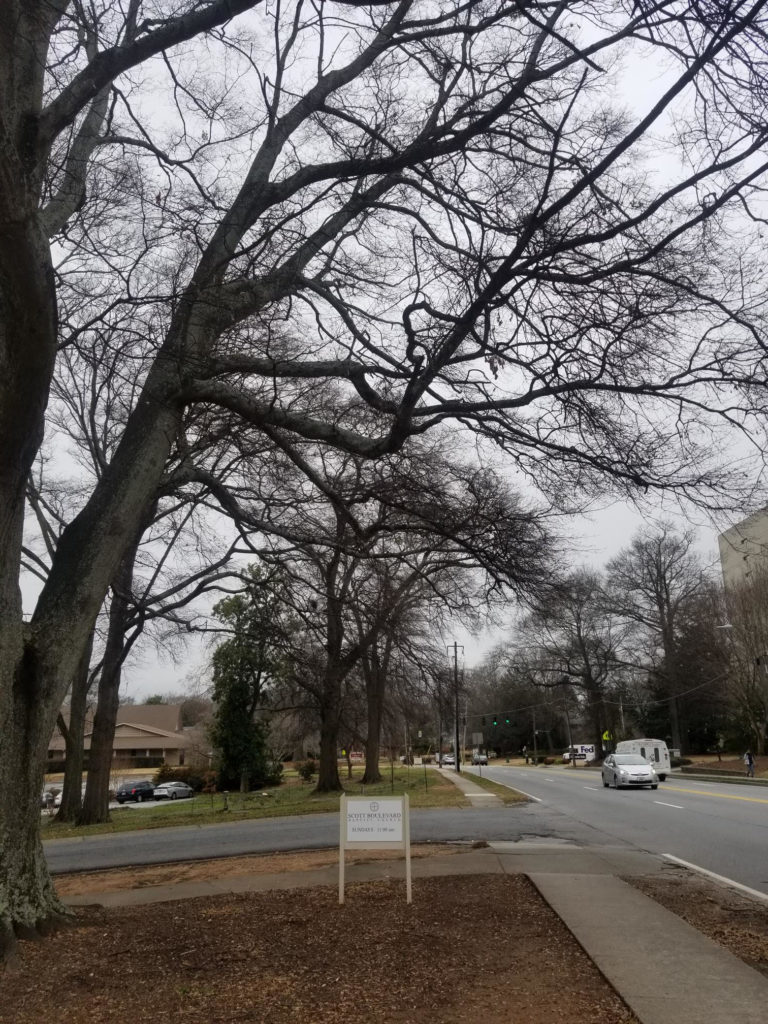 “The first image is of the largest tree. This depicts the risk the tree posed to Clairemont Avenue and pedestrians. Where the offshoot and the main tree meet there was continual weeping. The weeping indicates that the tree is compromised and is at a higher risk of splitting. The upper canopy did not produce foliage this season. Roughly a third of the tree did not produce foliage. This is not as noticeable from the street, because live portions masked the dead portions.” (Photo provided by First Baptist Church Decatur.) 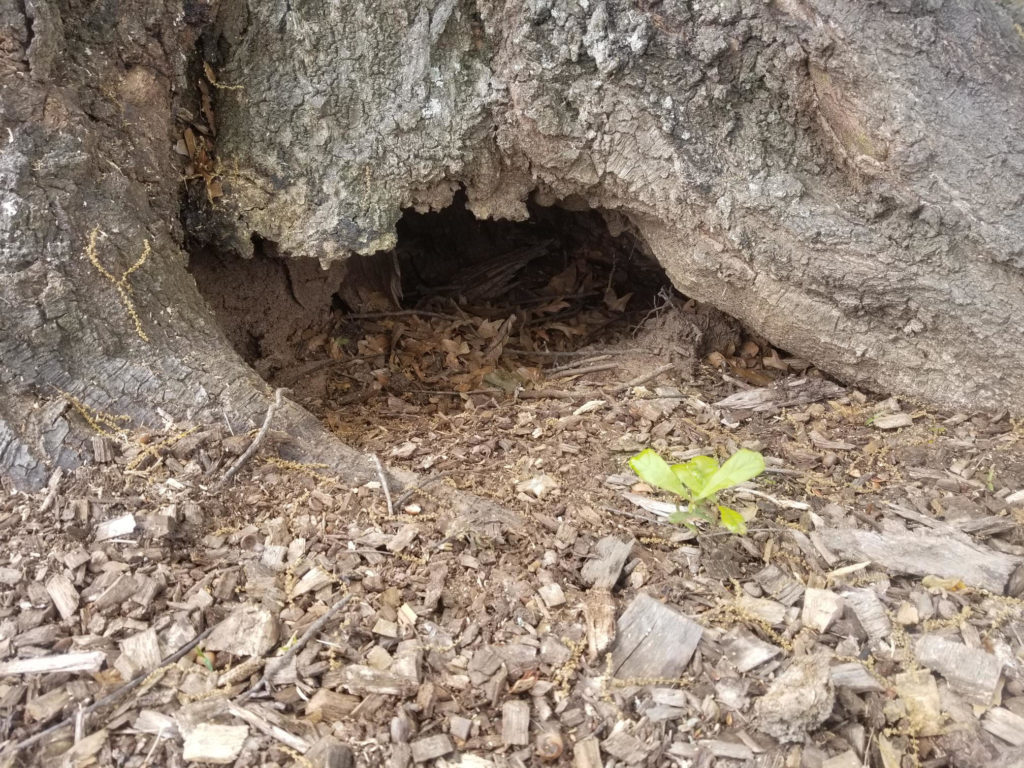 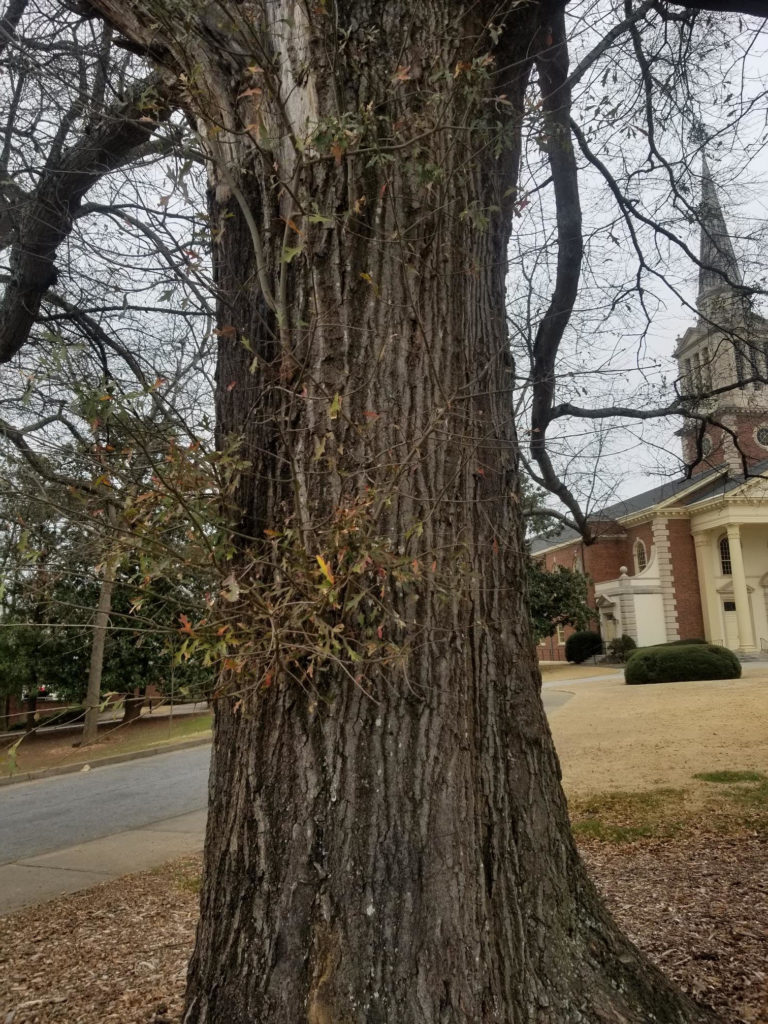