So what’s up with that plywood over the window of The Stratford Pub in Avondale?

So what’s up with that plywood over the window of The Stratford Pub in Avondale? 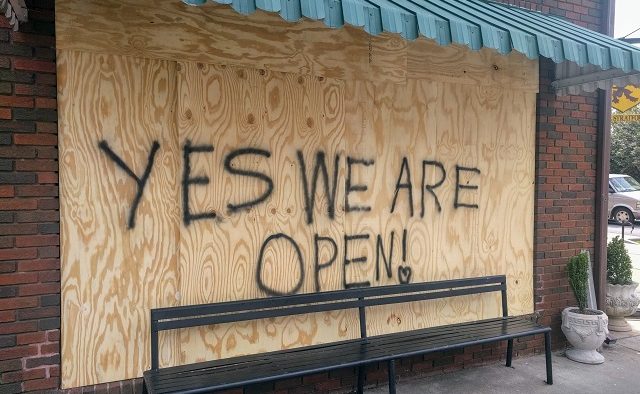 A piece of plywood covers the shattered window of The Stratford Pub in Avondale. Photo by Dan Whisenhunt
Share 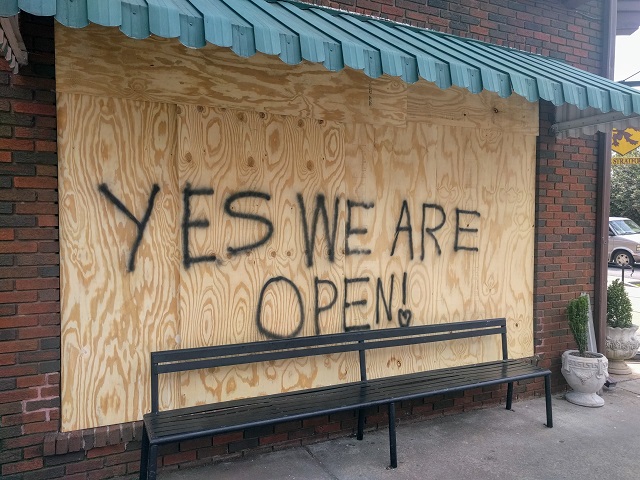 A piece of plywood covers the shattered window of The Stratford Pub in Avondale. Photo by Dan Whisenhunt

A reader contacted Decaturish with a question about the big piece of plywood where a window should be on the outside of Avondale Estates’ Stratford Pub.

The restaurant, which opened in the former Pallookaville space, covered the shattered window with the plywood and wrote, “Yes we are open!” on it.

The restaurant’s owner, James Maggard, says a semi-truck jumped a curb and kicked up a loose brick on the sidewalk, sending it flying through the window. The incident happened on April 11 at 8 a.m. No customers were in the restaurant at the time, he said.

“The semi truck was heading west on North Avondale, taking a right onto North Clarendon and couldn’t make the turn …,” Maggard said. “[The driver] tried to make the turn too sharp. The trailer portion rolled up onto the curb. When he snapped off the curb, it shot a brick up.”

He said it “could have killed somebody” if a customer had been in the restaurant at the time. Thanks to a bystander who stopped the truck to tell them what happened, Maggard was able to get in touch with the trucking company’s insurer to cover the cost of replacing the window, estimated to be at $3,000.

Avondale Estates Police Chief Lynn Thomas said, “A report was taken. Witnesses and surveillance footage enabled us to locate the driver of the truck. No criminal intent. Insurance companies are handling it.”