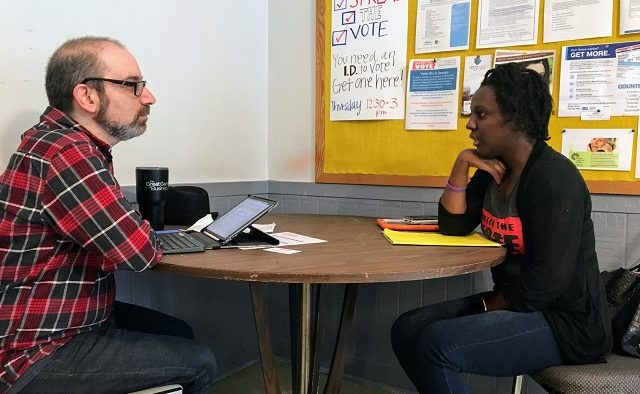 Fallon McClure, Georgia State Director for Spread The Vote, explains to a new volunteer what is required for Georgia residents to vote and how he can help them obtain the proper identification and paperwork for them. Photo by Gabriel Owens
Share 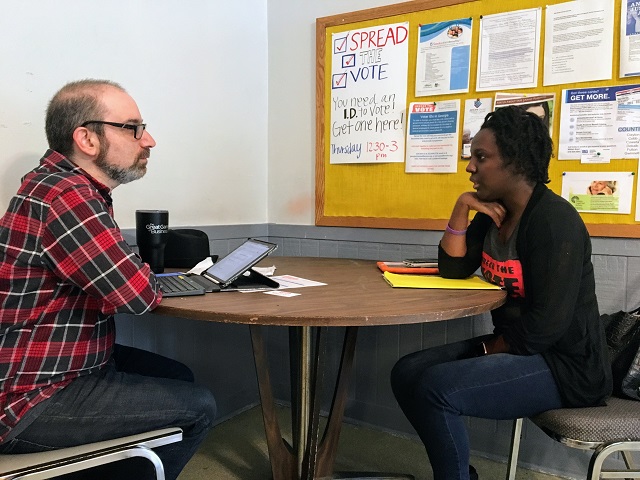 Fallon McClure, Georgia State Director for Spread The Vote, explains to a new volunteer what is required for Georgia residents to vote and how he can help them obtain the proper identification and paperwork for them. Photo by Gabriel Owens

In a small community center in Toco Hills, Fallon McClure explained to a new volunteer the difficulties many Georgia residents have registering to vote, starting with proper identification.

“Many have lost them and have no immediate means to get them back,” McClure said. “Some have never even had an I.D., or even a birth certificate.”

These are some of the challenges Spread The Vote has in trying to register otherwise eligible Georgia residents for voting. Spread the Vote is a non-profit organization dedicated to helping eligible voters obtain the necessary documentation to vote in local, state and federal elections in five states, including Georgia. McClure is the state director of the Georgia chapter.

“Georgia law requires a form of ID to register,” she said. “This could be a state issued driver’s license, military ID, passport, valid student ID, or tribal identification.”

The organization’s website calls voter ID laws “poll taxes,” a tactic used during the Reconstruction era after the Civil War to limit the rights of black voters.

“We believe that the only way to change our country is to ensure that every citizen can vote, and if that means that they need a state ID, then we’ll make sure they have one,” the website says.

Georgia is one of several states that has passed voter ID laws in an attempt to curb illegal voting. While the controversy over the constitutional legality of such laws still rage on, McClure is concentrating on working within the state guidelines to ensure every eligible person in Georgia has the ability to register.

“While the law stands, we have to work with it,” the Powder Springs native said. “This poses a lot of challenges, and can change person to person.”

While McClure explained the processes to the new volunteer, Tom, it became apparent that it’s not as easy as many would think. Older residents from more rural areas simply have never had nor needed identification, while many others have lost them and have a hard time proving their identities to establish new ones.

“We’ve had people come in that were homeless that formerly had state IDs that were lost or stolen,” she said. “One homeless person had their ID within their belongings in a [squat residence] that was raided by the police, and all her belongings were thrown away.”

The first step to obtaining a state identification lies in obtaining a birth certificate, which has its own issues.

“You need another person to swear an affidavit that confirms you are who you say you are,” McClure said. “Another way is to verify your credit history.”

Both pose challenges, as finding people to verify your basic existence isn’t easy for everyone. For the credit report, it involves answering questions in your credit history.

“Many people are asked questions on the credit history about past residences and [things like car ownership] that they may not be able to recall off-hand,” McClure said. “If you are answering these questions online and miss one, it [often] kicks you out of the system and tells you to visit the certificate office in person.”

Even after you’ve verified yourself, other issues may come up, especially with much older citizens from rural and poor upbringings, along with those raised in foster care and the like, many not even knowing what their actual birthday is.

“One woman managed to prove her identity and obtain a birth certificate,” McClure said. “But it turns out, she was three years older than she had been previously told. She now has to go back and redo all her other identification paperwork to reflect her proper age.”

Tom took all this information in, writing notes down on his tablet as McClure continued on. The scope of the issue became apparent, as well as what is expected of volunteers looking to help these people out.

“Once we help them establish a birth certificate, we want to be there for them when they go obtain an ID,” McClure said. “Standing in line with them, helping them answer questions that can be often frustrating. We want to make sure they have their paperwork and information in order every step of the way.”

Spread the Vote is always looking for volunteers, and the need for the organization for fellow residents becomes apparent when you look at the obstacles facing many of these Georgians looking to exercise their constitutional right to vote, McClure said.

“You can tell this is a time-consuming process,” McClure said. “The more people that volunteer, the more we can properly train in every aspect from initial intake to registering, and get them out there, helping out.”

For more information on Spread the Vote, what Georgia residents need to do to be eligible to vote, and how to volunteer, visithttps://www.spreadthevote.org/georgia/ or email Fallon McClure at [email protected].