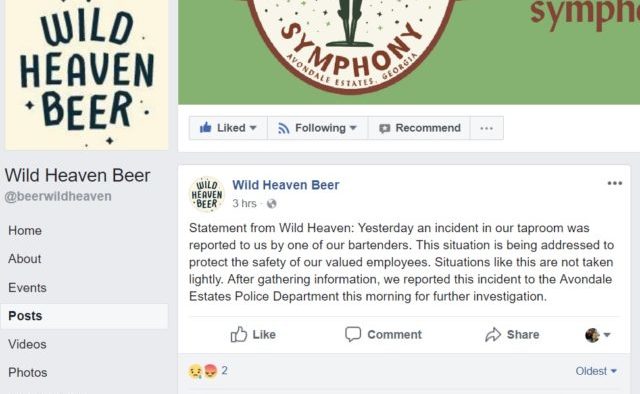 A bartender at the Wild Heaven brewery alleges he was sexually assaulted by a customer on Saturday and that the brewery’s management has been slow to respond.

Nick Purdy, one of the owners, said the company filed a police report and will ban the customer from the premises.

The employee, Dedrick Flynn, said he has also filed a police report. Decaturish has requested a copy of both police reports from the Avondale Estates Police Department. Decaturish usually does not name victims of sexual assault, but Flynn agreed to the publication of his name in this story. In a Facebook video that was being widely shared on Sunday, Flynn says the patron grabbed him by his genitals while he was working. He alleges that an investor in the company then asked him to calm down and allow the person who allegedly assaulted him to finish his drink.

Flynn said that the man told him, “I’m sorry.”

“First of all, that’s not, ‘I’m sorry.’ You don’t say sorry for stuff like that,” Flynn said. “I told him he had to leave. The investor told me to calm down, he’s gonna leave in a minute, like let him finish his beer. We get in an argument about when the dude has to leave when I get sexually assaulted?”

Decaturish is not naming the suspect unless he is formally charged by the Avondale Estates Police Department. A message sent to the accused via Facebook was not immediately returned.

In an email sent on Sunday afternoon, Purdy said, “We did file a report this morning with the [Avondale Estates Police Department] and posted a statement on our Facebook page. We are of course very distressed about this on behalf of our employee and have taken steps on his behalf including banning the alleged person involved from coming back to the brewery and reporting it to the police.”

In a post on the Wild Heaven Facebook page, the company said, “Yesterday, an incident in our taproom was reported to us by one of our bartenders. This situation is being addressed to protect the safety of our valued employees. Situations like this are not taken lightly. After gathering information, we reported this incident to the Avondale Estates Police Department this morning for further investigation.”