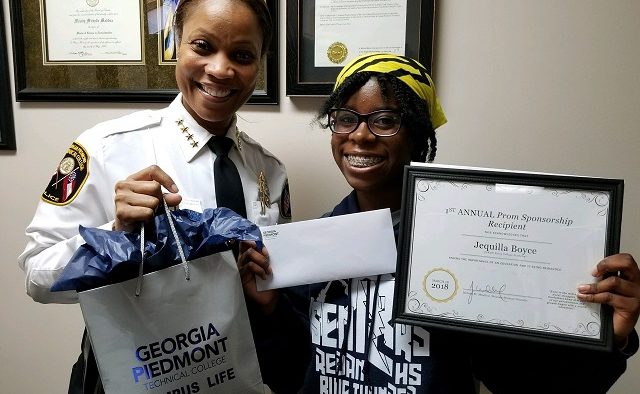 Jequilla Boyce, right, one of the essay contest winners. Photo provided to Decaturish

Local service organization Women 2 Women (W2W) has announced the winners of an essay contest for DeKalb County high school students on the topic of why furthering education is important.

Women 2 Women held the contest in preparation for prom season, with four winners receiving a $250 sponsorship to cover part of their prom expenses, according to a W2W press release.

“Everyone aspires to look their best for the high school prom.  I wanted to help with that expense at the same time promoting the need to continue their education beyond high school,” Melody Maddox, W2W’s founder, said.  “When you look good on the outside, you feel better on the inside. That’s what Women 2 Women strives to do…nurture the person from the inside in an effort encourage young people to be better citizens and get involved in their community.”

According to the release, several students from DeKalb County submitted essays. A panel of judges, including Maddox, reviewed the entries during the last week of March.

The winners were announced on April 2, with two women and two men selected to receive the sponsorship. They are:

Along with the sponsorship, each of the four students also received a gift bag provided by Georgia Piedmont Technical College in an effort to promote education beyond high school.  The ladies were encouraged to buy a dress, shoes and boutonniere for their prom experience, while the men were prompted to invest in a suit, shoes and corsage.