Dear Decaturish – Does Decatur have the strength to confront its own monument?

Dear Decaturish – Does Decatur have the strength to confront its own monument? 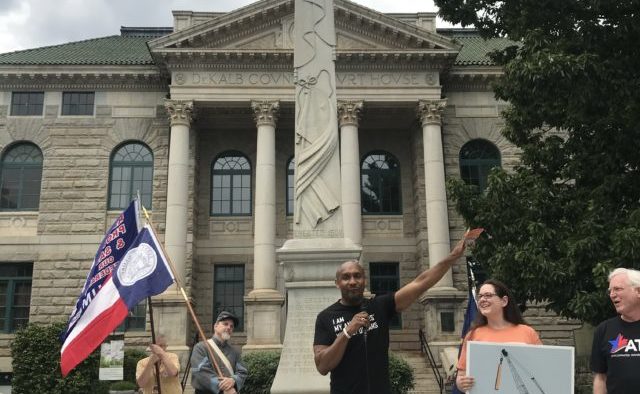 A large group gathering in Decatur on a recent Sunday to support moving the Confederate monument at the Decatur courthouse was joined by a small group of counter-protesters. Photo by Mariann Martin
Share 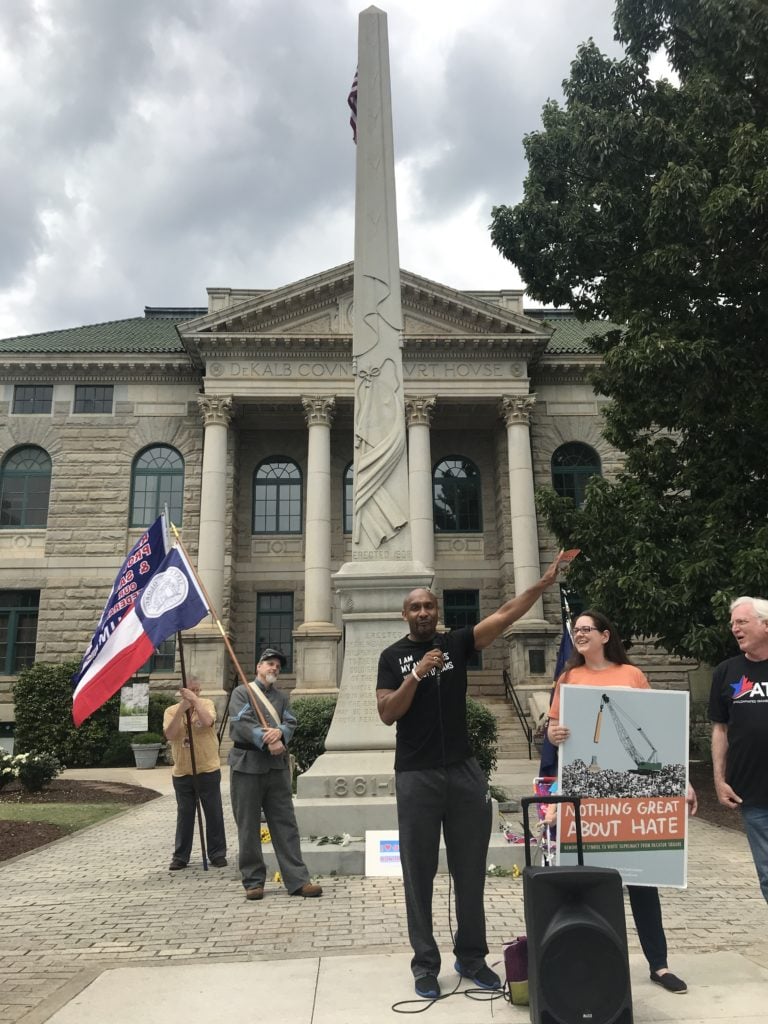 A large group gathering in Decatur on a recent Sunday to support moving the Confederate monument at the Decatur courthouse was joined by a small group of counter-protesters. Photo by Mariann Martin

The Civil War is still being fought. It can still be lost.

One way it’s being fought is through monuments.

Early in the 20th Century, groups of southerners seeking to glorify white supremacy and the “Lost Cause” built monuments in town squares around the country, including in DeKalb County, Georgia, where I live.

Stone Mountain is just the largest such monument. There are many others. One sits in front of the old county courthouse in Decatur.

When these monuments are threatened, their supporters swarm, claiming they have nothing to do with treason, or white supremacy, but are simply meant to commemorate heroes and a part of American history.

It’s hard to fight them, on behalf of an empty town square.

A first step toward understanding opened this year. The Equal Justice Initiative Museum in Montgomery, Alabama tells the story of black America, from slavery through Jim Crow, to Civil Rights and the present day.

I’m the first in my line, mother or father, to live in the South, and the horrors described are nothing less than a continuing Holocaust. I knew many survivors of Hitler’s terror growing up on Long Island, but these horrors were committed, are still being committed, against black neighbors. Rather than sentence violent racists to jail, they should be forced to go through that place, and then write about it.

After my visit I needed a break and found it a mile to the east at the State Capitol, where Jefferson Davis was sworn in as the Confederate President and where, a few feet away, Rev. Martin Luther King rallied his congregants. Dexter Avenue Baptist Church, the center of the bus boycott that launched that Victorious Cause, commands the view on the next block. Across from it, an office building carries the name of Lurleen Wallace. Inside is a stone bust of her. Her husband, George Wallace, is not mentioned in the architecture.

Fortunately, it is mentioned by Aroine Irby, a black Air Force veteran from Selma, who guided our tour through the duality of the southern thing. The ghost of Lurleen’s husband however, haunts the ground, “a pawn in the fight against the Civil Rights cause,” as Patterson Hood wrote. “Fortunately for him, the devil is also a southerner.”

Alabama has paid a fearful price for George Wallace. Its population is now half the size of Georgia’s, it’s economy even smaller. A half century after Dr. King’s death, what they’re proudest of at the “Confederate White House,” which sits just south of the Capitol, is that Alabama is now a low-wage colony for Korean car makers.

Yet all I got from Mr. Irby was pride, and a disarming sense of humor I will treasure always. His tour even had a punchline. Last year, when Sen. Richard Shelby could not bring himself to support Wallace throwback Roy Moore or his Democratic opponent, Doug Jones, he cast a write-in ballot. So did several hundred friends. The name they wrote? Aroine Irby.

After some Thai ice cream across from the corner of Zelda and Fitzgerald Road, I was ready for the real aim of my trip.

Its full name is the National Memorial for Peace and Justice.  It sits on six acres southwest of downtown. It opened in April. A new EJI Museum rises across the street. There is room on the site for additional artwork. But for now, you walk up a gravel walk, past a statue of naked, chained men and women. You walk slowly, as to gallows.

Then, at the top, you start walking down, and face them. Hundreds of steel columns, shaped as coffins. Each carries the name of a state and county, along with the names and dates of documented lynching victims. You go from stone to stone in the darkened space, seeking your home. You start to walk down, which means the stones rise up. Soon, the stones are above your head, the space as dark and silent as a tomb. At eye level, now, are stories, of men, women and children, hung across the South for no reason save skin color, sometimes burned alive, surrounded by white men, and women, who paraded around them gleefully as at a picnic.

Finally, you think, it’s over. You have reached the bottom of the well. An open door beckons.

It beckons to the greater horror. Because here, lined up alphabetically, by state and by county, are a second set of steel coffins. What you couldn’t find before is now too easy to find. It’s staring you in the face. DeKalb County, Georgia, four dates, but only two names, the other two hangings being documented but the identifies unknown.

If you’re not crying now then you have no heart, nor soul. You deserve to be forgotten as George Wallace is.

There’s a debate going on in Decatur right now. About a Confederate monument by the old courthouse, erected midway in the Jim Crow era, commemorating those who fought and the cause they fought for.

Leave it. But consider doing what thia Monument suggests. Consider taking the DeKalb County coffin and placing it opposite the Confederate monument and telling the full story.

This is your Monument, and this is your Stone. Do we have the strength to lift it, the courage to bring it home?

– Dana Blankenhorn writes a weekly column at his personal blog.