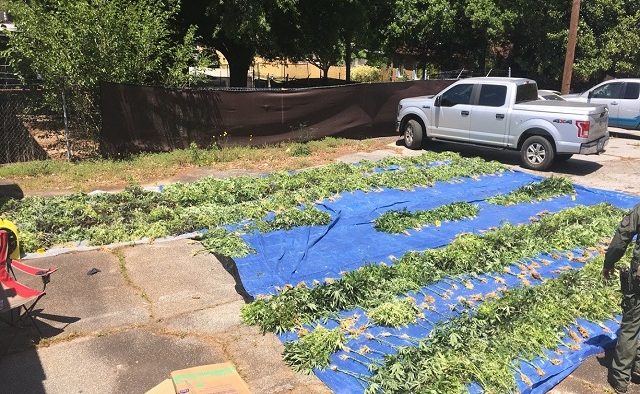 The Georgia Bureau of Investigation raided a marijuana grow operation in Avondale Estates on Tuesday, May 1.
Share

The Georgia Bureau of Investigation raided a marijuana grow operation in Avondale Estates on Tuesday, May 1.

The operation was allegedly housed at 2869 Washington Street, a warehouse. Agents had been investigating the operation for a month.

Agents found more than 400 marijuana plants. They found grow rooms with lighting and timed water systems. A large air filtration system masked the smell. There was a room for drying the plants to package for sale. Agents found an “industrial sized grinder” valued at more than $10,000. Some marijuana packaged for sale was also seized.

“Agents secured an arrest warrant for Rexrode for trafficking in marijuana,” the GBI said. “Rexrode was arrested at an address in the 3600 block of Peachtree Road NE in Atlanta. A search of the apartment found ten pounds of marijuana, cocaine, prescription pills and a device utilized in the cannabis oil extraction process. Agents also found $5,020. Rexrode is currently in the DeKalb County Jail. Additional charges in Fulton County are anticipated. Also assisting in the investigation was the Avondale Estates Police Department, Atlanta Police Department, and the Georgia National Guard Counter Drug Task Force.”