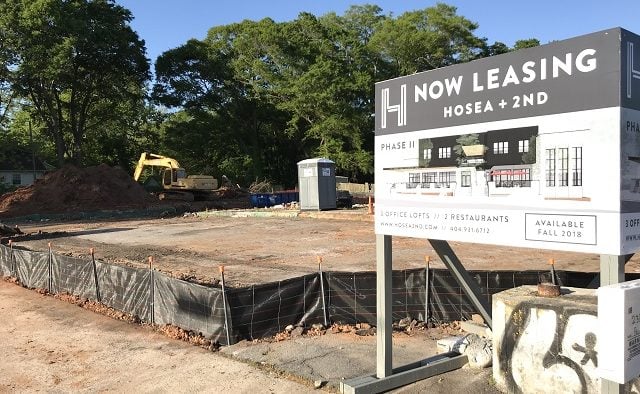 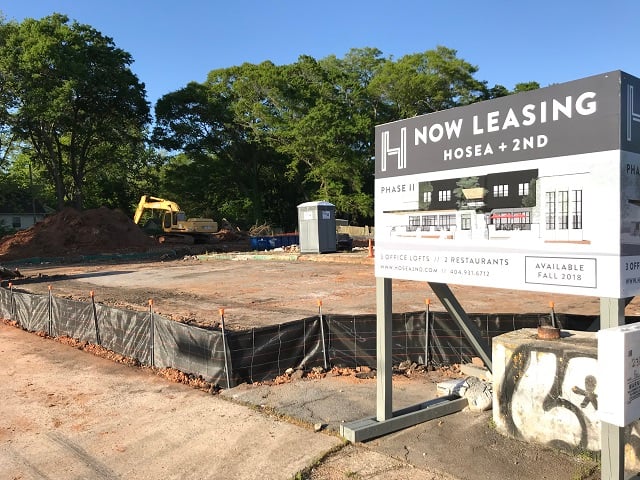 Construction of Phase 2 of the Hosea + 2nd development in East Lake is officially underway.

“Mike Nelson and Clay Harper, owners of Fellini’s Pizza and La Fonda Latina, and their development partners, Jay Martin and Nathan Bolster of ReDevStudio, announced that they have broken ground at the northeast corner of the growing intersection of Hosea L. Williams Drive and 2nd Avenue,” a press release from ReDevStudio says.

The group is planning a two-story, 7,700 square foot building. It will connect the project’s public space with the restaurant and office spaces via an open corridor that will run through the center of the building, the press release says. The company said, “With space for two new restaurants/cafés and three creative office lofts, the project will complete the third corner of the developing intersection.”

The project will serve the East Lake, Kirkwood and Oakhurst communities.

Here is a project rendering:

Martin said in a press release, “The project will deliver in December of this year. We envision Hosea + 2nd as the hub of a thriving, walkable, diverse community. We already have a great mix of community-oriented tenants who have expressed interest in Phase II.”

Tenants that have already opened at the development are Greater Good BBQ, Poor Hendrix Restaurant, Mix’D Up Burgers and Mary Hoopa’s.

The Atlanta Urban Design Commission gave Phase 1 of the project an award of excellence and in 2017 it was a finalist for an American Institute of Architects (Georgia) design award.