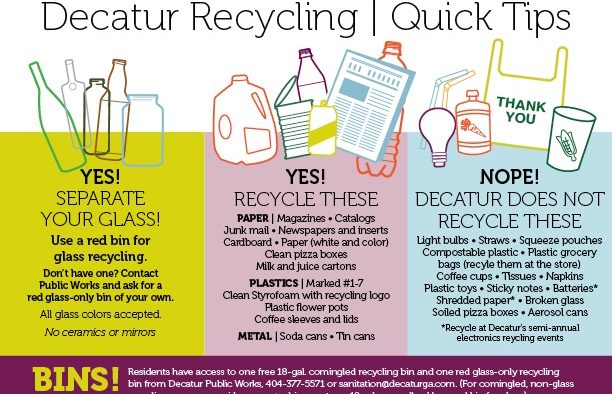 A recycling tip sheet provided by the city of Decatur
Share 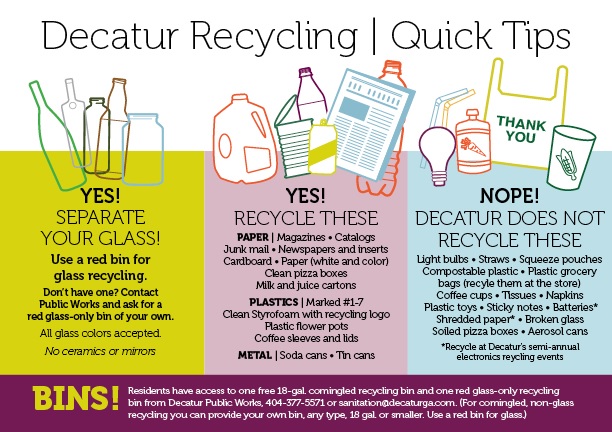 A recycling tip sheet provided by the city of Decatur

Latham Home Sanitation is ending its 10 run as the city’s contractor for recycling services.

The city decided to take over the collection of recyclables after it couldn’t reach an agreement with Latham about to cost of continuing to provide recycling collection services.

Representatives of the city and Latham both said they parted ways on good terms.

The contract change comes as China is putting pressure on the global recycling industry. According to Public Radio International, the country has stopped accepting many recycling imports, leaving many companies stuck trying to figure out what to do with the materials.

“Now we have flooded the market with recyclables in the United States with nowhere to go,” Latham Home Sanitation Vice President Rick Jarvis said.

Jarvis said the company and the city couldn’t come to term on “tipping fees,” an additional fee charged to process recyclables.

“The commodities are not worth the labor they have in it to sort it,” Jarvis said. “What they’re having to do offset it, is charge the tipping and dumping fees.”

He said the city wanted the company to continue to use Strategic while taking all the other materials to Conyers.

“We would’ve had to go all the way to Conyers, Ga,” he said. “That wasn’t going too work for us.”

The city also wanted the company to assume any liability for tipping fees if Pratt began implementing them.

“It’s boiled down to one simple thing: we didn’t want to take the liability,” Jarvis said.

“They bid the service and in that bid price they provided no contingency for any tipping fee,” he said.

The city signed a one-year contract with Pratt and will begin collecting recycling on July 2. Junger said the city will drop glass recycling at Strategic and truck the rest to Pratt. There will be no change to the current garbage collection fee for residents, he said.

“We know how to pick up garbage,” Junger said. “We’ve been picking up garbage. This is nothing new for us.”

Jarvis said his company learned a lot working for the city of Decatur, calling it a “cutting edge” city when it comes to recycling.

“They’re the No. 1 recycling city in the state of Georgia,” he said. “They are the best. Nobody can touch them.”

So what does the contract change mean for residents?

“Please be patient during the transition period,” the city wrote on its Decatur Minute blog. “If your recycling has not been picked up by 3:30 pm on your recycling collection day, please contact the Public Works Department at 404-377-5571 or [email protected]”

Co-mingled recyclables will still go in one bin, and glass will need to be placed in a  separate red recycling bin. Residents can use their existing bin if they have or can request one from Public Works.

“We ask that residents be patient with us as we transition to city staff providing recycling collection,” Junger said.