UPDATE: The annexation petition was approved in a 3-2 vote. A more detailed recap will be published on June 5. Here’s our earlier story …

The Decatur City Commission at its June 4 meeting will consider an annexation petition that could bring another mixed use development into the city.

The parcels near the Avondale MARTA station were zoned industrial, but Alliance Realty Services is planning a mixed-use project there, one that could include a Publix grocery store. The project will also include an apartment complex. The developer wants to build 289 multi-family units on the site.

During its April 16 meeting, the City Commission tabled approving a master site plan for the development and special exceptions to the zoning sought by the developer, as well as the annexation petition itself. The commission did approve the overall zoning for the project, but there were some “no” votes regarding the project during the meeting, signaling uneasiness among commissioners about approving annexation and zoning at the same time.

The project did win the support of a key stakeholder: the Decatur School Board.

The Decatur School Board recently held a work session on the proposal and determined it could potentially bring 45 to 56 students to City Schools of Decatur, far more than the attorney for the developer says the project will generate.

But the project will also bring in $750,000 more in tax revenue than it would cost to educate these students, due to the project’s retail components. The additional students would likely require building three classrooms at a cost of $2.3 million, a cost that could be spread out over 30 years.

The School Board submitted a letter of support for the annexation, stipulating that the support is for the current development plan. 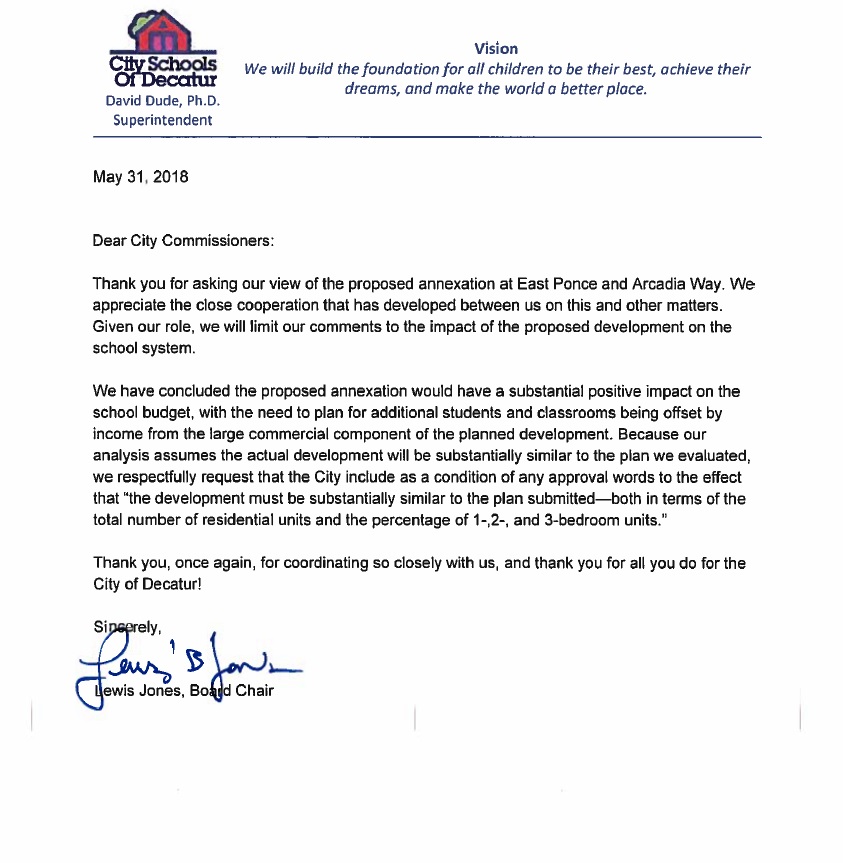 The June 4 Decatur City Commission meeting will start with a work session at 4 p.m. The regular meeting starts at 7:30 p.m. It will be held at City Hall, located at 509 North McDonough Street. All meetings are open to the public.