Decatur Police are investigating a shooting at the intersection of South Candler Street and Midway Road that sent two people to the hospital.

“On Wednesday, June 20, 2018 at approximately 5:48 pm, Decatur Police responded to a person shot at the intersection of South Candler Street and Midway Road,” Lt. Jennifer Ross said. “Upon arrival, officers located two victims who had sustained gunshot wounds while inside of a vehicle. Both victims were transported to an area hospital. One victim was pronounced dead and the other victim is being treated for non-life threatening injuries. The suspect was described as a bald black male driving a black Chrysler 200 or 300, last seen traveling southbound on South Candler Street. The identities of the victims are not being released at this time. The Decatur Police Criminal Investigations Division and the Georgia Bureau of Investigation are investigating the incident.  If you have any information about this incident, please contact the Decatur Police Department at 404/373-6551 or Crime Stoppers Greater Atlanta at 404 577-Tips (8477) and remain anonymous.”

Freelancer Diane Loupe went to the scene and sent this photo of a red Nissan being inspected by a police officer. She said a passenger window had been shot out and the vehicle has a Louisiana license plate. 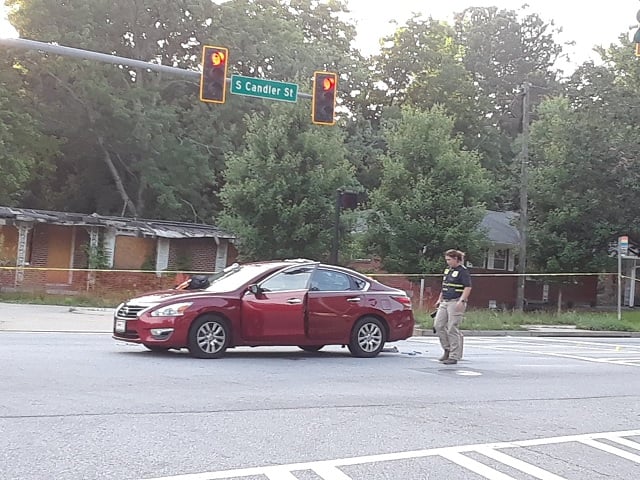 This is a developing story. More information will be published when it becomes available. If you are near the scene and have any info, please email [email protected]