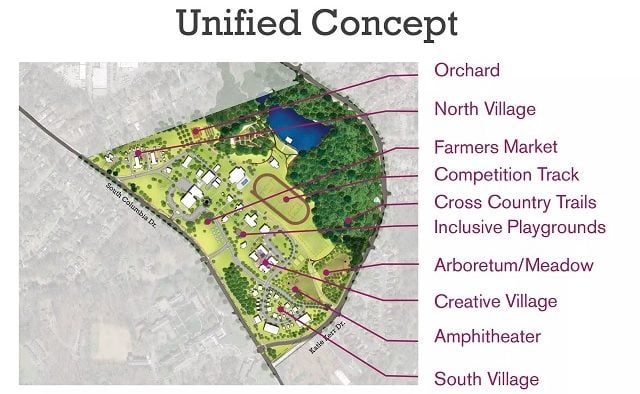 After months of discussion, a single, unified plan has finally been completed for the former United Methodist Children’s Home property in Decatur.

At a meeting and presentation last night, the city of Decatur and its consulting firm, Cooper Carry, revealed the updated plan for the 77-acre property that the city purchased last fall.

The concept integrated feedback collected on the three previous options presented in late April and from further feedback during an online survey in May to gauge community preference levels for both the designs overall and their individual pieces, the city said.

Ultimately, the plan is a combination of the three options, incorporating a greenspace, amphitheater, track and field facility and a variety of affordable housing options. The property will also become home to a new orchard, farmer’s market and arboretum among other features of the development.

A few residents have voiced disappointment in the plan already because the plan doesn’t include any of the much-discussed athletic facilities that students and parents have been asking for. While the plan features a new track and field facility, the track likely won’t be built for several years.

“This was a no-brainer for the proud tradition of Decatur athletics,” resident Jimmy Fowlkes wrote. “A perfect opportunity for the city to make necessary improvements and have an athletic facility like no other … I honestly don’t see how the athletic program can survive with such a lack of support from the community!”

Still, the city and consulting team have a lot to do before any development can take place. As part of the physical and financial plans for the project, the consulting firm expects to phase the project over a 20-year span and are still considering how to pay for it all.

Currently, while the city has included the acquisition and maintenance of the property into its budget, much of the multi-million dollar project remains unfunded.

Some of the funding will come out of future city budgets, but the city is also looking to find partnerships in order to raise money. There are several potential partners for the project, including organizations like City Schools of Decatur, the YMCA and Agnes Scott College.

Although the plan is not officially final – and there are still steps for the city to take financially and logistically – the new concept looks to be set. View the presentation and the unified plan here.