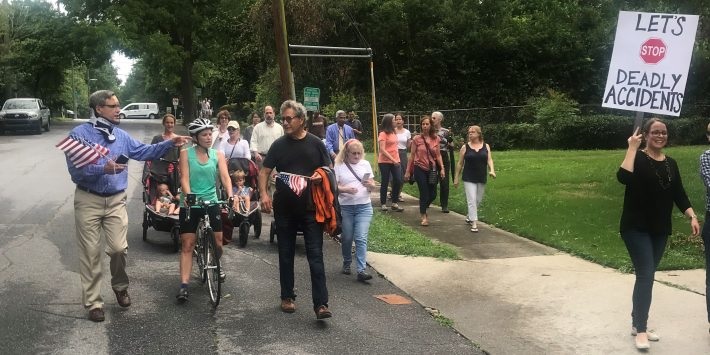 Parents, joggers, and bikers gathered near Emory University at the intersection of North Decatur and Oakdale Road to meet with DeKalb County officials to demand safer roads.

They walked to the nearby Emory campus, pushing stroller, riding bikes, and holding signs asking for better traffic control.

The residents cited cars colliding with each other, pedestrians, and bicyclists as a growing issue plaguing their neighborhoods.

Accidents at that intersection have tripled in the past three years. Even though there are sidewalks, some people who live near North Decatur still don’t feel safe.

Emily Webb has a 6-month-old daughter, and she gathered with the group to voice her concerns.

“It is alarming how fast the cars go when they’re speeding by,” Webb said. “No one seems to even slow down when they see a woman with a stroller and a dog trying to make it down the street.”

Mike St. Louis is also a resident near North Decatur Road, which sees some 15,000 vehicles a day.

He showed up in a neck brace after being hit by a truck while on his bike on a county road.

“We need a solution to slow traffic at those intersections,” St. Louis said. “That’s what we’re planning. To really ask for or demand from our county officials to make it safe for our citizens.”

Solutions to that request get complicated since the area is an historic district.

“Actually changing the configuration of the road, changing the footprint so to speak, is going to be problematic in a lot of ways,” said DeKalb County Commissioner Jeff Rader.

But Rader said commissioners will just have to work around that.

“Any improvements that we can make within the existing pavement footprint will be easier to accomplish in the short term,” he said.

Those short-term improvements can range from mini-roundabouts to narrowing lanes.

He said the plan is to start construction on those changes in the next quarter.