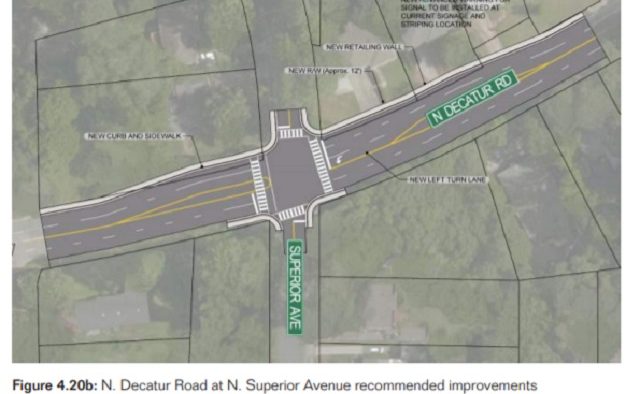 A draft of Decatur’s transportation plan identifies North Decatur Road at Superior Avenue as an intersection in need of improvement. Source: City of Decatur

One of Decatur’s most problematic intersections needs improvement, but the city has not taken any steps to make it happen.

The draft of the city’s transportation plan was released today, July 11, for public review and feedback. It lists several intersections for improvement, including North Decatur Road and Superior Avenue.

That intersection was the subject of a letter to the editor published on July 10. Lt. Jennifer Ross with the Decatur Police Department provided some context for the letter and said there have been 44 accidents at that intersection since Jan. 1, 2012.

The transportation plan, which has been in the works for months, suggests widening North Decatur Road to create a left turn lane. It calls for a new warning signal and signage, high visibility cross walks and a pedestrian refuge in the median on the west side of the intersection. Making the improvements could be a costly endeavor. It will require 12 feet of right of way and the relocation of the existing retaining wall on the northeast corner.

Other problematic intersections identified in the plan include:

The draft plan says, “These priority intersections … are not currently in any stage of development, but are recommended to be improved.”

The recommendations were based solely on observational an anecdotal evidence.

“No traffic analysis was performed as part of the scope of the [Community Transportation Plan] update,” the draft plan says. “Therefore, when these improvements move to design, it is recommended that traffic analysis be performed to validate and/or refine these recommendations.”

To see a copy of the plan, click here.

The plan will be presented at the city’s work session on July 16 at 6:30 p.m. The meeting will be held at City Hall, located at 509 N. McDonough Street and is open to the public. City commissioners will consider adopting the final draft on Aug. 6.

Click here to learn more about how to provide the city with feedback on the plan.