Local couple has run Peachtree Road Race together for 30 years

Local couple has run Peachtree Road Race together for 30 years 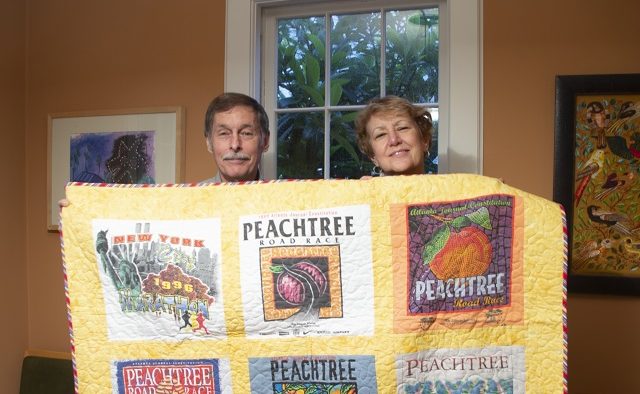 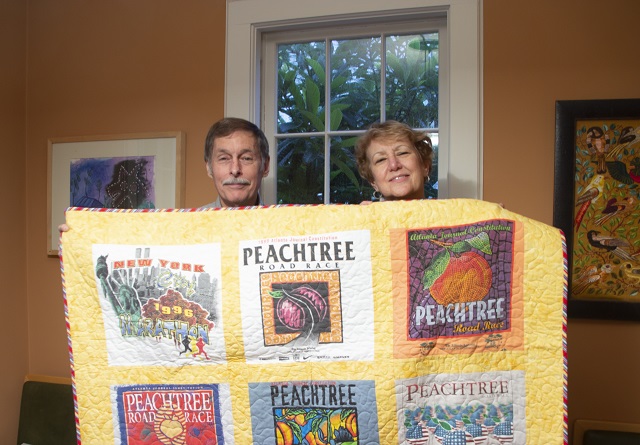 Every year on the Fourth of July, thousands of people line up in Atlanta to run the Peachtree Road Race. The 10-kilometer race sees plenty of familiar faces each year, including James Wiley and Kathy Harben, a local couple who have run the race together for almost 30 years.

Wiley, a residential architect, first started running the Peachtree Road Race in 1982 when he was in his 30s.

“I had friends that were running, and it was kind of a fun-looking thing to do, so I decided, well, I’ll give it a try,” he said, “and I’ve just been doing it ever since.”

Although Harben, the chief of media relations for the Centers for Disease Control, didn’t run the Peachtree Road Race until years later, she began running in college, where she and a friend would often run a mile or so.

A few years later, she met some other women who invited her to join a weekly Saturday morning running group. That’s where she met Wiley, who she would eventually marry in 1994.

“We’ve been doing that running group since probably around ‘81, and we still do it every Saturday morning. We’re the only ones that still run. Everybody else walks,” Wiley said, laughing.

In 1988, Harben ran her first Peachtree Road Race, and the couple has been running the race together ever since.

Outside of the Peachtree Road Race, the couple runs frequently – every Monday, Wednesday, and Saturday (with their running group), to be exact. They’ve also run the Tour deCatur, the Run With The Dogs 5K and other races.

“We don’t always run together, but it’s just a way to keep a goal, and it’s kind of a time for us to talk about what we did in our day,” Harben said. “We run through Decatur, so we see how it’s changing over time. I would bet some people in our neighborhood know us because they see us running all the time.”

Harben enjoys running because it offers a change of pace from the stress of daily life and work.

“I truly enjoy getting outside because I work all day at an office behind a computer,” she said. “It’s a good stress reducer, so if you’re thinking about something or trying to solve a problem, it’s a quiet time to think about whatever might make an issue better.”

Wiley agrees. For him, running is an opportunity to get out, stay fit and have a bit of fun, too.

“I also really like to get outside, and I’ve always been a bit competitive, so I try to win my age group every now and then,” he said. “I’ll say, the older I get, the easier it is. Running is just an opportunity for overall fitness, and it’s really good for you.”

When they run the race, the couple often runs in different waves, so they don’t run it side-by-side.

Instead, they meet at the finish line, where they sit back to listen to the live music. Then, keeping with their tradition of post-run breakfasts, they go to a brunch hosted by a friend from their running group.

“It’s really nice because all of the people we’ve known for thirty years still get together,” Harben said, “and we’re usually pretty hungry by then.”

Over the time they’ve run the race, the couple has experienced plenty of changes: modified routes, new directors and all the new racing technology. They’ve also seen the race grow from around 25,000 to 60,000 participants.

“Back when it was fewer people, you could actually try to run competitively for a time. It was sort of a benchmark, where you’d compare your times every year, and unfortunately you don’t seem to get faster the older you get,” Wiley said. “But now that there’s so many more people and it’s a much more casual thing, it’s not so much about the competitiveness of it anymore.”

Still, the pair has come back year after year. As a memento, Wiley has saved all of his numbers and shirts from the race. A fire in his old apartment destroyed his shirts from 1982 through 1989, but his running group came together to donate their shirts and recomplete his collection.

“He never wears [the shirts],” Harben said, “so they’re in very pristine condition.”

Part of the joy in the race comes from the little traditions that accompany it. Every year, the couple loves to listen to the bands that play throughout the race.

Harben also appreciates the effort that goes into making the race happen and making it easier on the runners.

“I really like to see the people who get out there and hand out water or donuts,” she said. “They kind of come along at a time when you need some motivation, and there’s so many people who put a ton of time into it.”

The race takes place on the Fourth of July holiday every year, so many runners choose to don ultra-patriotic apparel or costumes.

While neither Harben nor Wiley dress up for the race, they’ve seen some memorable costumes over the years.

“You see some of the same people along the way. For a number of years there were these two older women who were twins, and they would dress up in really patriotic outfits with lots of stuff in their hair,” Harben said. “There are a lot of people like that each year, which just makes it fun to see.”

The patriotism goes beyond the attire, though. Harben believes that the race itself exudes a strong sense of community and strength that feels patriotic itself.

“After times like 9/11 and the bombing of the Boston marathon, there were some concerns about what could happen,” she said, “but the people of Atlanta came together as a community and said, ‘you know, we’re going to keep on doing our run.’”

The excited atmosphere of the race feels infectious, too.

“As you get up to the front of the line, you hear the roar of the crowd as the wheelchair race gets going, and I think it’s just part of being that big event,” she said. “It’s just a really special way to spend the day.”

After running the race together for so many years, Wiley has no plans to quit any time soon.