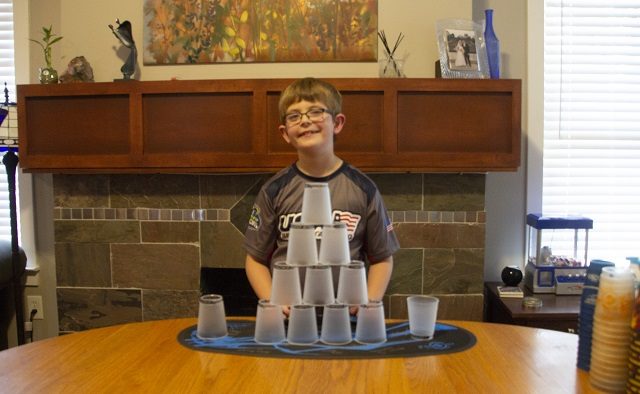 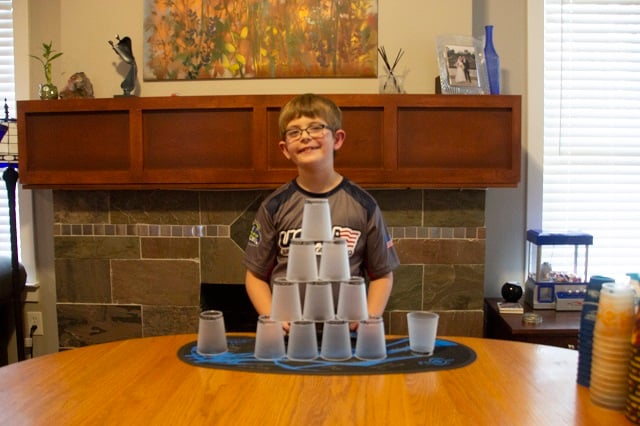 Plenty of adults can reflect on their childhood and remember playing sports like baseball, football or soccer. For Oakhurst resident and fourth-grader Sam Epstein, though, the most fun sport is a rather niche one: cup stacking.

Cup stacking first started in 1981 in California, but it has since gained an international following. In cup stacking, the goal is simple — to assemble cups in different formations and then disassemble them as quickly as possible.

Sam, a 9-year-old attending the 4/5 Academy at Fifth Avenue this fall, first started cup stacking last November after learning about the activity in his physical education class. When he first tried cup stacking, Sam said, he realized he was pretty good at it.

“I came home from school, and I was like, ‘Mom, we cup stacked at school today!’ and she asked me, ‘Did I hear you right?’” he said. “I said yeah, and I told her I was actually not bad for just starting.”

From there, his interest grew, and he decided to ask for a set of specialized cups for Christmas.

“By the time I decided it was what I really wanted, it was too late for Santa to bring them, but I decided that I wanted them badly enough to buy with my own money,” he said.

The cups weren’t a one-off item, though. Sam continued to practice throughout his winter break and on into the new year.

After a while, his mom, Lenea Epstein, thought he might be good enough to compete.

“We found out there was a competition in Atlanta, and a friend of his was also into stacking and was going,” Lenea said. “We were originally planning to go watch, but I told him that if he didn’t want to miss out and wanted to try the tournament, we would buy him more specialty cups.”

Sam took his mom up on her offer. At the competition, the World Sport Stacking Association’s (WSSA) “Hotlanta” Regional Championship in February, Sam placed 37thout of around a hundred other participants.

After the competition, Sam made a goal to make the state team. Since then, Sam has continued to practice and get better every day.

“Sometimes, he’ll practice for a half an hour or so, but he’ll often go for way longer,” Lenea said. “He’s had days where he’s even had two hours. Sometimes we have to hide the cups.”

In March, Sam competed at WSSA’s Tennessee State Championships, where he earned the ninth spot overall with an average time of 16.813 seconds. He also competed last month at the St. Louis Open Summer Fun StackFest, where he placed 12th.

Although Sam sometimes gets nervous before a competition, he finds that the environment is friendly and supportive. At each competition, he’s been able to make friends and joke around with other stackers during their off-time.

“[The competitions] are loud! In between rounds, there’s a lot of time to practice, talk, get other stackers’ autographs and more,” Lenea said. “There are a lot of practice tables set up in a school gym or hotel conference room. [The kids] all just stack and talk to each other.”

Another part of cup stacking Sam loves is how open it is to people with disabilities.

“I like the diversity a lot,” he said. “You see a lot of kids with disabilities, especially autism, who stack, and it really helps them communicate and feel comfortable. I love other sports like soccer and baseball, but I just love stacking because you can become friends with anybody, and there are so many different types of people.”

Still, Sam’s found some people don’t consider cup stacking to be a sport, which was led them to dismiss the idea altogether. Despite the teasing he and other stackers sometimes face, he stands by cup stacking as a competitive sport in every way.

“People will say, ‘Oh, that isn’t a sport because it doesn’t have movement,’” Sam said. “But cup stacking requires a lot of hand-eye coordination, and you have to use both sides of your brain. It’s also got a lot of movement involved and requires skill, and it can help you do better in school.”

Along with the mental benefits, Lenea thinks the sport offers an opportunity for kids to take a break from a computer screen and has a great community behind it.

“In this day and age of electronics, having an activity that relaxes the brain and helps focus without screens is great,” she said. “Stackers are typically just good kids with good parents. The kids and parents become close friends regardless of how well they stack.”

At some competitions, Lenea’s even participated herself. She and Sam sometimes compete as a duo for joint parent-child competitions, but she’s also gone solo and has won a few medals.

Despite beginning less than a year ago, Sam’s practice has already begun to pay off. In Georgia alone, he’s ranked 24thfor cup stacking, and he wants to keep getting better.

Next week, Sam will head to Iowa for the Junior Olympic Games Sport Stacking Championships, for which he qualified to join the state team.

“I’m really, really excited to go,” Sam said. “I’m really proud of myself for sticking with it and for getting to be so good, but also just for trying to do something new.”