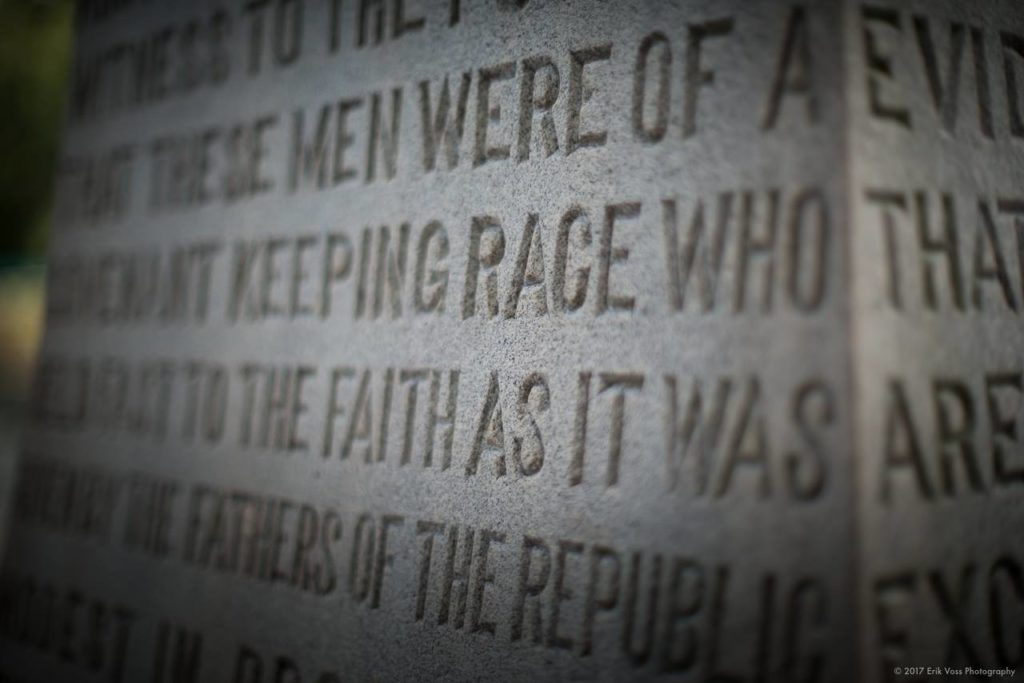 In most cases, Confederate Monuments have existed well over 100 years with most all over 75 years.  In this case, 110 years.  These were raised primarily in honor of the local veterans who never returned home as most say “Confederate Dead” on them. Many have funeral symbols incorporated into them such as the cut off stump or log symbolizing a life cut short. Clearly, these monuments are community memorials. Other communities have chosen to honor the politicians and generals of the Confederacy during the post-war Monument Movement.  Before 1877, many Confederate monuments were located in the cemeteries, and post-1877 they began to appear in public spaces.

The Monument Movement was not a Southern movement. It was a national movement as Northern states placed monuments to those that “Defended the Union” or “Preserved the Union” and their generals.  These occurred simultaneously to honor those that served. The Union monuments went up in public spaces from the beginning. The memorials served as a healing process of the nation. In both cases, ladies associations, monument associations, and veterans raised funds for the monuments. Union veterans, organized as the Grand Army of the Republic, were present and even spoke at many Confederate Monument dedications. In the case of the monument on Decatur Square, the Confederate Memorial Association of DeKalb took the lead.

Monument inscriptions vary from Spartanburg, South Carolina’s to “teach our children’s children to the honor the memory and the heroic deeds in the Southern soldier who fought for his rights granted to him under the Constitution” to Carroll County, Georgia’s lines from “How Sleep the Brave” (1757) by William Collins, an English poet.

The Dekalb Confederate Monument describes that “these men where a covenant keeping race who held fast to the faith as it was given by the Fathers of the Republic.” These words reflect the belief by the next generation who installed the monument to the Confederate Veterans that they were upholding the intentions of the Constitution laid out by the Founding Fathers. One Decaturish letter by Brian Kammer chose to emphasize “race” inscribed on the monument in the argument against the monument. Meriam-Webster online offers 5 definitions of race, none of which involve skin color. Clearly by these choices the “set course or duration of time” would apply here to the monuments’ statement.  Thus, this monument is to the “covenant keeping the course (of the Constitution).” Clearly, space on the memorial made the choice of wording very selective and intentional.

The interpretation of the Constitution was one of the multiple causes of the war. In the 19th century, one question was could a state that voluntarily joined a union leave it. The Constitution did not address this and took a war to answer the question.

As for traitors, the 19th-century citizen generally considered themselves first as a state citizen then as a national citizen. Lee, considering himself a Virginian, notably went with Virginia along with many officers in the US Army before the war left to join their states. Even the immediate past US Vice Present Breckenridge was a Confederate general. In the end, President Jefferson Davis was held for treason, but never put on trial.  The fear, even from Supreme Court justices, was if such a charge made it to the court that secession could be declared constitutional – thus overturning the result of the war.

Monuments to the Union side are just as valuable, and, when appropriate, might be in similar locales to Confederate Monuments. However, monuments should not have to have a counterpoint of view. Some have suggested placing ‘Northern figures like Lincoln and heroes like Harriet Tubman’ around the monument for balance.

In proposing this, should monuments to Lincoln be countered with Confederate Monuments? Should Lincoln’s 1858 quotes be placed for context to put him in context as the typical man of the 19th-century?

We as Americans should condemn white supremacy. However, since 2015 the racists are rising for a war just as Dylann Roof hoped to provoke with his murders. Sadly, the liberals are fulfilling it by attacking American cultural artifacts of remembrance, inaccurately putting presentism of meaning into historical resources. As the monuments fall, the nation continues to fracture. Instead of destroying monuments it would be better to build monuments and expand the story. The veterans themselves did much better at unifying.

That’s what Charleston, South Carolina did. A monument was placed in a park to the slave revolt leader Denmark Vesey – in 1822 he was a criminal and hanged. Installed in 2014, before Roof’s shooting, some thought him as a hero. No matter the view of Vesey as hero or villain, he was an influence on history. His monument attests to that.

As for Kammer’s argument that “There are no makers or aids by the monument explaining the context for what it was erected.” There is no need to be; it is literally written in stone by the community who placed it there. The Jim Crow argument that it touted by those that oppose the monuments is a fallacy. The monuments on both sides clearly state what they were for and to argue otherwise is neglecting the historical record.

As we continue down the Monument Removal path, Dylann Roof wins, and America loses.