A letter from the Georgia Department of Public Health issued to Decatur High School students this week said that there was a reported case of pertussis, commonly known as whooping cough, at the school.

The letter was sent to parents on Aug. 21. A spokesperson for the Department of Public Health confirmed the letter was delivered to school officials on Aug. 16.

The letter reads, in part, “If your child develops a cold and cough symptoms between now and Aug. 17, talk to your child’s doctor without delay.”

Department of Public Health Communications Director Nancy Nydam said she has not heard of any other cases of Decatur High students being diagnosed with whooping cough.

“In this case there was concern because this individual had been at band camp,” she said. “We contacted the school, they asked us to draft a letter which we did, that letter was sent to the school on [Aug. 16].”

Decatur High Principal Arlethea Williams said the letter was supposed to go out on Aug. 17.

In the Aug. 21 email to parents, Williams said:

It was brought to our attention that a band student was diagnosed with pertussis (whooping cough) while attending band camp this summer.  The diagnosis was delayed due to the rarity of whooping cough in teenage children.  Thankfully, the persistence of the parent encouraged the medical professionals to consider this diagnosis as a possibility.

According to the Centers for Disease Control, 10,000 to 40,000 cases of whooping cough are reported in the United States each year causing up to 20 deaths. Early symptoms can last one to two weeks and include:

– Low-grade fever (generally minimal throughout the course of the disease)

– Apnea – a pause in breathing (in babies)

After one to two weeks, symptoms include:

– Paroxysms (fits) of many, rapid coughs followed by a high-pitched “whoop” sound

– Vomiting (throwing up) during or after coughing fits

“Coughing fits generally become more common and bad as the illness continues, and can occur more often at night,” the CDC says. “The coughing fits can go on for up to 10 weeks or more.”

Nydam said there’s often a delay in reporting cases of whooping cough to the Department of Public Health.

“There tends to be a lag time for reporting to us,” Nydam said. “If an individual is sick, they go to the doctor, they run a test, a lab tests those results and they get eventually reported to DPH.”

Nydam said she could not disclose whether or not the student had been vaccinated, but the CDC says a vaccine is not a guarantee that someone won’t contract the disease.

“Pertussis vaccines are effective, but not perfect,” the CDC says. “They typically offer good levels of protection within the first two years after getting the vaccine, but then protection decreases over time. Public health experts call this ‘waning immunity.’ Similarly, natural infection may also only protect you for a few years.”

Vaccines for whooping cough start in infancy but because the effect wanes over time, periodic boosters are needed. CDC recommends that children receive a booster of the vaccine when they are 11 to 12 years old.

Before the vaccine was available in the 1940s, there were 200,000 cases reported every year.

“The Unites States’ last peak year nationally was in 2012, when state health departments reported 48,277 cases of pertussis to CDC,” the CDC says. “Before the 2012 peak, the United States also had a peak year in 2010, when state health departments reported more than 27,000 cases. CDC does not completely understand this pattern.  Therefore, it’s important that everyone is up to date with their recommended pertussis vaccines. If it weren’t for vaccines, CDC would see many more cases of pertussis.”

The CDC reports that since the early 1980s, there’s been “an overall trend of an increase in reported pertussis cases.”

“Pertussis is naturally cyclic in nature, with peaks in disease every three to five years,” the CDC says. “But for the past few decades, peaks got higher and overall case counts went up. There are several reasons that help explain why CDC is seeing more cases as of late.”

“Even though children who haven’t received DTaP vaccines are at least eight times more likely to get pertussis than children who received all five recommended doses of DTaP, they are not the driving force behind the large scale outbreaks or epidemics,” the CDC says. “However, their parents are putting them at greater risk of getting a serious pertussis infection and then possibly spreading it to other family or community members.”

People visiting from other countries are not to blame either, CDC says.

“We often see people blaming pertussis outbreaks on people coming to the United States from other countries,” the CDC says. “This is not the case. The United States never eliminated pertussis like measles or polio, so there’s always the chance for it to get into a community. Plus, every country vaccinates against pertussis.”

Here is a copy of the notification letter sent to parents: 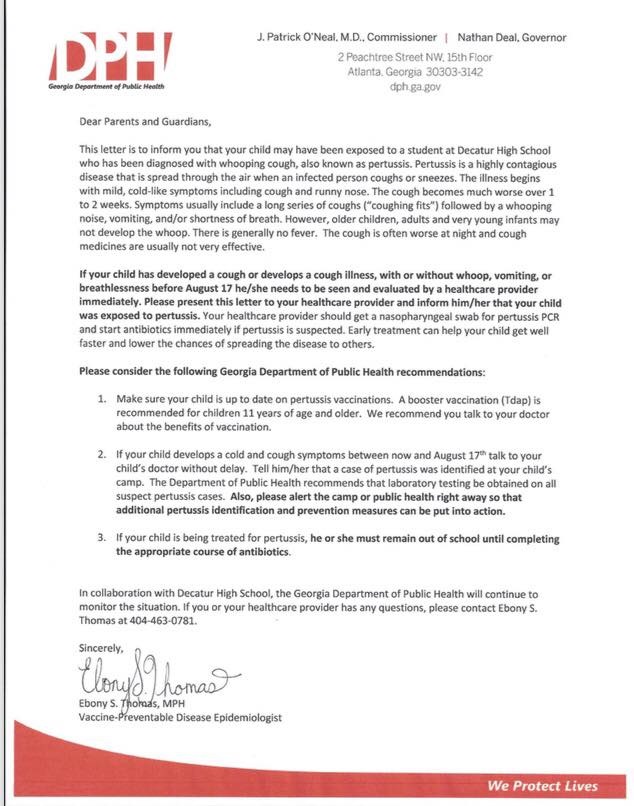