DeKalb County grows by 10,600 people within the last year

DeKalb County grows by 10,600 people within the last year

The Atlanta Regional Commission said that’s the biggest single-year growth for DeKalb since the end of the Great Recession in 2010. 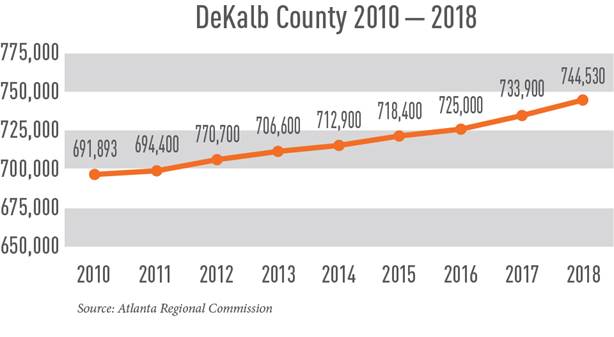 The ARC reports that the 10-county Atlanta region grew by 75,800 people over the same period, making it the second largest increase since the recession ended.

“The region’s growth was down slightly from a year earlier, when population increased by 78,300,” the ARC reported. “The Atlanta region is now home to 4,555,900 people, more than that of 25 states.”

DeKalb County CEO Mike Thurmond said the new report shows that DeKalb County is a desirable place to live and do business.

“DeKalb County is becoming the preferred location for many residents and businesses,” Thurmond said in a press release. “We have gotten our fiscal house in order and made significant investments to improve county services, governance and accountability.”