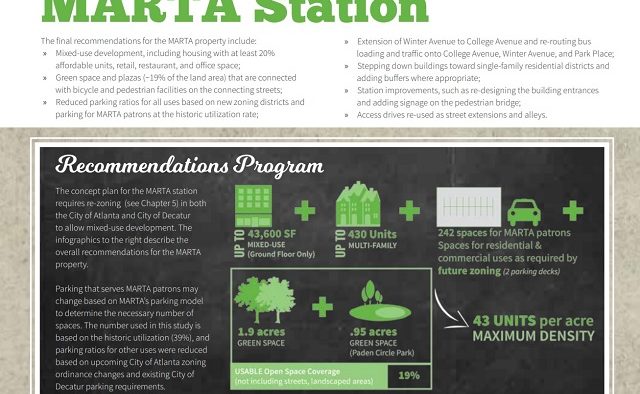 A plan that could shape the future of the East Lake MARTA station and an annexation petition tied to a storage facility development will be on the Decatur City Commission’s Aug. 20 agenda.

The meeting begins at 7:30 p.m. and will be held at City Hall, located at 509 North McDonough Street. All meetings are open to the public. To view the agenda, click here.

The East Lake MARTA LCI Study behind the redevelopment plan has been ongoing for about a year. Most of the study cost was funded with a grant, with the rest divided among the city of Decatur, the city of Atlanta and MARTA.

According to the results of the study, there would be space for 430 multifamily housing units and 43,600 square feet of space for commercial businesses on the ground floor. At least 20 percent of the units will have to be “affordable” housing. There will be almost three acres of green space. 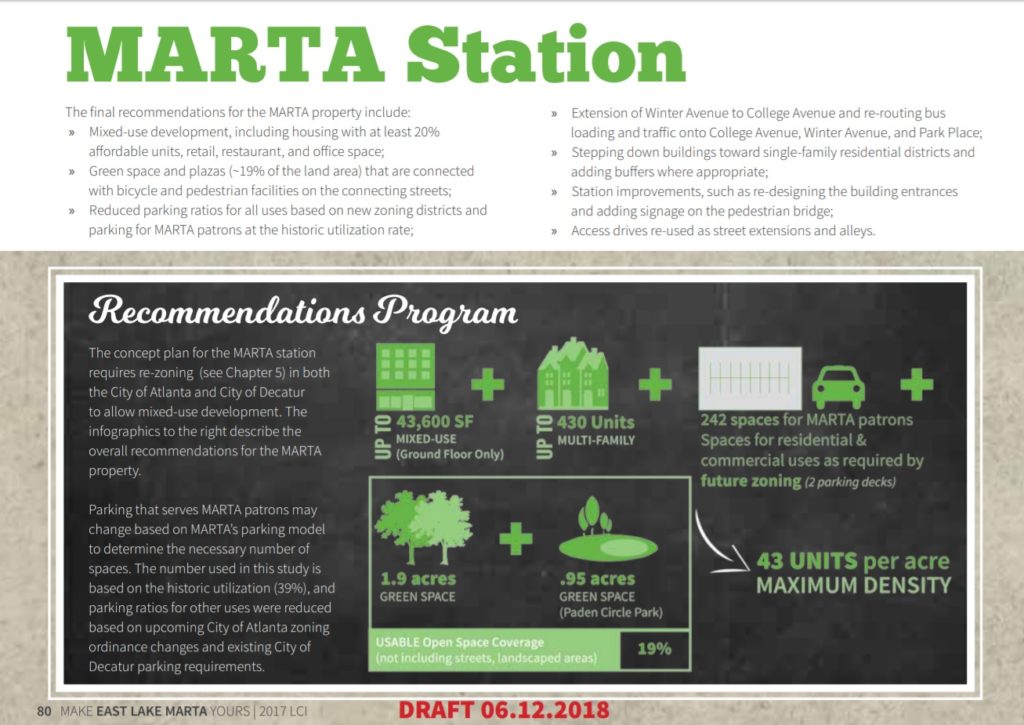 A summary of the recommendations in the East Lake MARTA LCI study. Click to enlarge.

The initial plan was revised based on neighborhood feedback. Some of the changes include limiting the height of buildings, altering the final timeline and reconsidering traffic control in the area. For example, an earlier draft of the plan indicated the plan would allow for five-story buildings. Now the buildings are limited to three to four stories. A fifth floor would only be allowed as a bonus if the developer wanted to make 30 percent of the units affordable.

“This allowance, were it to be pursued, would be restricted solely to property adjacent to the West College Avenue corridor and would require subsequent public hearings for community consideration,” the city’s DecaturNext website says. “Otherwise, MARTA’s formal policy is a minimum 20 percent affordable units, which is reflected in the LCI Study.”

For a full recap of the changes and to view a copy of the study itself, click here.

Once the City Commission approves the plan, it would be up to MARTA to create a Request for Proposal to kick start the development process. The RFP could be released within one to three years of following the completion of the LCI study, and actual development could occur within three to five years. That’s a best estimate, and other factors – like a downturn in the real estate market – could delay any development at the site.

– The Planning Commission recommended denial of the other big item on the Aug. 20 agenda, a planned storage facility tied to an annexation proposal.

Stein Investment Group wants to build a self-storage facility on Clairmont Road near the YMCA, which would require changing the zoning from residential to commercial and annexing land at 1121 and 1123 Clairmont Road into the city limits. At its June 12 meeting, the Planning Commission shot the idea down, saying the rezoning is a major change and a precedent setting one.

There’s significant community opposition to the idea as well.

One of the residents opposed to the project, Jan Amann Rooney, said, “Residents are urging the City Commission to recognize the inconsistency of this project with the City of Decatur’s stated land use goals in the Decatur 360 plan which states that the historic land use and zoning policies adopted by past City Commissioners were designed to protect, preserve, and enhance the City’s residential neighborhoods and to limit commercial development to existing commercial areas.”