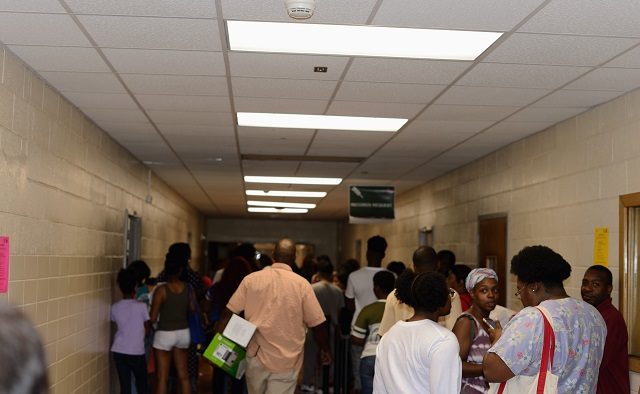 Parents waited for hours in registration line at DeKalb School of the Arts on the first day of school, Aug. 6. Photo by Dan Whisenhunt
Share

In addition to implementing a new online registration system, the county schools made DeKalb School of the Arts — the old Avondale High School — the district’s new dedicated registration site. It was set up to help parents who were unable to access the internet, but other parents went there after running into problems with the registration site. In prior years, parents enrolled their children at the school they planned to attend.

District spokesperson Andre Riley told Decaturish, “The goal is to process folks as fast as we can. This process has had its hiccups, but we’re working through it.”

Rochelle Carter, who arrived at 11 a.m. to enroll her children finally gave up before 3 p.m. She had no trouble getting one child enrolled in middle school, but her two elementary school students were another matter. While she waited, she said some cars were towed for parking illegally near the school.

Another parent who left around the same time as Carter said she’d been there for “six and a half hours.”

“This is ridiculous,” said the parent, who declined to give her name.

Carter is new to DeKalb County School system and new student enrollment appeared to be the task that tripped parents up.

Sarah Kuhns has three other children enrolled in DeKalb County Schools. When she went to enroll her youngest in kindergarten at Laurel Ridge Elementary, she started running into problems. She thought she’d completed all the steps online, but the application was still processing. She was missing part of some paperwork, it turned out.

In the past, she said, she could take her kid to school and they’d let them start attending while giving her a 30 day grace period to get the documents they need.

She was able to get her kid into school on the first day back, Aug. 6, but only because she knew the staff there and they knew her child had a way to get home. She doesn’t know how long she’ll be able do that.

“They told me it’s temporary until they get his application online,” Kuhns said. “I don’t know what’s going to happen with him.”

Not everyone got to go to school. Carter’s other children were unable to attend school on the first day. 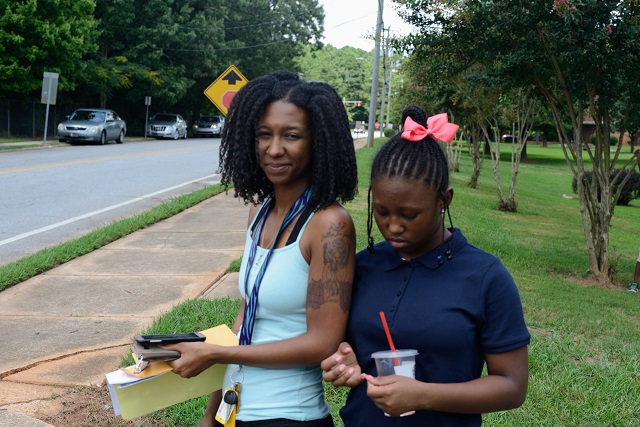 Rochelle Carter and her daughter Iyana, a 5th grader, wait for an Uber driver at the DeKalb School of the Arts. She tried to register her children on Aug. 6 but had to leave before she could complete the process. Photo by Dan Whisenhunt

Kuhns waited in line for several hours on Monday – from 9:30 a.m. .to noon – before finally giving up.

It didn’t help that Monday was a hot summer day and parents had to wait outside for an hour or more before getting to the air conditioned part of the line inside the school.

“It took 45 minutes to an hour to get inside the school from the line that was there,” Kuhns said.

There’s only one document Kuhns needs to upload to complete the registration process for her youngest child, but it had to be done on-site, she said. Some parents thought they had registered successfully online, but were mistaken.

In an emailed statement, the county schools said that many parents misunderstood the online application process.

“Some parents were under the impression that once the application was submitted, that was it,” the DeKalb County School System said in the email. “The registration process involves submitting the application, a verification process to ensure that the correct documents are submitted and then the actual enrollment. In addition, processing online is just one step. The information submitted goes through a very thorough process to make sure we have the information required to legally accept the student. We have a large influx the week before school and the week of school.”

Following the publication of this story, DeKalb County Schools provided additional information about its plan to help parents who are having trouble enrolling their children:

The primary mandate of our enrollment process is to get students in the classroom as soon as possible so they can learn. The change to an online registration method and the reduction to a single physical registration location has been beneficial for many families, as evidenced by the thousands of students that attended school today. We do recognize that some families were unable to take advantage of registering early. Our data shows that several hundred applications were received online since Aug. 3, causing a large influx of applicants.

DCSD has taken these additional steps to help all students get into school as soon as possible, including:

DCSD is working closely and diligently with any parent facing challenges with enrollment and doing all we can to remove barriers and get students in the classroom as soon as we can.