City of Decatur plans to increase the cost of metered parking, enforce limit after 6 p.m.

City of Decatur plans to increase the cost of metered parking, enforce limit after 6 p.m. 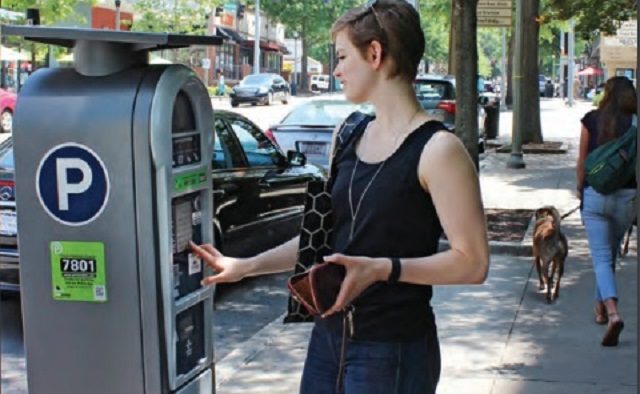 The city of Decatur has plans to increase the parking rate for city-controlled metered parking – mostly on-street – from $2 per hour to $3 per hour.

Parking will be $3 an hour from 8 a.m. to 6 p.m. Monday through Saturday. The city also will enforce the two hour parking limit after 6 p.m., a city budget document says. That means if you park at 5:30 p.m. and stay until 8:30 p.m., you are in violation of the two hour limit and will receive a parking ticket.

The city intends to award a contract to SPPlus Parking to help with parking management and enforcement.

“The City Commission did approve the contracting arrangement and the increased hourly rate and additional hours for enforcement of the two hour limit,” City Manager Peggy Merriss said. “It has not been implemented yet.”

“We currently have a parking management contract with SPPlus Parking for the management of the conference center parking deck and for consultant services related to on-street parking,” Menne said. “They will be providing part-time on-street parking enforcement through an addendum to that contract. Roll out of this change and other approved recommendations will be implemented over the next few months and will include a public information and education component.

“The purpose of this staffing change was to provide more consistent scheduling coverage and provide additional staffing throughout the downtown area during evenings and weekends. Our parking program staff provide an important ambassador role and visible public presence in addition to assuring that on-street parking is managed effectively. They give directions, answer questions and provide extra eyes and ears on the street in addition to making sure that short-term, on-street parking spaces  turn-over and are available for customers and clients of local businesses.”

Menne said the goal of enforcement after 6 p.m. is to encourage people to free up space on the street.

“Our goal isn’t to punish people,” she said. “Our goal is to encourage more turn over and availability of the on-street spaces and influence those who wish to stay longer to park in adjacent parking decks, all of which have plenty of available parking spaces after 5 p.m. and are comparably priced.”

Free parking in Decatur is becoming harder to find. Souper Jenny recently announced plans to relocate due to a lack of parking. It’s not the first business to do so. Twist ‘n’ Scoot left the city in 2014 for the same reason. When Sawicki’s Meat Seafood & More left the city in 2016, parking was a factor in that decision.

Decatur has a combination of metered on-street parking and paid lots. Some local businesses validate parking at nearby parking decks. Aggressive booting at free lots that serve businesses in downtown Decatur has deterred people who would use them to park and walk to other businesses in downtown Decatur. The booting became so aggressive that the City Commission in 2016 had to step in and pass new regulations to curtail some of the more predatory parking enforcement practices.

Editor’s note: Several readers had questions about the intent of the city’s new policy. Decaturish has followed up with city officials to clarify how the city intends to enforce the two hour limit after 6 p.m. Here is how the new parking rules are described in a city budget document:

The 2018-2019 Proposed Budget Estimates anticipate reorganizing parking management services by contracting some of the parking management operations and staffing. In addition, it is recommended that the City Commission approve increasing the parking rate from $2 per hour to $3 per hour for metered parking Monday-Saturday, 8:00 am – 6:00 pm and allowing enforcement of the two hour limit after 6:00 pm.

Editor’s note: An earlier version of this story said the contract had been awarded. The city manager later clarified that the City Commission approved the proposal to contract out additional parking services. The parking contract itself will be considered at the Sept. 17 City Commission meeting.