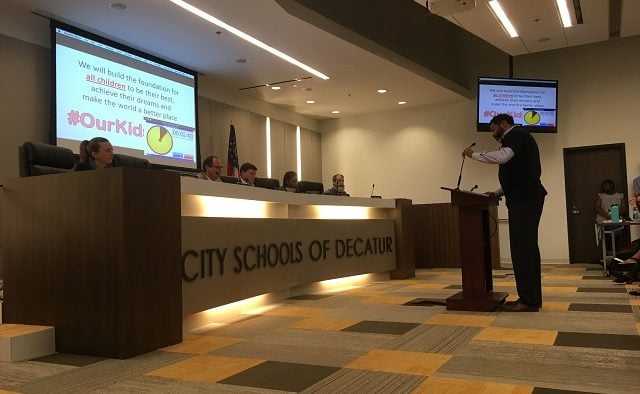 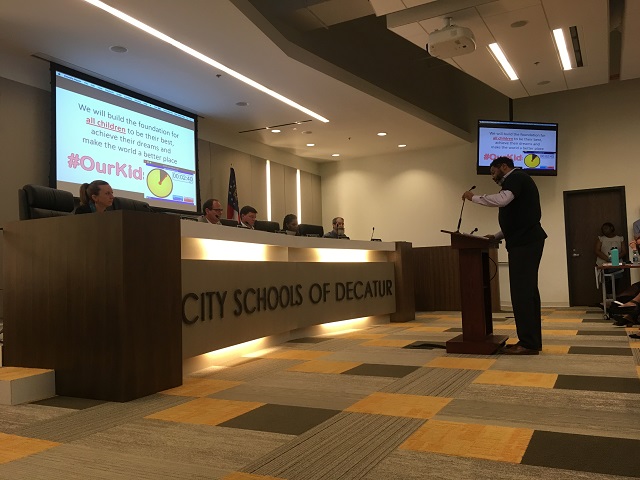 Michael Davis with the Beacon Hill Black Alliance for Human Rights speaks during the Sept. 11 Decatur School Board meeting. Photo by Sara Amis.

City Schools of Decatur has a plan to address racial disparities in disciplinary action, academics, and extracurricular activities.

Parents and students from the Beacon Hill Black Alliance for Human Rights say the plan is not enough.

“We have met for two years and attended every meeting we have been asked to, but our children still suffer. Enough is enough. We are demanding an immediate change,” said Deborah Mitchell, Co-Chair of Beacon Hill’s Education Committee, in a statement released prior to the meeting.

Since the issue was raised two years ago, City Schools of Decatur has hired an equity director and commissioned a study conducted by Indiana firm Thomas P. Miller and Associates. The results of the study were released during the summer, confirming earlier reports that there were significant gaps in student achievement and student discipline at CSD.

The needs assessment recommended regular equity-focused training opportunities, adjustments in resource allocation, a review of practices and policies, and expansion of hiring practices to ensure diversity.

During the Sept. 11 meeting, CSD Equity Director Lillie Huddleston talked about actions the district had already taken, including equity training for school administrators, and provided a timeline of additional actions through 2019.

In a group statement read during the public comment period, members of the Beacon Hill Black Alliance for Human Rights emphasized “our renewed determination to wait no longer for the change our children can feel and experience immediately.”

The statement included a list of demands, among which were an end to out-of-school suspensions for K-5 students and the establishment of a grievance process to address ongoing incidents.

The Alliance set a deadline of 30 days for “a clear timetable to address these demands,” after which “we are prepared to engage in non-violent direct action.”

“My family chose to live in a community that we came here thinking was so open to diversity,” said Lilia Ramirez. “My children have faced discrimination from teachers, from other children, and because there is a lack of a grievance process, generally the underlying answer they have gotten to is ‘we just have to make it through until we get out of here.’ That’s not OK. Our kids need to have a way to speak up for themselves.”

Board members were generally receptive. Board Chair Lewis Jones called the comments and statement “constructive” and “helpful.”

Board Vice Chair Tasha White said, “I have felt the urgency for a long time. I appreciate that we are at this place where we can’t wait.”

Board member Garrett Goebel acknowledged that, “Change from the governance level is often painfully slow.”

Superintendant David Dude read from a blog post he had written, in which he cautioned that “failure to reach the goal of transformational change is much more common than success.”

According to the district’s research, no school district has successfully eliminated race-based disparities but Dude wrote, “we fully intend to make City Schools of Decatur the first.”

Lily Pettus, with the Beacon Hill Black Alliance for Human Rights, during the meeting spoke of her long participation as a volunteer in the school district.