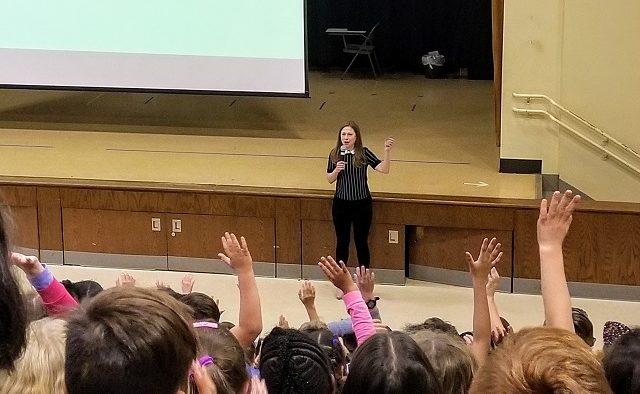 The book highlights the work of children across the country who have taken action to address problems in their communities and beyond.

In her talk, Clinton focused on four: Virginia’s Isaiah Britt, who, as a 7-year-old, raised money to provide all of the schools in Flint, Michigan, with hand sanitizer; 11-year-old Kheris Rogers, who created the fashion label, Flexin’ in My Complexion, with her sister after experiencing bullying and racism at her school; Christian Bucks, who spearheaded the effort to get his school system to install Buddy Benches on playgrounds to encourage students to include others at recess; and Devin and Roldan Kramer, two brothers who started a project to breed tadpoles after noticing an increase in mosquitoes in their neighborhood following the draining of a nearby pond.

But it was the admission that she had been a victim of bullying as a young child that resonated the most with the fourth and fifth graders in attendance.

Clinton took questions from the audience, but her representatives declined a request from Decaturish for an interview after her presentation.

During question-and-answer session with students, the author recalled being shut inside a locker by older boys when she was in second grade in Arkansas.

“I didn’t tell anyone after I was let out,” she said. “I remember feeling so ashamed. Like, what was wrong with me that someone would put me in a locker?”

It wasn’t until much later that she realized that bullying is never about the person being attacked, but the insecurity and need for bullies to feel powerful over someone who is vulnerable, she added.

Responding to the student’s question about what to do if they were being bullied, she advised them to always tell a trusted adult and their friends, and to stand up to bullies “in a way that is safe for you to do so.”

“I want for all children to know that it is brave to ask for help when you need it,” she told the group.

Another student wondered, “What if you are bullied by an adult?”

Clinton related that she also experienced bullying by adults during her father’s 1991 campaign for the presidency.

“I was 11 years old. I had frizzy hair and braces and I sometimes wore glasses. And lots of people, lots of grownups, made fun of my appearance,” she related. “There were skits on Saturday Night Live. Conservative talk radio hosts said that if Bill Clinton wins the election, the Clintons will take their cat, Socks—we had a cat named Socks—and their dog, Chelsea, to the White House.”

Although the comments hurt her feelings, by that time she was aware that adults who would mock a child were deeply unhappy and disturbed people, she says.

When she was younger, she just tried to ignore the bullying and mean comments and hoped they would go away, she added. She also looked the other way when others were bullied, because she didn’t know what to do about it.