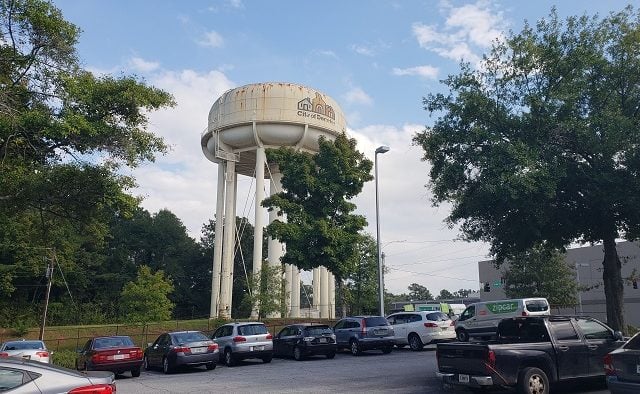 The county plans to tear this water tower down starting Oct. 14, 2019. Photo by Dan Whisenhunt
Share The county plans to tear this water tower down by 2020. Photo by Dan Whisenhunt

A water tower by the East Lake MARTA station on West Howard Avenue bears the city of Decatur logo.

It marks the gateway into the city limits. But after standing for more than 80 years, the water tower has outlived its usefulness. DeKalb County, which owns the tower, plans to remove it by 2020 “due to its age and small size.”

The tower, speckled with rust, is no longer in use, according to city officials.

“It would guess the one thing about keeping it would be the deferred maintenance and upkeep,” Powers said. “Even if it’s a piece of steel with nothing in it, you’ve got to constantly paint it, constantly maintain it. I don’t know if that’s the best use of our resources.”

The 500,000-gallon tower does have a history. Whether that history rises to the level of preservation is another question.

It was erected around 1935, one of many New Deal-era projects. Scott Candler was the chair of the City Commission at the time, and there’s a plaque at the base of the tower noting the time of its construction. A plaque at the base of the Decatur water tower. Photo by Dan Whisenhunt

Deputy City Manager Hugh Saxon, who has worked for Decatur since 1977, said the city of Decatur owned the water and sewer system when the tower was built. The county bought the tower in the 1970s, he said.

“It was a water storage tank,” Saxon said. “Those things are primarily used to provide pressure for fire fighting purposes so that there would be pressure in the municipal water mains to push water out during a fire emergency.”

Saxon said the county painted the Decatur logo on the tower in the 1990s before the 1996 Summer Olympics.

Former Mayor Bill Floyd said, “We asked them to put that emblem on there — the Decatur emblem — when they were repainting it. It’s probably been 20 years ago.”

Floyd said he doesn’t have any sentimental attachment to the tower but hopes the space can be used to mark the entrance into the city.

“I’m not particularly sad to see it go, but I’d like for something to be done there, even a pocket park, that would allow us to put up some signage and let people know they’re coming into Decatur,” Floyd said. “It’s never been real attractive.”