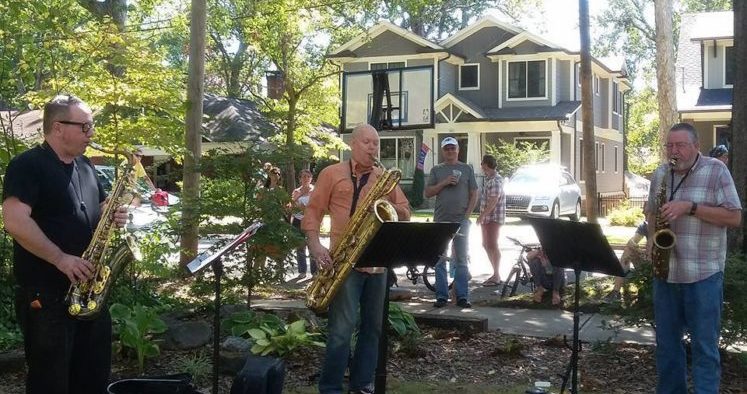 Editor’s note: The author of this story is a journalist who is also a member of The Bitteroots, and he will be backing up another band at this year’s Porchfest.

If it’s October in Oakhurst it’s time for Porchfest.

An all-day event designed to put performers on porches throughout the Decatur neighborhood,  Oakhurst Porchfest is marking its fourth year with its biggest and perhaps most diverse lineup of performers.

And while yes, it’s mostly about the music – bands on porches and audiences in yards – Porchfest has more to offer than singer-songwriters and indie bands, although those are great.

The event kicks off at noon on Saturday, Oct. 13, and continues through 7 p.m.

“Our idea, basically, is to fill porches with the arts,” said Scott Doyon, a co-founder and organizer of Oakhurst Porchfest. “It’s probably as eclectic a mix as it ever is.”

In addition to musical performers throughout the day, this year’s lineup of roughly 230 acts includes two improv comedy troupes.

There are also three a cappella groups, a troupe of Irish dancers, a percussion ensemble and a couple of musicians joining forces for a duet with a theremin and lap steel guitar.

The idea of Porchfest can be traced back to Ithaca, N.Y., and it’s been replicated in over a dozen other neighborhoods across the country. In 2015, with the Decatur Arts Alliance’s Oakhurst Arts and Music Festival called off due to renovations at Harmony Park, Doyon said he proposed hosting a Porchfest instead.

He said Angie Macon, executive director of the alliance, came on board, as did co-founders Nick and Michelle Cavaliere.

As the event has grown, with interest from performers throughout metro Atlanta, organizers have worked to grow the number of stages — er, porches — on which they can play. That growth led to the creation this year of block captains, who can help with organizing their own slice of Porchfest, from ensuring performances in the same geography don’t overlap to serving as a point of contact with public safety workers should any issues arise. The Skylars perform during last year’s Oakhurst Porchfest. The group will be back in the lineup for the fourth year in a row. (Photo by Patrik Tyron)

With the Oakhurst neighborhood carved up into 28 zones, Doyon said there are roughly 96 block captains whose jobs are mostly to make sure the streets are clear and the performers stay in their slots.

Doyon said eventually, if the idea of block captains has legs, Porchfest’s small group of organizers could potentially back away and allow residents of individual streets to organize themselves. That could be far from happening, but Doyon likened it to Halloween, in that Halloween doesn’t have an organizing committee. People just do it. And for now, Doyon and company are going to keep doing Porchfest.

“Oakhurst needs the Porchfest and I ended up doing it, and I’ve got to keep doing it,” he said.

While printed schedules are expected to be available in the neighborhood by Oct. 12, let’s take a look at some of the acts you’ll likely want to catch.

The Edgewood Saxophone Trio – of Jeff Crompton on alto, Ben Davis on tenor and Bill Nittler on baritone – will be returning for the fourth year in a row.

The group started as a quartet about seven years ago, but when the fourth member dropped out, the trio wanted to keep going, Crompton said. “When something like that happens, you have to make adjustments,” he said.

The vast majority of the music the trio performs is original, but the group is also known to throw in some tunes by likes of Ornette Coleman or Steve Lacy.

Crompton said one of his favorite parts of Porchfest is that when his trio is done for the day, he gets to visit other porches in the neighborhood to see what’s happening. “I just want to say, as a musician and a listener, how much I appreciate Porchfest,” he said. “It’s just such a rich environment.”

The Edgewood Saxophone Trio will be performing at 3 p.m. at 232 Sterling St.

While not jazz but perhaps just as experimental, a group coming together for the first time under the name Porch Floyd will be performing the songs of Pink Floyd—specifically “Live at Pompeii” in its entirety, complete with a 36-inch gong.

Drummer Jake Reeves said he and guitarist Willy Tufts have long been fans of Porchfest and wanted to put together a project so they could be a part of it.

The band is rounded out by Dan McCarter on bass and vocals and Christopher Case on keys.

And while they’re not sure what to expect as far as a crowd – after all, the film shows Pink Floyd playing to an entirely empty arena – they’re going to do their part to be as accurate as possible.

“If nobody shows up, it’ll be even more authentic,” Tufts joked.

But this writer is going to do what he can to catch the first ringing notes of “Echoes.”

One of three a cappella groups at Porchfest this year, Octave Atlanta is returning for the fourth year.

An all-female group, Octave Atlanta has been performing throughout metro Atlanta for more than 20 years, though none of its founding members are still in the group, a testament to Octave’s momentum and the passion of its current members.

Becky Penar, the group’s business manager, said the singers find a creative outlet in the group, which performs regularly at festivals, holiday events and corporate parties, and mostly performs its own arrangements. Octave also regularly is called on to perform the national anthem at sporting events and has even had a turn on the stage at the Fox Theatre.

“First and foremost, it’s the music. We all have a real passion for music. It’s important for everybody to keep music a part of their life,” Penar said.

She said Porchfest is one of the highlights of Octave’s annual calendar.

“It’s one of our favorite events to do. It’s such a cool environment and is a really fun event,” she said. “It’s the thing we always – as we plan out our year – we know we’re going to do Porchfest.”

The Skylars perform during last year’s Oakhurst Porchfest. The group will be back in the lineup for the fourth year in a row. (Photo by Patrik Tyron)

Another group with admirable longevity, but on the more rock ‘n’ roll side of things, The Skylarks will also be returning for the fourth year.

Founded in 1992 by husband and wife Michael Hunter and Megan Sexton, the band has always called Decatur home, with its very first gig being at Eddie’s Attic.

A longtime musician, Hunter said when his wife took up the drums and began taking lessons, it seemed a good idea to put together a band they could both be a part of. “We just decided to make it something we both did together,” he said.

If you don’t catch The Skylarks at Porchfest, you might be able to catch them elsewhere in the Atlanta area at one of their six to 10 shows a year, a schedule which is likely to include a stop at some point at Oakhurst’s Kavarna.

The Skylarks will perform for Porchfest at noon at 122 Feld Ave.

A group taking the stage at Porchfest for the very first time as a band will be the worship band of the Church at Old Fourth Ward, a new congregation that is currently taking shape.

Drummer Chris Willey said the band will include five members during the Porchfest performance, but will likely grow to three times that size once the church is up and running. He said many of the musicians playing in the group have performed together in the past in the band at Atlanta West Pentecostal Church.

While they’ve never played Porchfest before, he thought it would be a way to showcase the band and challenge the musicians to work on arrangements that fit the venue.

“Just walking around the neighborhood, it seems like a tight-knit community,” he said.

The Church at Old Fourth Ward Band will perform at noon at 222 Fayetteville Road. 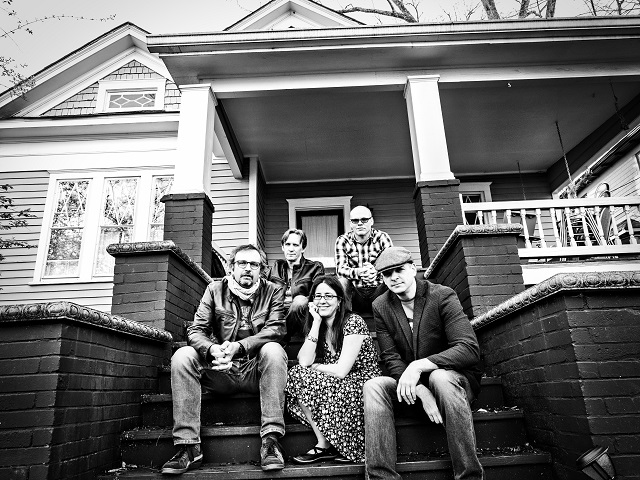 The Porchlighters formed after performing for several years as part of the Oakhurst Porchfest. In the past year, they’ve recorded and released three singles and begun performing regularly in the Atlanta area. (Photo courtesy The Porchlighters)

One of this year’s bands virtually owes its existence to Porchfest. The Porchlighters are a group of neighborhood friends – mostly Georgia Tech faculty – that signed on to play the first Porchfest before they even had a name.

After the third year, singer-songwriter Diley Hernandez said the band decided it was time to build a name and a brand with their modern, original folk sound.

“It’s been a pretty productive year since the last Porchfest,” Hernandez said. “We are neighbors, we are friends and we became a band because we had this amazing opportunity in this neighborhood.”

Since last year’s Porchfest, The Porchlighters have recorded and released three singles and played a number of shows, including sets at Kavarna and during Little 5 Arts Alive.

The Porchlighters will perform at 4 p.m. at 241 East Lake Dr. The brokenmusicbox will be among more than 200 acts performing Oct. 13 as part of the fourth annual Oakhurst Porchfest. They begin at 3 p.m. at 712 S. McDonough St. (Photo courtesy: The brokenmusicbox)

Those who attended Porchfest in 2016 may remember The brokenmusicbox, which will return this year with its mellow folk sound.

A project of Kimberly Contreras and Tony Wentzel, The brokenmusicbox started in 2003 when the pair were working together in a recording studio. Their first album, “Waking the Sound,” was released in 2008.

Contreras said after attending the first Porchfest in 2015, she knew it was an event she wanted The brokenmusicbox to be a part of.

“We love that you can walk around without much of a plan and there is always something to see and hear. It is like a living, breathing art gallery,” she said. “The idea of music as art with no pretense or expectation. We are not the type of band who plays a lot of shows, but this setting seemed appropriate for what we do. I think it’s really neat that Porchfest nurtures that type of freedom of expression. It deeply resonates with all the reasons I was inspired to play music in the first place.”

The brokenmusicbox will be performing at 3 p.m. at 712 S. McDonough St.

For more information on Oakhurst Porchfest and a Google map of the full schedule, visit www.oakhurstporchfest.org.