The U.S. Department of Education’s Office for Civil Rights has opened an investigation into an allegation that a transgender student assaulted a girl in the Oakhurst Elementary school bathroom.

The incident, which came to Decaturish.com’s attention at the beginning of the year, was investigated by social service agencies after it happened. The allegation was determined to be unfounded. Shortly after the allegation surfaced, a post about it circulated on social media. The post was created by a parent opposed to City Schools of Decatur’s transgender students policy.

Decaturish.com did not report the unfounded allegation in order to avoid unfairly stigmatizing the transgender community. District officials and the police report indicate the student accused of the assault is male and does not identify as transgender or gender fluid.

Vernadette Broyles, an attorney representing a group of parents opposed to City Schools of Decatur’s Transgender students policy, filed the complaint on behalf of the other student involved. Broyles is allied with the group Alliance Defending Freedom, which is also backing the complaint. The Southern Poverty Law Center identifies the organization as a hate group.

The complaint alleges that, “On November 14 or 15, 2017, five-year-old [Victim] was permitted to leave class to go to the restroom. While she was out of the room, the Assailant was also permitted to leave the classroom to go to the restroom, and followed [Victim] into the girls’ restroom. No one else was present. As [Victim] was emerging from a stall, the Assailant pushed her against a wall, pushed his hand between her legs, and repeatedly felt and poked at her genitals, [REDACTED], while she struggled and called out for him to stop. No one came to help. Upon returning to the classroom, neither child said anything to the teacher about the events in the restroom.”

The complaint goes onto allege that, “So far as we are able to tell, the Oakhurst Elementary leadership, and the Decatur Schools leadership as a whole, never initiated any significant investigation of this Assault. Indeed, an administrator at Oakhurst Elementary told [Mother] that no one associated with the school ever questioned the Assailant about the allegations—an essential step in even the most rudimentary investigation.”

Oakhurst Elementary said several agencies did investigate the matter and determined the complaint to be unfounded.

Lt. Jennifer Ross with the Decatur Police Department explained in January how a police investigator responded to the incident.

“On November 17, 2017, SRO Damico met with staff at Oakhurst Elementary School in reference to a previous incident,” Ross said. “Staff advised a parent reported that on November 16, 2017 her 5-year-old daughter disclosed that a male classmate, who is also 5-years-old, made non-consensual sexual contact with her while inside of the girl’s restroom on November 10, 2017.  Due to the suspect’s age there will be no criminal prosecution regarding the incident.  Referrals were made to the Department of Family and Children’s Services.”

In February, the school’s principal sent a letter about the incident to parents.

In a letter to parents, the school ‘s principal said, “It has come to my attention that a rumor is circulating regarding an alleged incident at Oakhurst Elementary. The rumor purports that one student assaulted another student in a restroom this fall. Although an incident was alleged, a thorough investigation involving Oakhurst administrators, central office staff, law enforcement, and social service agencies led us to confidently determine that the allegation was unfounded. I can imagine how alarming such a rumor would be to anyone who might have heard it and for those of you hearing this now for the first time. I can assure you that we have a strong plan in place that keeps our students’ safety as our top priority. If you ever have any questions or concerns, please contact me directly. Thank you.”

Aside from the report that was determined to be unfounded, there have been no other reports of sexual assaults occurring at City Schools of Decatur as a result of its policy surrounding transgender students. In a 2016 memo, Superintendent David Dude told staff that he expects students to be addressed using their preferred gender identity and that students should be allowed access to facilities – like restrooms – and activities based on their preferred gender identity. The School Board’s Policy has included protections for transgender students for well over a decade.

Broyles, and a coalition of parents and activists, complained about the policy last year in a long and emotional public meeting, but the issue had seemingly died down since that meeting.

The U.S. Department of Education’s Office for Civil Rights said it would appoint a neutral fact finder to investigate the incident.

A CSD spokesperson said the school system could not comment on the specifics of the allegation.

“City Schools of Decatur is committed to supporting all students,” the spokesperson said. “We are aware of the unfounded allegations made by the Alliance Defending Freedom. We fully disagree with their characterization of the situation and are addressing it with the Office of Civil Rights. As this is a pending legal matter, we have no further comment at this time.”

To see a copy of the complaint, click here.

To see a copy of the response from OCR, click here.

More information: Here is the post that was circulated on social media earlier this year. The names have been redacted because the people involved have not had an opportunity to comment yet. 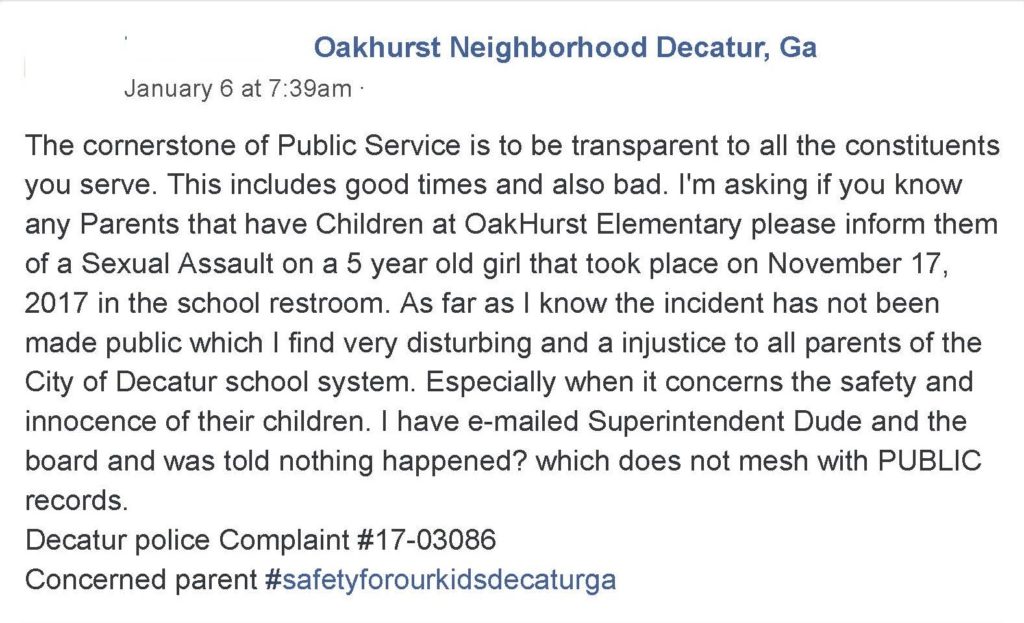 Here are copies of the incident reports obtained by Decaturish. The alleged victim’s name has been redacted. 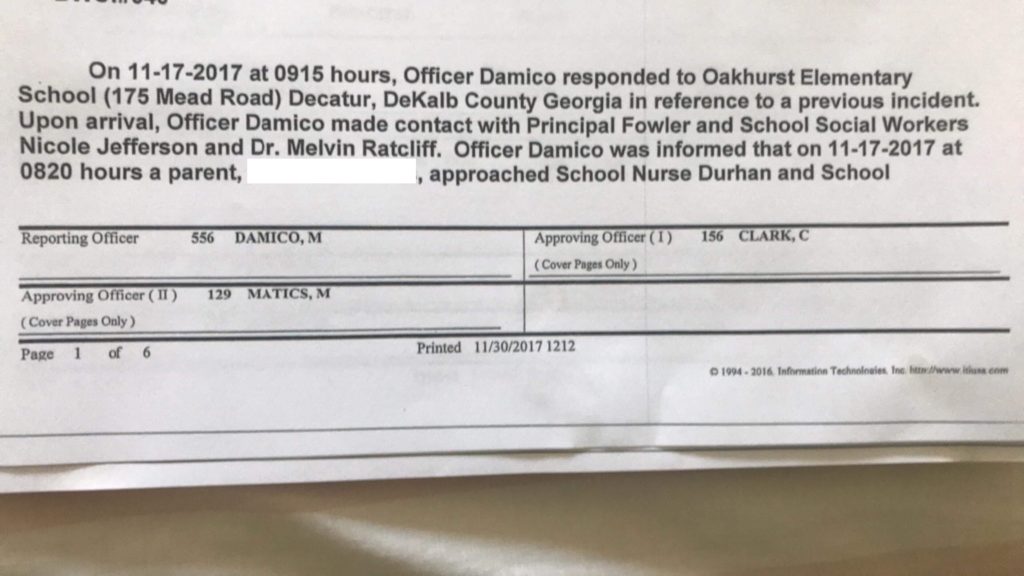 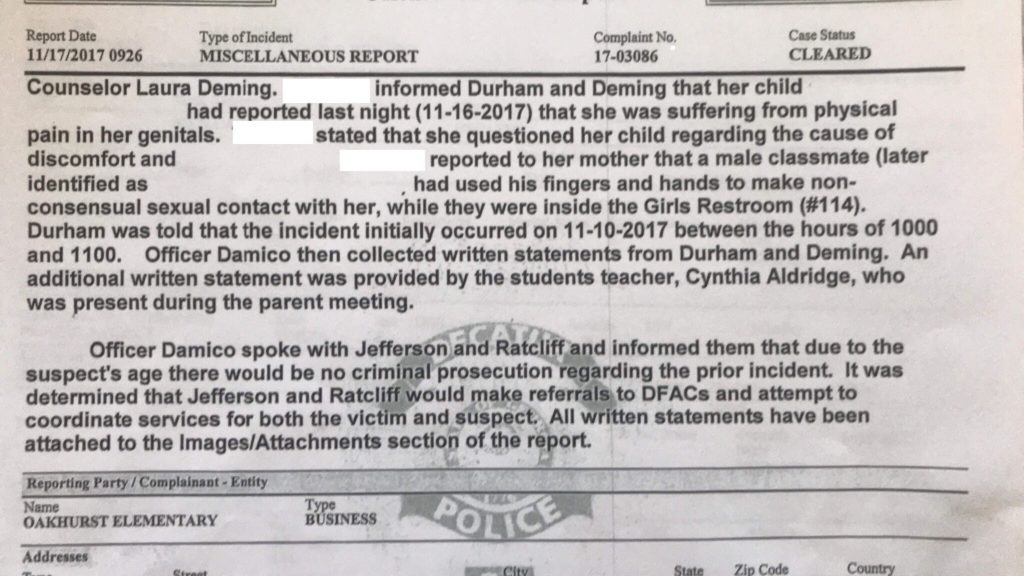