An unidentified HBO series is filming in Decatur. Could it be ‘Watchmen?’

An unidentified HBO series is filming in Decatur. Could it be ‘Watchmen?’

A reader noticed an odd scene in Decatur on Tuesday,  Nov. 6.

The reader said in downtown Decatur she saw, “Tulsa police cars, a hearse, a casket covered by an American flag and reserved event parking on the street near Ebster gymnasium.”

The reader asked, “Is an official from Tulsa being laid to rest here?”

Reader Angela McCallister Huff sent in this photo of the procession. 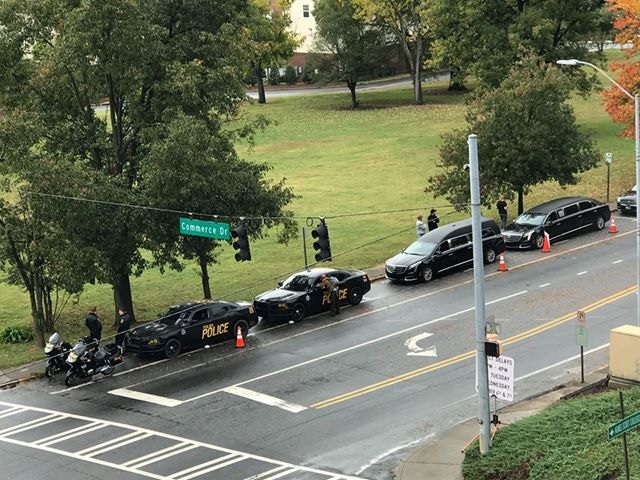 No, it’s a film shoot, city officials said. And what is filming in downtown Decatur today?

“All I can tell you is that it is a scene for a HBO series,” Downtown Program Manager Shirley Baylis said.

It’s an unusual response, because the city usually confirms whatever is filming on location in Decatur.

So what’s filming in Decatur?

The Tulsa World in Tulsa, Okla. provided a hint. The paper reports that the “Watchmen” HBO series will take place in Tulsa.

For those of you who don’t now, “Watchmen” is Alan Moore’s genre-bending graphic novel that envisions a future where heroes have been outlawed and the most powerful superhero is an agent of the government. Its depth, length and plot structure have made the graphic novel notoriously un-filmable, though Zach Snyder gave it a shot in 2009 with mixed results.

“Watchmen” is mostly set in New York. It’s unclear why the HBO series would be set in Tulsa.

But the Tulsa World reports that there’s filming going on in Macon, Ga. as well.

“Unofficial set photos leaked out showing the town is intended to be Tulsa. One of the photos shows a copy of the Tulsa World and a copy of a fictional newspaper, the Tulsa Sun,” the newspaper reports.